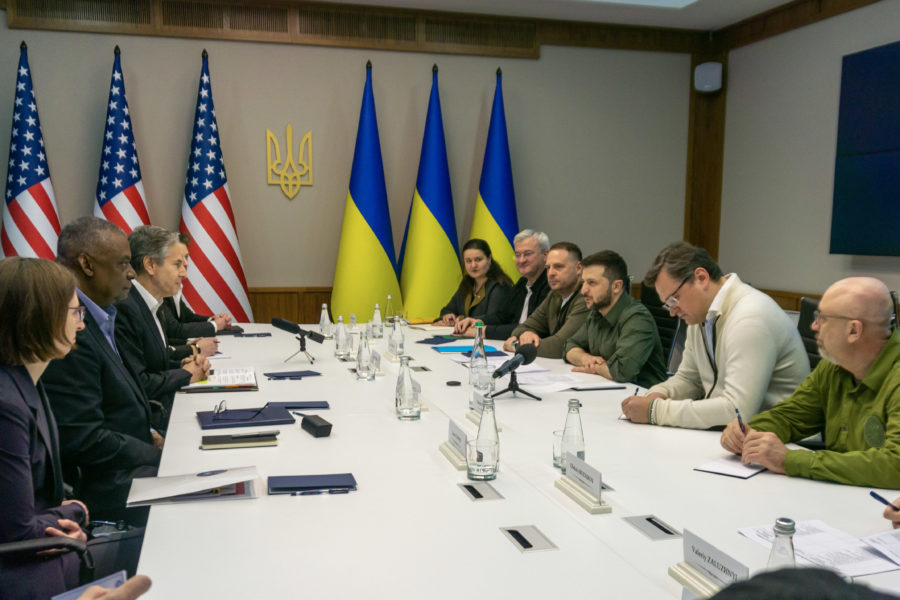 Defense Secretary Lloyd J. Austin III and Secretary of State Antony Blinken crossed the Polish land border into war-torn Ukraine April 24 just before Russian attacks on five railway stations in central and western Ukraine. In Kyiv, Austin and Blinken met firsthand with the Ukrainian president, defense and foreign ministers, promising sophisticated new weaponry and the training to use it.

“We want to see Russia weakened to the degree that it can’t do the kinds of things that it has done in invading Ukraine,” Austin reportedly said April 25, according to media reports from southeastern Poland after returning from Ukraine.

More than $713 million in new Foreign Military Financing announced by the State Department will include funding for advanced weapons and air defense systems. That comes in addition to $800 million in defense assistance announced by DOD April 21.

Austin told Ukrainian officials that the Department of Defense will expand military training for Ukrainian service members in the region on the new weapons systems. The U.S. will also deliver sophisticated new weapons, like the Air Force’s drone “Phoenix Ghost” revealed at the Pentagon April 22.

More than $322 million in FMF will provide new capabilities and training to Ukraine’s Armed Forces on advanced weapons and air defense systems. Hundreds of millions of dollars more will backfill the allies and partners in the region who have donated their own stocks, including Soviet-era weaponry, to Ukraine.

U.S. European Command, meanwhile, will continue coordinating the shipment of heavy weaponry, ammunition, and spare parts from other allied and partner nations, as it has been through various secret locations along the NATO border with Ukraine.

Ukrainian President Volodymyr Zelenskyy revealed the secretive high-level meeting in a press conference April 23, blowing the cover of the first American delegation since the start of the war with Russia Feb. 24. However, the U.S. had planned for several contingencies, including having details of the trip leaked to the public, and the cabinet officials were able to continue on, reported the New York Times.

Austin and Blinken met with Zelenskyy, Ukrainian Defense Minister Oleksiy Reznikov, Chief of Defense Gen. Valeriy Zaluzhny, Foreign Minister Dmytro Kuleba, and others before slipping back across the border into NATO territory and meeting with members of the press.

While in Kyiv, Blinken promised a return of American diplomats to Ukraine this week, and said President Joe Biden had nominated U.S. ambassador to Slovakia Bridget Brink to serve as the next U.S. ambassador to Ukraine, according to a statement from State Department spokesman Ned Price.

The U.S. has committed more than $3.7 billion in security assistance to Ukraine since the start of the war. That assistance is now reaching a level of sophistication never before seen. In the months since October 2021, U.S. defense assistance has evolved rapidly from anti-tank Javelins to Stinger air defense systems, to a recent announcement that Ukrainians will be trained in the operation of Howitzer long-range artillery systems.

Ukrainians artillery soldiers have already completed the first round of training to use the howitzer systems, according to reports.

Beyond stunting and rolling back Russia’s advance in Ukraine, Austin said the aid is meant to prevent Russian President Vladimir Putin from retaining the firepower to instigate conflict again.

“It had already lost a lot of military capability and a lot of its troops, quite frankly, and we want to see them not have the capability to very quickly reproduce that capability,” the Secretary added in comments to media from a warehouse filled with assistance for Ukraine.

Russia’s strikes on Ukrainian railways in the center and west of the country could pose a new challenge and Ukraine’s ability to receive the defense assistance pouring in from the west. But the Russian attack appears to have been met by a similar Ukrainian attack on Russian supply lines with fires burning at the Russian oil depot at Bryansk, some 40 miles inside Russia.

Austin plans to meet with more than 20 nations at Ramstein Air Base, Germany for a Defense Consultative Meeting April 26 that will chart out enduring defense assistance for Ukraine.

“The first step in winning is believing that you can win,” Austin reportedly told reporters in Poland before flying to Ramstein. “We believe that they can win if they have the right equipment, the right support.”