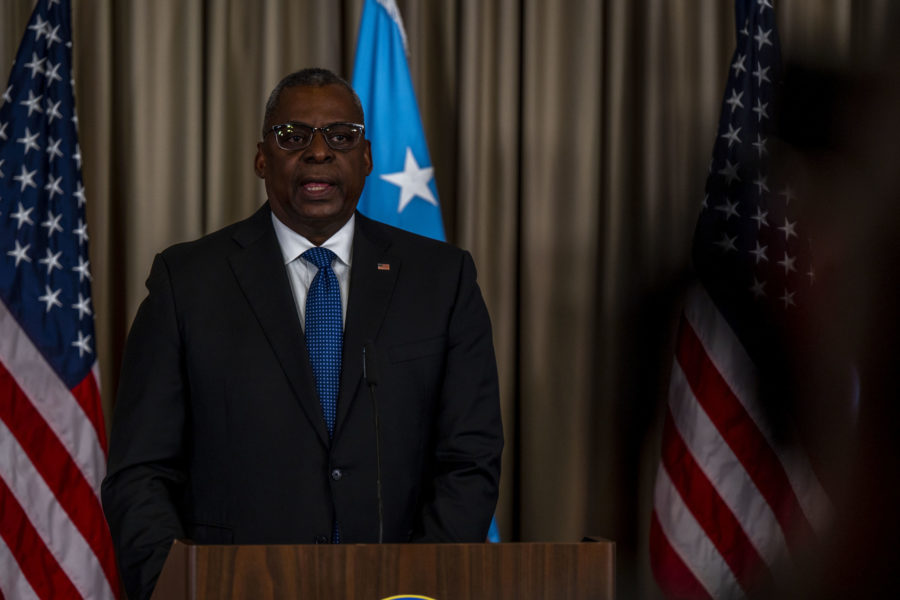 The Department of Defense also announced another $675 million drawdown of security assistance for Ukraine, including more artillery, munitions, and High-speed Anti-Radiation Missiles (HARMs) for the fight against Russia.

That drawdown, the 20th authorized by President Joe Biden’s administration, brings the total security assistance authorized since Russia’s invasion began at around $14.5 billion. The full list of equipment and weapons in the package include:

The bigger chunk of funds allocated Sept. 8, however, came when the State Department announced it will make $2.2 billion available for long-term investments under Foreign Military Financing—roughly half for Ukraine and half for 18 other nations in the region.

At the same time, Defense Secretary Lloyd J. Austin III and Chairman of the Joint Chiefs of Staff Gen. Mark A. Milley traveled to Ramstein Air Base, Germany, where they met with the Ukraine Defense Contact Group, a consortium of about 50 countries. In the group’s fifth meeting, the emphasis was on supporting Ukraine “over the long haul,” Austin said in a press briefing.

Six months after Russia’s full-scale invasion began, many countries “continue to dig deep and provide equipment out of their own military stocks,” Austin noted. In particular, Austin praised the Czech Republic, Poland, and Slovakia for “reinvigorating their industrial bases to meet Ukraine self defense needs.”

But with more than a dozen other countries also slated to get long-term investments and other European nations looking to ramp up their defense spending as well, Austin said planning is underway to coordinate how different countries’ defense industrial bases can work together.

“In the next few weeks in coordination with NATO, the United States will host a special session under the auspices of this contact group to bring together our senior national armaments directors, and they will discuss how our defense industrial bases can best equip Ukraine’s future forces with the capabilities that they need,” he said.

Not only will Ukraine’s future needs be considered, Austin added. Members of the Contact Group want to ensure their own stockpiles remain robust as they support Ukraine. For the U.S., in particular, senior leaders have insisted for months the aid given to Ukraine won’t deplete the Pentagon’s stockpiles. A recent report from the Wall Street Journal, however, indicated there is some concern within DOD about the levels of some munitions.

“We all believe that working together, we can better streamline things—we can shorten acquisition times, perhaps work on supply chain issues, learn from each other,” Austin said of the Contact Group.

And not only will Ukraine benefit from that cooperation and increased investment, Austin argued—“NATO writ large” will benefit if leaders can increase interoperability down to the industrial base level, he said.

While the focus of the contact group meeting was on Ukraine’s long-term future, the conflict continues to grind. Recently, the Ukrainians launched a counter-offensive meant to push Russia out of occupied territory in the east and south of the country, Milley confirmed.

That counter-offensive’s movement has been slow but steady, according to observers, and Milley pushed back when a reporter asked if progress has been modest or moderate.

“I would characterize it as a very deliberate offensive operation that is calibrated to set conditions and then seize their objectives,” Milley said. “We think at this point that their progress—you mentioned the word modest or moderate—their progress is steady, and it’s deliberate.”

The ability to achieve air superiority and control airspace over a war zone is a key U.S. military strategy and in some cases has been the primary means of achieving military objectives, such as when NATO intervened to stop Serbia's war in Kosovo and the counter-ISIS campaign in Syria. But…

The Ukrainian Air Force has withstood six months of war against a much larger and more sophisticated Russian force, but U.S. lawmakers worry Russia could gain air superiority as the war grinds on unless Ukrainian pilots are equipped and trained to fly modern Western aircraft, such as the F-16. Romania,…

After three months in Europe, Airmen from the Vermont Air National Guard and their F-35s returned home in early August, completing the first overseas deployment of the Guard’s first F-35 unit. Their presence in the region was needed to relieve F-35s from the 34th Fighter Squadron at Hill Air Force…

President Joe Biden is making a bet on Ukraine’s ability to withstand war and deter Russia for years to come, announcing on Ukraine Independence Day, Aug. 24, a $2.98 billion defense package that builds out a future force with high-end air defenses, radar, and counter-unmanned aerial systems that may take…

A new $775 million security package to help Ukraine fight Russia includes 15 ScanEagle unmanned aerial systems for intelligence, surveillance, and reconnaissance that a Pentagon official said “will enable the targeting of the whole host of artillery capabilities that Ukraine has available.” The official said the ScanEagle systems will “give…