Skip to content
During the event, a recent graduate of the USAF Weapons School's F-16 Weapons Instructor Course went head-to-head with an artificial intelligence algorithm in a dogfight—and lost. Zoom screenshot.
Expand Photo 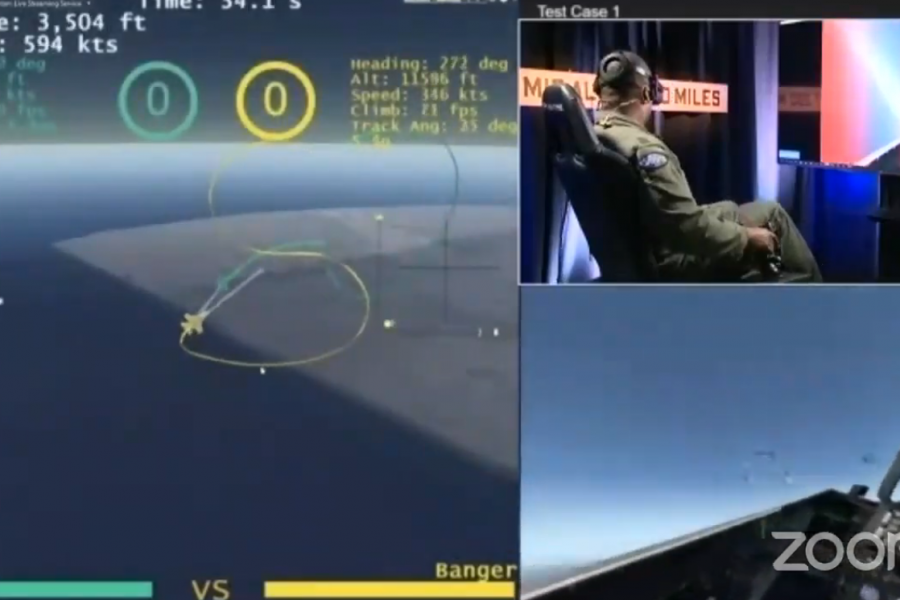 In the battle of artificial intelligence versus a human fighter pilot, it wasn’t even close.

The artificial intelligence algorithm, developed by Heron Systems, swept a human F-16 pilot in a simulated dogfight 5-0 in the Defense Advanced Research Projects Agency’s AlphaDogfight Trials on Aug. 20. The company beat out seven other companies before going head to head with “Banger,” a pilot from the District of Columbia Air National Guard and a recent graduate of the Air Force Weapons School’s F-16 Weapons Instructor Course. The pilot, whose full name was not provided, is an operational fighter pilot with more than 2,000 hours in the F-16.

Banger and Heron Systems’ AI fought in five different basic fighter maneuver scenarios with the simulated fight only using the Fighting Falcon’s guns, and each time the AI was able to out maneuver and take out Banger. The algorithm operated within the limits of the F-16—meaning it did not pull Gs beyond what a real-world aircraft could do. However, Banger said after the event that the jet was not limited by the training and thinking that is engrained in an Air Force pilot.

For example, Air Force Instructions outline how an F-16 pilot performs basic fighter maneuvers and establishes some limits such as not passing within 500 feet or a limit on the angle of attack when firing the gun. The AI did not need to follow these instructions, which helped it gain an advantage. Pilots habits are built based on procedures and adhering to training rules, and the AI exploited that.

The AI also is able to make adjustments on a “nanosecond level” where the human “OODA loop”—observe, orient, decide, and act—takes longer, giving the algorithm another advantage.

Banger survived longer in each successive round, though he was not able to hit the AI’s F-16, which was “flying” with the callsign “Falco.” He started the contest following the basic rules, and in following rounds tried to learn the methods of the algorithm, which flew more aggressively.

Col. Daniel Javorsek, the program manager of DARPA’s Air Combat Evolution Program, which includes the AlphaDogfight, said the goal of the event was to increase the confidence of the feasibility of using artificial intelligence in combat aircraft. If the event was able to convince just a couple pilots, “then I’m considering it a success. That’s the first steps I need to create a trust in these sorts of agents.”

The Air Combat Evolution program seeks to automate air-to-air combat, eventually moving on to subscale aircraft, including one that is propeller driven and another that is a miniature jet, to learn to differentiate the abilities of the two types. This phase is scheduled to wrap by 2021. DARPA then plans to move on to larger aircraft before potentially giving the program to the Air Force in 2024.

Javorsek said Aug. 20 that if DARPA had a perfect, ready-to-go system today it would take about 10 years to actually put it in a combat fighter jet like an F-15 or F-16. Most likely, it will end up in an unmanned system with the initial “stronghold” for the capability being more advanced tactical “autopilots.”

“A fully autonomous Heron flying the entire airplane (system) is still quite a ways off,” he said, adding the goal is to see “if this is even feasible right now.”