Fifty Years of Mission in the Mountain 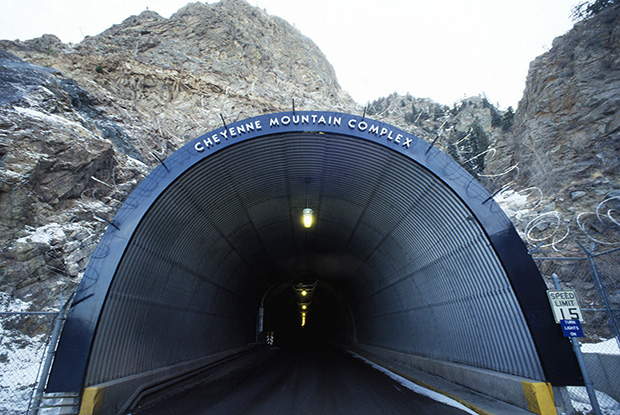 It was an apocalyptic idea born of the Cold War: Build a command and control center deep inside a mountain, shielded from Soviet nuclear weapons by more than a thousand feet of solid rock. Between June 1961 and April 1966, nearly 700,000 tons of granite were blasted and excavated from the chosen site, in the front range of the Rocky Mountains near Colorado Springs, Colo. At the end of that effort, Cheyenne Mountain Air Force Station went operational.

“America’s Fortress” celebrated its 50th birthday this year. The facility carved out in the era of “duck and cover” and featured in movies like “WarGames” is far from being retired as an Atomic Age relic, however. In fact, officials say Cheyenne Mountain is busier today than it was during the Cold War.

Robert E. Thibault was one of five airmen who worked the first night shift at the North American Aerospace Defense Command Combat Operations Center inside “the mountain” in 1966. At the April 15, 2016, anniversary ceremony, the 79-year-old retired master sergeant remembered having to wear a yellow hard hat that first night because bits of rock were still falling from the ceiling.

Thibault worked as a surveillance operator, processing data inside the mountain for four years. One night, at 3 a.m., a colonel walked up to him and gave him his next assignment. He went to work at a Canadian air force base for four years before returning to Cheyenne Mountain in 1973. He was still working there when he retired in 1977.

Touring the facility recently, Thibault said it’s really changed since the early days. The command post area is so different he didn’t even recognize it.

Gen. John E. Hyten, the head of Air Force Space Command, served as a mission director in the mountain from 1994 to 1996. At the anniversary ceremony, he said there’s “no feeling like walking into the mountain to go to work every day to protect your nation.”

Being a mission director at Cheyenne Mountain “makes you look at this mountain differently than a lot of people do,” Hyten continued. “When I stand in its shadow, I don’t just see a mountain. What you see behind is a citadel of granite, forged for our common security against America’s worst threats.”

Hyten said he and Thibault both fielded late-night phone calls from the public about UFOs—calls that were amusing and diverting in the middle of a long shift. Less entertaining, Hyten said, was a call Thibault got after a malfunction caused a missile-tracking monitor to go blank. On the other end of the line was the unmistakable voice of then-Air Force Chief of Staff Gen. Curtis E. LeMay.

“I can’t even imagine how frightening that call must have been,” Hyten said.

William Bunker, who served in the mountain from 1966 to 1967 and from 1968 until his retirement as a staff sergeant in 1970, also attended the ceremony. Hyten said Bunker was a member of the 61st Air Force Police Squadron and “played hide-and-seek for training” inside the facility.

Bunker, Hyten said, “witnessed the deafening silence of blackouts while trying to navigate the caverns. He even remembers using emergency tunnels to exit the facility.”

It cost $142 million to build the 5.1-acre complex, wedged beneath 1,800 feet of rock. The facility comprises 12 three-story and three two-story buildings resting on 1,319 giant steel springs, to cushion the shock of nuclear blasts a quarter-mile above. The main work center of the mountain looks like the inside of a ship, because it was designed by Navy ship builders.

Blast doors, each 3.5-feet thick and weighing 25 tons, were often closed during the Cold War, but last slammed shut on Sept. 11, 2001. Now, they remain open around the clock.

In 2006, most of the work inside the mountain was shifted to nearby Peterson AFB, Colo., and the Washington Post reported the underground war room was on “warm standby.” In 2008, though, on the 50th anniversary of the NORAD agreement, Cheyenne Mountain was officially redesignated as the NORAD-NORTHCOM alternate command center.

At the time of the contract award, Adm. William E. Gortney, then commander of NORTHCOM and NORAD, told reporters the Defense Department is moving to “put capability” into Cheyenne Mountain because it’s protected from electromagnetic pulse, a real threat no longer seen as just a by-product of nuclear war.

“Because of the very nature of the way that Cheyenne Mountain’s built, it’s EMP-hardened and wasn’t really designed to be that way, but the way it was constructed makes it that way,” Gortney said.

Today, between 350 and 580 people work inside the mountain at any given time. Raytheon is running 24/7 operations to make sure the software powering the command and control systems is working. Probert described this as being like an IT help desk on a grand scale.

“As the Air Force has a changing mission need, it’s on our team to go help migrate those command and control systems to address that need,” he said, noting that the company uses a “modernization through sustainment” model.

Of the available space inside the mountain, NORAD-NORTHCOM missions take up about 30 percent of the real estate, though they only make up five percent of people assigned to the facility. The facility is owned by the 21st Space Wing at Peterson Air Force Base and run by the 721st Mission Support Group.

Col. Gary L. Cornn Jr., commander of the 721st and installation commander for Cheyenne Mountain Air Force Station, said his unit takes care of the facility on all fronts.

“We secure the installation. … We have the communications here that support all the command and control systems and capabilities that are inside Cheyenne Mountain, and then we also have the engineers who support the capabilities inside, that allow us to breathe and support ourselves and endure for a certain amount of time,” he said.

The systems, airmen, and joint partners inside the mountain are collecting data from around the globe—watching North America and making sure nothing is coming toward it—then send the data to places like NORAD-NORTHCOM, STRATCOM, the national command center in the Pentagon, and other command centers in the United Kingdom and Canada.

All of those systems are protected by the granite from attack or EMP and “will continue through whatever happens,” Cornn said.

Steven Rose, deputy director of the 721st, said Cheyenne Mountain, “from strictly an ‘available square footage’ basis,” is now “full.” While he couldn’t discuss plans for future uses or changes to the facility, “we are ‘ready, reliable, and relevant’ now and into the future,” he said.

Over the decades, the threat has changed, Cornn observed, but “the mission has evolved to meet that threat.”

Colorado Gov. John W. Hickenlooper Jr., speaking at the anniversary ceremony, said it has endured in part because “there’s nothing like it on Earth.”

The Cold War was the inspiration, “but 50 years later, this facility is still America’s Fortress, and it’s of continued strategic importance to the entire nation’s national defense,” he said.