Ace in the Hole 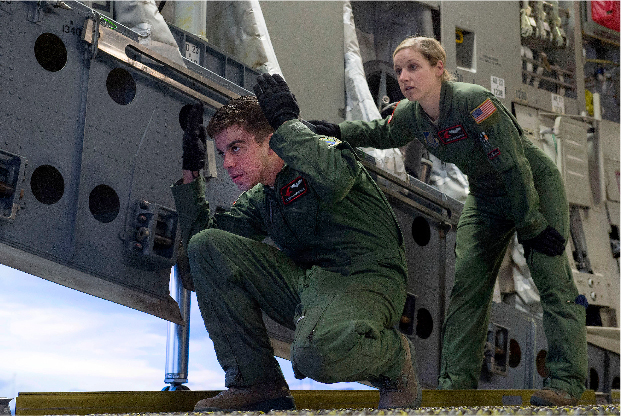 The threats and operational environment in the Pacific Theater have been evolving rapidly. China is ramping up military activity in the South and East China seas, North Korea is growing more aggressive with its ballistic missile launches and development program, and Russia is deploying more long-range aviation assets to the area and flying them in a more aggressive manner.

That’s why Pacific Air Forces recently validated a new concept called Agile Combat Employment, or ACE. It is intended to ensure all forward deployed forces are ready for a potential contingency with little notice.

“As we continue to focus on our readiness and credibility of forces deployed forward, we see our adversaries and potential adversaries changing,” said Pacific Air Forces Commander Gen. Terrence J. O’Shaughnessy at AFA’s Air Warfare Symposium in Orlando, Fla., in March. “We see they have potentially shrunk the theater. For example, folks in Alaska and Guam are now on the front lines.”

As of early March, North Korean leader Kim Jong Un had already fired 117 ballistic missiles in just five years of rule. That’s an enormous increase from his father, Kim Jong Il, who fired 34 ballistic missiles over the course of 17 years. On March 6, the rogue regime fired off a salvo of five missiles toward Japan, in what North Korea described as “practice” for an attack on US bases in Japan. Four of the missiles landed in the sea near Japan; one failed to leave the launch area.

China continues to build up runways and military facilities on three man-made islands of dubious legality in the South China Sea. In response, Vietnam is extending a runway on one of the islands it claims in the South China Sea, with some think tanks estimating the runway could be extended from less than 2,500 feet to more than 4,000 feet. This would enable maritime surveillance aircraft, transport planes, and combat aircraft to operate from the island.

Russia, too, is expanding its presence in the region. The Russian Defense Ministry announced last year the formation of a new heavy bomber air division, to be located in the country’s far east and made up of Tu-95MS strategic missile carriers and Tu-22M3 long-range bombers. Russian state media reported the aircraft would be tasked with patrolling the Pacific near Japan, Hawaii, and Guam. Russia also is conducting military exercises with China.

Considering these operational developments, “the risk of tactical miscalculations that result in a strategic situation that’s adverse to the United States is becoming more and more real,” O’Shaughnessy said.

The Air Force continues to work on its agility so it can meet these new challenges and it is changing the way its forces operate. Instead of sending a whole squadron of F-22s, USAF may now deploy a smaller cadre of F-22s along with a smaller logistics tail.

That was the thinking behind the Rapid Raptor concept, which was first introduced in 2013. The Air Force has tested that concept several times since then, but is now looking to take it a step further.

Agile Combat Employment builds on Rapid Raptor, which focused mostly on logistics and fuel. “Now we’re taking it to the larger concept of, ‘How do we operationally maneuver that? How do we work the command and control for that? How do we make sure that the aircraft that are out, potentially in smaller locations, still tie into the bigger picture?’?” O’Shaughnessy said.

The command tested pieces of ACE with the recent deployment of F-22 Raptors to Australia in February for the Avalon Airshow in Geelong.

Twelve F-22s from the 90th Fighter Squadron at JB Elmendorf-Richardson, Alaska, flew to RAAF Base Tindal, Australia, a typical forward operating base. From there, two F-22s proceeded to the much smaller RAAF Base Townsville, where they conducted a bare-base operation, said O’Shaughnessy. The goal was to exercise the ACE concept of operations “by concurrently conducting fifth generation fighter operations from a main operating base and a forward, austere operating base,” according to PACAF.

The fifth generation fighters brought just one C-17 and one KC-135 with them. After landing, however, as a support team established mobile secure communications with the 613th Air and Space Operations Center (AOC) at JB Pearl Harbor-Hickam, Hawaii, maintainers refueled the F-22s on the ground from the C-17’s wing tanks. O’Shaughnessy said under ACE it is possible the Navy or Army might provide fuel bladders to refuel the fighters, noting the concept also can be applied to F-15s, F-16s, or allied aircraft.

In addition to carrying the necessary equipment for the Raptors, the C-17 can be used for command and control, ensuring a mission commander is always connected. During the recent deployment to Australia, O’Shaughnessy said an F-22 pilot rode on the C-17 and remained in constant contact with the 613th AOC. At one point, the pilot received a retasking order from the AOC and relayed that information to the Raptors.

The C-17 also carried missiles that were unloaded once the contingent landed, and crews practiced loading them onto the F-22s. “The pilots used the secure communications to finalize mission planning and launched again in less than three hours to return to RAAF Base Tindal,” according to an ACE fact sheet provided to Air Force Magazine.

O’Shaughnessy said PACAF can take advantage of pre-positioned stock or it could land a joint force, such as Marine Corps or USAF F-35s.

Bringing in the F-35

Brig. Gen. Craig D. Wills, Pacific Air Forces director of strategic plans, requirements, and programs, said USAF has tested the ACE concept on a “very limited basis with F-35s” assigned to Hill AFB, Utah—the Air Force’s first operational unit—during a deployment to Mountain Home AFB, Idaho. Although the service is currently focused primarily on introducing the F-35 in to the fleet, Wills said the command intends to expand the “scope and scale” of the F-35’s participation in ACE in the coming months and years.

ACE provides more flexibility by enabling US forces to operate just about anywhere in the Indo-Asia-Pacific, even though there may not be a lot of established infrastructure or the environment may be contested.

“We’re looking to find things like air superiority. … In recent history we’ve always been able to get that relatively [easily]. That won’t always be the case in the future,” said O’Shaughnessy. “We have to make sure we have the ability to project power within the Pacific. We have to make sure we’re able, through operational maneuver, … to maintain air superiority even though our adversaries may be trying to set up an A2/AD [anti-access, area denial] type environment.”