And Then There Were Four 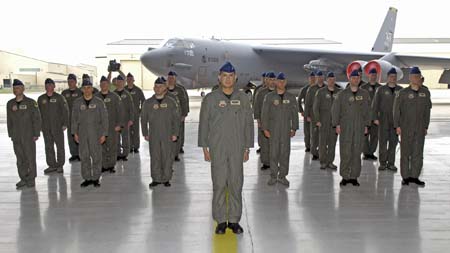 The Air Force re-activated the 69th Bomb Squadron as its newest operational B-52H bomber unit during a ceremony Thursday at Minot AFB, N.D. North Dakota Governor John Hoeven (R) and Maj. Gen. Floyd Carpenter, commander of 8th Air Force, the parent organization of Minot’s 5th Bomb Wing, were in attendance. The newly reconstituted 69th BS, USAF’s fourth combat-ready B-52 unit, is a component of Minot’s 5th BW. Within the next 60 days, the squadron is expected to undergo its initial nuclear surety inspection, wing spokeswoman Laurie Arellano told the Daily Report Thursday. The unit, currently with four aircraft, is also slated to participate in next month’s Red Flag-Alaska. It will reach full operational capability by October 2010 with the arrival of its remaining B-52s, which will come from Barksdale AFB, La., Arellano said. (For more, see Minot’s release and our earlier coverage.)