Skip to content
Tail 052 comes to a stop on the 916th Air Refueling Wing ramp at Seymour Johnson Air Force Base, N.C., on Sept 11, 2020. The aircraft was one of two delivered that day from Boeing Air Field in Seattle, Wash. Air Force photo by Ashley Snipes.
Expand Photo 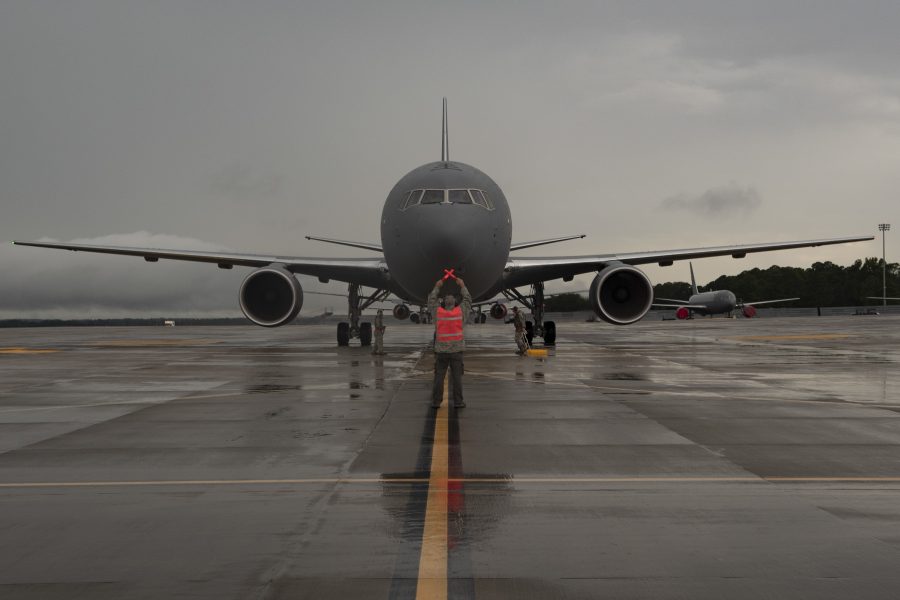 The Air Force in the coming weeks will evaluate an interim fix to the KC-46’s troubled remote vision system to see if there would be any value gained, while still holding Boeing to its requirement to provide a broad, permanent fix to the system by 2023.

In April, Boeing and the Air Force announced an agreement on fixing the remote vision system—a collection of cameras and sensors linking the boom operator in the front of the aircraft to the boom system to refuel aircraft. The system has long been troubled by unclear and skewed images, in turn causing the boom to strike outside of a receiving aircraft’s receptacle. The Air Force has said this is the biggest problem on the aircraft, and without a fix the Pegasus cannot be operational.

Air Mobility Command boss Gen. Jacqueline D. Van Ovost recently visited Boeing, and saw progress on the RVS replacement, called RVS 2.0. The replacement includes an overhaul of the plane’s technology, including 4k color cameras, larger high-definition screens for the boom operator, augmented reality, and a laser ranger for refueling aircraft distance measurement. The company has made progress on down selecting the systems that would be installed, and aims to have 12 aircraft kits delivered in 2023, with installations beginning on the production line in 2024. All changes to the system will be at Boeing’s expense.

“I’m very encouraged with the open collaboration between Boeing and the Air Force on that,” Van Ovost told reporters Sept. 14 as part of AFA’s virtual Air, Space & Cyber Conference. “Boeing has stated that they would be able to provide us up to 12 ship sets by 2024, and we’re going to hold them to that and we will do everything we can to accelerate.”

Boeing’s shorter-term fix, originally called RVS 1.5 but now referred to as the “interim Enhanced RVS,” uses incremental software and hardware updates to enhance the quality of the video feed, and Boeing has said it could be fielded in the second half of 2021.

Van Ovost said she saw a demonstration of this unfinished capability, and it did show some sharper images.

“But the proof is in the pudding when it comes to whether or not it actually would provide operational additional capability, or additional safety to the boom operator and to our receiver aircraft,” she said.

Air Mobility Command in a matter of weeks will receive a “package” with all the data on the effectiveness of this interim fix. AMC and the Air Force Research Laboratory will then analyze it to see if the Air Force should adopt it. The quality needs to be to the level where the Air Force can “open the envelope” on the aircraft types it can refuel. Currently, the KC-46 is operational with its boom and drogue system, but most USAF receiving aircraft, which rely on the boom, are limited in how it can refuel from the Pegasus.

“If I can’t increase operational capability … then there may not be a whole lot of reason to put it on the airplane and retrofit airplanes, because if I have to take airplanes out of cycle to do that, then I have less access to those aircraft,” she said. “So, it’ll be what our boom operators, our testers have to say about the final configuration.”

Additionally, Van Ovost said the interim fix will be a no-go if it would cause the permanent RVS 2.0 fix to be delayed.

“There’s nothing that we would do that would slow down getting to 2.0 and getting it on our airplane,” she said. “That’s the most important thing, to get to the full requirements that we agreed to onto the airplane. RVS 2.0 at no cost to the government.”

The “package” of data will spell out these impacts, and “if it slips RVS 2.0 installation at all, I would not be in favor of slipping because that’s the end game, that’s the requirement that we set out and that Boeing agreed to deliver.”

The Air Force and Boeing are also working toward addressing another “category one” deficiency on the aircraft, a fuel leak in the aircraft’s air refueling receptacle. Boeing has a fix “en route” for this, with a new seal to be installed. There is a “speed line” set up at a company facility in Texas to install the fix, and a plan to install it on the production line, Van Ovost said. About 14 aircraft are affected.

There are now 38 KC-46s in the Air Force’s fleet, with two delivered to Seymour Johnson Air Force Base, N.C., last week. The service is still withholding some funds from Boeing based on the foreign object debris issue announced last summer. The Air Force and Boeing have agreed to five “gates” that the company has to meet to remedy the issue and free up all funding, such as reporting no tools lost or no FOD found in critical areas. One of these is still “open,” Van Ovost said, without providing specifics, and “we both agree, Boeing and the Air Force, to keep that one open until we show a consistent delivery of airplanes with the level of FOD that we’re comfortable with, which in many cases is zero.”