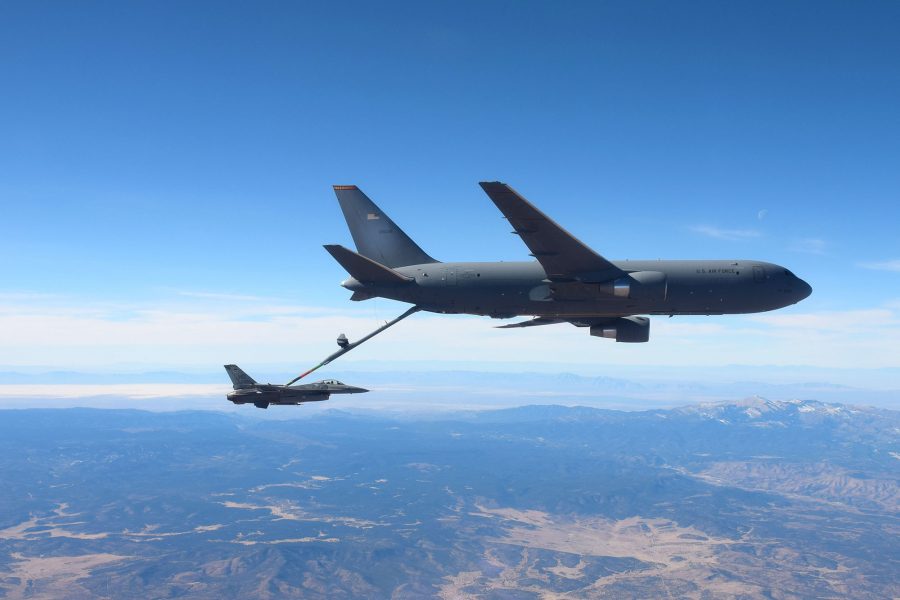 The order is the third “interim capability release” since July clearing aircraft to refuel from the KC-46, which is operationally restricted due to boom operator display problems. The Air Force had been using the aircraft in a transport role before Air Mobility Command issued recent ICRs approving tanking operations for some airplanes.

The first ICR was issued in July and approved the use of the KC-46’s centerline “hose and drogue” apparatus to refuel Navy, Marine Corps, and allied aircraft that use that system. In the hose and drogue method, the receiving aircraft flies a probe into a basket at the end of a fuel hose deployed from the tanker, and the receiving aircraft does all the maneuvering to make the connection.

The second ICR came in August, when then-AMC commander (now TRANSCOM commander) Gen. Jacqueline D. Van Ovost approved several “heavies”—the C-17 airlifter, the B-52 bomber, and the KC-46 itself—to refuel behind the KC-46, using the aircraft’s flying boom system. With the boom method, an operator onboard the tanker flies a hard, telescoping refueling pipe into a receptacle on the receiving aircraft. On the KC-46, the operator is stationed just behind the cockpit and uses a 3-D video display to conduct the refueling. Those displays suffer from latency and blind spots in certain conditions, causing contractor Boeing and the Air Force to restrict the boom’s use.

The latest ICR clears “all variants” of the F-15 and F-16 to tank up from the KC-46, AMC said. The move “allows the Pegasus aircraft to accept operational taskings which would otherwise be filled by the KC-135 Stratotanker and KC-10 Extender, increasing the force’s refueling capacity,” the command said in a press release.

The Air Force is still gauging whether refueling the F-22 and F-35 fighters and the B-2 bomber from the Pegasus is safe. The KC-46 has previously scratched the sensitive treatments on stealth aircraft in testing, potentially compromising their low observability.

“There is no timeline associated with the overall ICR plan,” AMC said in its statement. Rather, aircraft are being cleared to refuel from the KC-46 when it’s deemed safe to do so.

The ICR plan “focuses on establishing incremental confidence measures” that allow the AMC commander “and other senior leaders” to “quantitatively and qualitatively” assess the aircraft’s “achievements at ICR milestones.” Crews flying the KC-46 will continue to “fly training, exercise and demonstration missions until all operational confidence measures are met,” AMC said.