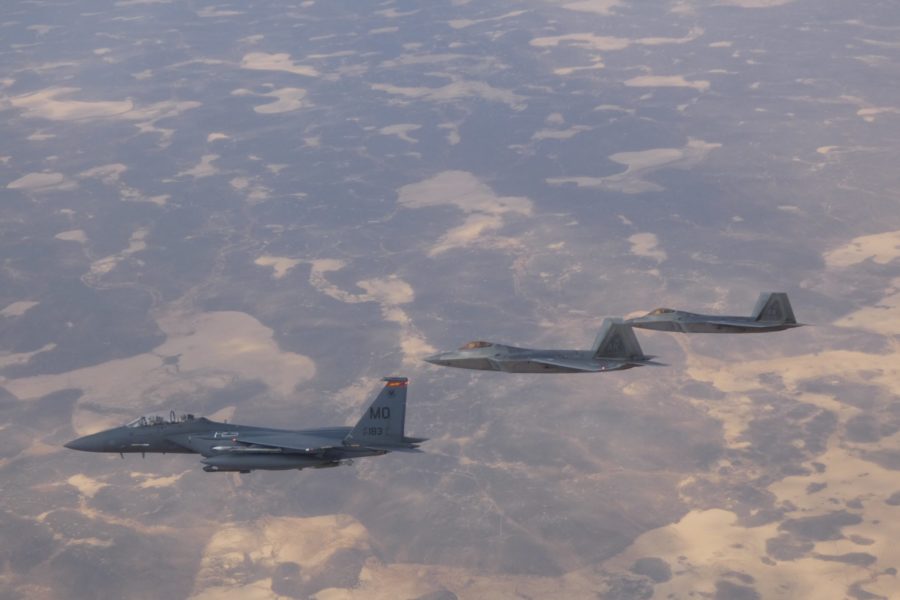 As concerns have risen in Washington about a potential Iranian attack against U.S. partners in the region, F-22 Raptors have deployed to the Middle East and performed operations alongside F-15E Strike Eagles on Nov. 2, according to U.S. Central Command (CENTCOM).

U.S. media reports indicated the previous day that Saudi Arabia was worried about the possibility of an Iranian attack and had shared this information with the U.S.

“We recognize that Saudi Arabia remains under the threat of attack from Iran and from Iran’s proxies, the Houthis in Yemen, and we recognize that there are 70,000 Americans who live and work in Saudi Arabia, including thousands of U.S. troops,” White House National Security Council strategic communications coordinator John Kirby told reporters Nov. 2.

The serial number of the KC-135 Stratotanker refueling one of the F-22s is 23498, which indicates that it is assigned to MacDill Air Force Base, Fla. It has been operating in the CENTCOM area since late September, according to flight tracking data from the website ADS-B Exchange. Tail codes on the F-15s indicate that they are assigned to Mountain Home Air Force Base, Idaho.

CENTCOM did not say when the F-22s had deployed to the region or how many of the stealth air-to-air fighters are now operating there. But F-22s have previously been deployed during a period of high tension. In February, the U.S. sent F-22s to the United Arab Emirates after it was targeted by drone and missile attacks from Iranian-backed Houthi rebels in Yemen.

The Wall Street Journal reported Nov. 1 that Saudi Arabia had recently provided the U.S. with intelligence that Iran may strike Saudi Arabia and Erbil in northern Iraq. The U.S. and Saudi Arabia accused Iran of attacking the kingdom’s oil infrastructure with drones and missiles in 2019.

In March, Iran launched ballistic missile strikes on the semi-autonomous Kurdistan region in northern Iraq. In September, a U.S. warplane shot down an Iranian drone it deemed a possible threat to Erbil. Air Forces Central (AFCENT) regularly conducts counter-drone patrols in the region.

“I think on a daily basis, the threat that we face most—and this is not just U.S. forces or coalition forces that are deployed into the region, but all of our regional partners face—is from the Iranian threat network,” Lt. Gen. Alexus G. Grynkewich, the AFCENT commander, said at AFA’s Air, Space, & Cyber Conference in September.

Nationwide protests against the theocratic government have roiled Iran. Iran’s Islamic Revolutionary Guard Corps has blamed Saudi Arabia, among others, for instigating the protests. The U.S. has said it is reevaluating its alliance with Saudi Arabia after the Biden administration accused the kingdom of cooperating with Russia as part of the OPEC+ oil cartel to keep oil prices high after Moscow’s renewed invasion of Ukraine. However, the U.S. has not officially changed its policy toward Saudi Arabia.

“Nothing’s changed in the relationship as of yet,” Kirby said. “But that is separate and distinct from the fact that we recognize that the threat from Iran is real. We remain concerned about that threat. And we’re going to continue to work not only with our Saudi partners but with other partners in the region to better be able to address that threat.” 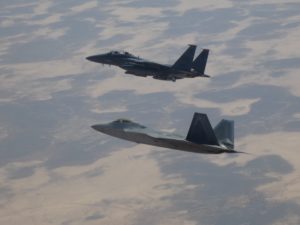 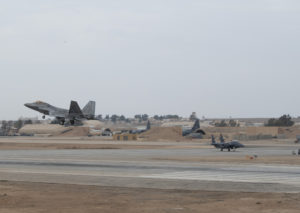 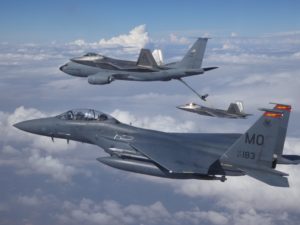