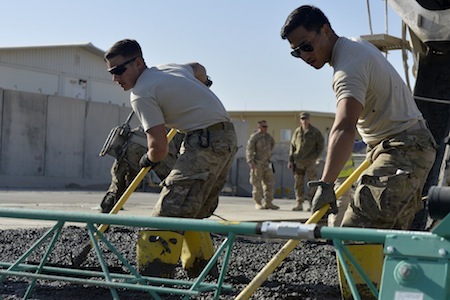 Airmen of the 577th Expeditionary Prime Base Engineer Emergency Force Squadron are helping to erect a new vehicle maintenance facility at Kandahar Airfield, Afghanistan, according to a base release. “The purpose of this construction is so that vehicle maintenance has a facility for all of the 451st Air Expeditionary Wing vehicles, a fleet of about 550 vehicles,” said Capt. Larry Cornelio, officer in charge of the squadron’s Bravo element, in the Jan. 5 release. The airmen on Jan. 4 poured concrete for the foundation of the facility, which will cover approximately 8,000 square feet, states the release. “I have been here since September and this is the most interesting job I’ve done,” said SrA. Mervin Santa Maria, a squadron electrician. The wing will return the land formerly used by the vehicle maintainers to the Afghan army once the new facility is ready. (Kandahar report by SrA. Kayla Newman)