Skip to content
Collaborative Small Diameter Bombs (CSDBs) are launched from the wing of an F-16 fighter from the Air Force Test Center’s 96th Test Wing at Eglin Air Force Base, Fla. Four of the bombs were dropped during the second flight demonstration of the Air Force Golden Horde Vanguard on Feb. 19, 2021. USAF courtesy photo.
Expand Photo 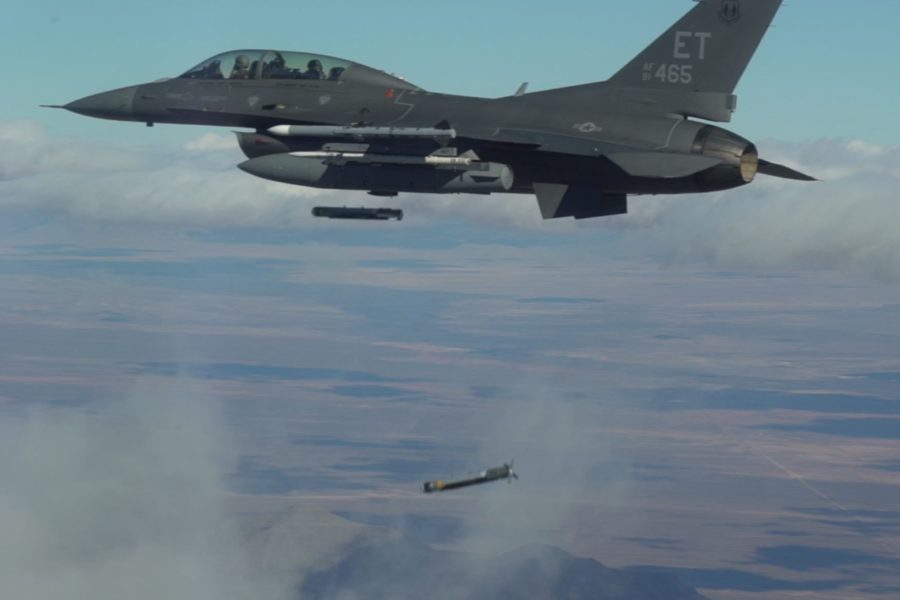 The Feb. 19 event featured four Small Diameter Bombs equipped with systems that let them work as a team, two more than the first test tried out.

They “established communications with each other, identified a pop-up target, and followed the predetermined rules of engagement. They then proceeded to successfully evaluate and assign themselves to multiple targets, striking them in a time-synchronized manner,” the Air Force said in a release. It did not discuss what targets were involved in the event.

Steven Stockbridge, the Golden Horde team’s principal researcher, said the team resolved a software problem discovered during the first test that failed to tell the bombs to move in tandem.

A third test with the Collaborative Small Diameter Bombs is scheduled for later this spring. Earlier plans to try out a collaborative version of the Miniature Air-Launched Decoy, as well as a test with both MALD and SDB, were scrapped.

But a new phase in the cutting-edge program is coming.

“The Golden Horde program is now pivoting from inventory weapon demonstrations to developing and delivering a multi-tier digital weapon ecosystem: a live, virtual, constructive testing and demonstration capability known as the Colosseum,” the Air Force said. “The Colosseum will be a fully integrated simulation environment with weapon digital twins, or a real-world weapon and a virtual clone, to more rapidly test, demonstrate, improve, and transition collaborative autonomous networked technologies.”

USAF hopes digital twin technology will help get a final product out to the field faster by cutting down on physical testing time. Which weapons will carry the Golden Horde concept into battle remains to be seen, since the Air Force doesn’t plan to use the CSDB in real-life operations.

Golden Horde is one of three high-profile “vanguard” programs that pull resources and attention from across the Department of the Air Force to move faster than typical research projects. The department requested about $72 million for Golden Horde in fiscal 2021.

“The continued success of the Golden Horde demonstrations strengthens the foundation for integrating this technology into a variety of other weapon systems and helps the U.S. maintain a technological advantage over our adversaries,” Col. Garry A. Haase, head of the AFRL Munitions Directorate, said in the release.