Skip to content
Retired F-15Cs bake in the Arizona sun in 2012, with Spraylat coverings over their canopies, engine inlets, and other openings in case of their potential return to service. The Air Force now wants to expedite the retirement of the remaining F-15C/D fleet by the end of fiscal 2026. Staff photo by John A. Tirpak.
Expand Photo 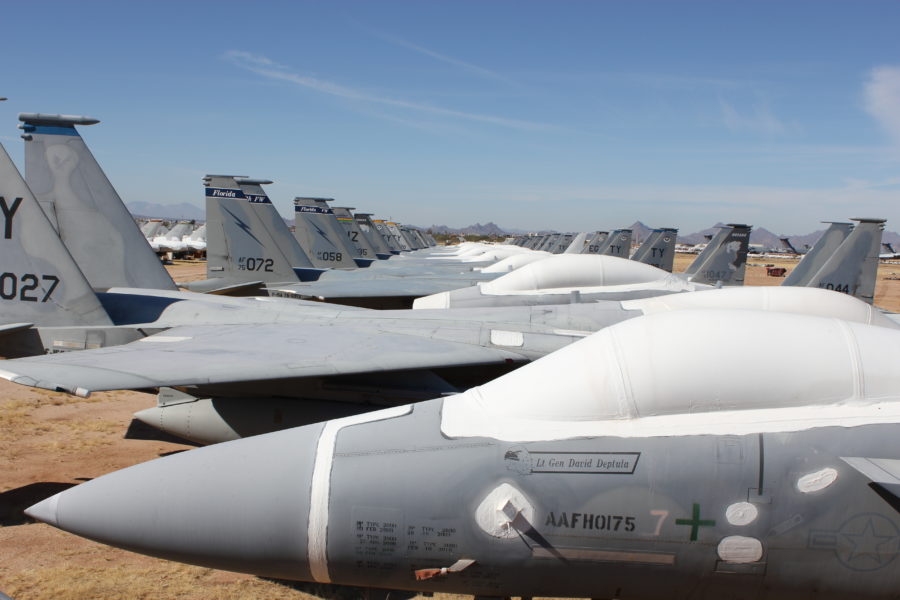 The Air Force will ask Congress to retire 421 legacy aircraft through 2026, replacing them with just 304 new fighters, according to fiscal 2022 budget talking points obtained by Air Force Magazine. The savings derived from operating a smaller fleet will be put toward acquiring new systems such as the Next-Generation Air Dominance fighter later this decade, and a new Multi-Role fighter, called MR-X, in the 2030s.

“The information outlined in the talking points regarding future Air Force fighter force structure is pre-decisional,” said Brig. Gen. Patrick Ryder, an Air Force spokesperson. The document was not labeled as such, however. He declined further comment about potential future budget or resourcing decisions.

The 421 aircraft described in the talking points include a total phase-out of the aged F-15C/D fleet, numbering about 234 aircraft, by the end of fiscal 2026. The F-16 fleet would be reduced by 124 aircraft, mostly from what are called the “pre-block,” or oldest models, leaving a force of 812, also by the end of 2026. The A-10 attack plane would be reduced from 281 total aircraft to 218, for a reduction of 63 tails, but on a more aggressive timeline ending in fiscal 2023.

Over the future-years defense plan ending in fiscal ’26, the Air Force would also bring on 84 new F-15EX and 220 F-35A fighters, resulting in a net reduction of 117 jets over the five-year period. The downsizing would be the largest since the “CAF Redux,” or Combat Air Forces Reduction of the early 2010s, in which the USAF trimmed its fleet by about 250 airplanes.

Air Force leaders have been pushing for several years to be allowed to retire legacy systems in order to pay for new ones that will be more relevant to the future fight, particularly in the Indo-Pacific theater. Service officials in recent days have said they plan to start operating and sustainment costs are “skyrocketing,” and increasing at double the rate of inflation, due to the age of the aircraft. He said 44 percent of the USAF’s fleet is operating beyond its planned service life. The F-16 was initially expected to serve until only about 2005.

The F-22 fleet of about 180 aircraft would remain intact through the FYDP, receiving continuing funds for sensor upgrades and to remain fully viable until it begins transitioning out of the force in 2030. According to the talking points, though, the F-22 “cannot be made competitive against the threat two decades from today.”

The NGAD “family of systems” represents “our ability to fight and win in the highly contested environment in the future,” the document says. The new methodology of developing the NGAD “at a pace future threats cannot match” will allow the Air Force to maintain its advantage.

Even so, however, the Air Force seems to have accepted that broad control of the air in a high-end conflict is no longer achievable. It is aiming, rather, for “temporary windows of superiority” in “highly-contested threat environments,” with “complementary capabilities” for the Joint force and U.S. allies. To achieve this, the USAF needs “full-spectrum survivability, high speed, advanced weapons, and extended ranges.”

To perform the “global strike” mission, the USAF adds to those characteristics “sufficient payload” and resilience achieved through “the use of human-machine teaming and a mix of manned and unmanned systems.”

The F-16 and A-10 fleets would also continue to receive funding for structural modifications and capability enhancements to keep them relevant until they fully retire.

The plan reflects the results of “extensive gaming and analysis using the most difficult problem (China) and the most difficult scenario (Taiwan) at the most difficult time (2035),” according to the document. “It is clear that the Air Force must change the future fighter force structure mix by changing investment priorities to provide the capability, capacity, and affordability required to meet a peer threat,” they said.

Chief of Staff Gen. Charles Q. Brown Jr. said May 12 the service must neck down from seven fighter types to “four plus-one,” the “one” being the A-10, in order to reduce the costs of maintaining so many logistics trains.

The A-10 is “very effective in current conflicts, but it is not viable in the long term,” according to the talking points. “Its lack of survivability in the evolving global threat environment and its singular capability set renders it ineffective in the needed role of affordable capacity.” The A-10 cannot perform the defensive counter air, suppression of enemy air defense, or homeland defense missions, the documents said. The service has tried to retire the A-10, unsuccessfully, several times, thwarted by enthusiasts who say it is an unmatched close air support machine.

However, the Air Force plans to prosecute the CAS mission in a different way, Lt. Gen. S. Clinton Hinote, deputy chief of staff for strategy, integration, and requirements, told Air Force Magazine on May 13. Hinote did not describe the new CAS concept but suggested it would involve unmanned aircraft.

Beyond the FYDP, and potentially into the 2030s, the Air Force expects about 600 “post block” F-16s—C/D models from Block 40 on—to remain in the force with with some upgrades, useful in both permissive and some competitive environments. The transition to the MR-X is expected “in the mid-30s.” This new airplane will be a “clean sheet” design, created by digital methods, and the “decision point” to launch the program is now expected to be “six to eight years away,” according to the document. The MR-X “must be able to affordably perform missions short of high-end warfare.” The F-35 could potentially fill this role, but only if its operating costs could be “brought significantly lower.”

The F-15E/X is described in the papers as “an outsized weapons truck,” useful for carrying standoff weapons in a contested theater or performing air superiority in less-contested airspace. Interestingly, while the Air Force has mentioned that the F-15EX could launch the hypersonic, air-to-surface AGM-183A Air-launched Rapid Response Weapon, or ARRW, the talking points say it can also carry an “outsize … air-to-air” weapon, as well. Presumably, this is a long-range weapon meant to counter China’s long-range PL-15 air-to-air missile, but the documents don’t say whether the weapon referenced is the AIM-260, a classified developmental air-to-air missile revealed two years ago.

Brown told a defense symposium this week that his tactical aircraft study, announced in February, is not meant to be a product delivered to Congress, but is an internal assessment of the right future fighter force mix, which will inform the fiscal 2022 budget request but would be implemented in the fiscal ’23 budget and Program Objective Memoranda.

The White House is expected to release its full budget May 27. The Biden administration released a “skinny” budget last month, which calls for $753 billion for national security programs, including $715 billion for the Department of Defense.