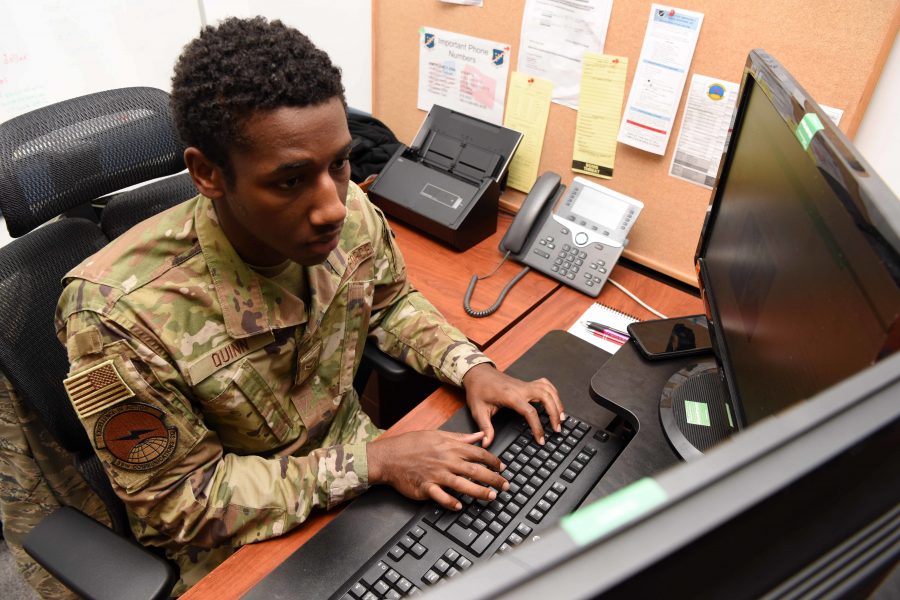 About one-third of Air Force employees may remain largely out of the office even after the coronavirus pandemic subsides, Vice Chief of Staff Gen. Stephen W. “Seve” Wilson said Sept. 16.

The Air Force scrambled earlier this year to set its employees up with remote access to the service’s computer networks and collaboration tools like Microsoft Teams as offices across the country cleared out. For an organization with IT infrastructure years behind the private sector and many homes, the pandemic was an opportunity to catch up and pursue more flexible, unconventional work policies.

Not all service members can work from home because of classified information that can only be accessed in secure rooms, or other technical issues. Many employees feel more productive in an office setting and want to regain the in-person camaraderie lost during the pandemic. But people would have more options to move between home and the office as needed.

“There’ll be a portion of our workforce that never comes back to working as we knew it in the past. I don’t know what that number is—is it 30 percent of our workforce?” Wilson said at AFA’s virtual Air, Space & Cyber Conference. “They may show up to work in a work environment once a day, once a week type of thing, but … because we’ve got everything connected, because we’ve got this workforce that can now work from wherever they are, whenever they want, it’s changed the paradigm on how we’re going to do work.”

“I would see us not going back to some of the models, right?” he said during a Sept. 16 panel on Air Force talent management that was also held as part of vASC. “Not just telework in the location where you live, but imagine us now being able to hire somebody in Arizona who works in the Pentagon, and then never leaving Arizona—maybe occasionally coming TDY to the Pentagon, but staying in their home—for certain staff jobs, our military members, not PCSing because they’re able to effectively telework.”

Lauren Knausenberger, the Air Force’s deputy chief information officer, noted that when the pandemic began spreading in early 2020, the service had only 20,000 remote computer connections for a 750,000-person workforce. It grew the number of people it could connect at once with the help of the Defense Information Systems Agency. Service officials indicated their remote option, known as virtual private networks (VPN), is sufficient for teleworking in the long-term.

As the Air Force has adapted to the idea that you can accomplish work without being at an office in person, Knausenberger added the service must now give people the same quality of technology in an office that they’re used to at home. The Air Force has neglected information technology infrastructure for years, but is shifting to contract out IT services from commercial companies and pursue options like easily accessible cloud storage.

“We can work from all over the globe. We have adopted best-in-class tools. Really, we are able to equip our Airmen to work wherever they are, which has been incredible,” she said. “The good news and the bad news is that we have raised the bar. Our Airmen love working at home, their devices all work, they can manage them, they’ve got lightning-fast Internet. So it really becomes a responsibility for us to maintain the capabilities that they have seen.”

She added that cyber forces and friendly hackers are trying to keep Air Force employees safe on their personal laptops and cell phones, and to see where the service can improve. USAF has control over its own networks, but not the Internet connection employees use for remote work.

“Our cybersecurity professionals are looking at, how does that change the threat surface?” she said. “We need to think a lot more about what is the right volume of secret devices, for instance? We definitely don’t want to spend too much time on personal devices without them being managed in some way.”

The Air Force has to strike the right balance: secure enough to prevent intruders in its networks, but not so much that it stifles productivity.

“If I am doing unclassified work, … I don’t care if our adversaries know that I’m meeting someone for lunch and that it was a lovely lunch conversation,” Knausenberger said. “I do care if they know about our plans for an upcoming mission.”

Service officials added that some Airmen are seizing the opportunity to think outside the box and use technology to improve their everyday work. Wilson noted Goodfellow Air Force Base, Texas, has cut the time it takes to train Airmen in intelligence career fields by one-third, through a mix of in-person and online learning.

In another instance, the 2nd Space Launch Squadron at Vandenberg Air Force Base, Calif., came up with a software app to track data related to COVID-19, instead of using Microsoft Excel spreadsheets.

“Perimeter 9 gives medics and commanders instantaneous and simultaneous awareness of any member of their team impacted by COVID,” 30th Medical Group Commander Col. Raymond Clydesdale said in a May press release. “Perimeter 9 is superior and more secure than any existing platform, and it has the potential to contribute to COVID-19 response and overall medical patient care at a much greater scale.”

“They developed a small software application, deployed it in our continuous integration, continuous deployment pipeline … got that out, and now it’s being implemented across the force by all of our squadrons within our new space deltas,” Crider said. “It’s that kind of innovation that COVID has helped us unleash, and continue to move forward on.”

Editor’s note: This story has been updated to correct Lauren Knausenberger’s title. She is the Air Force’s deputy chief information officer.