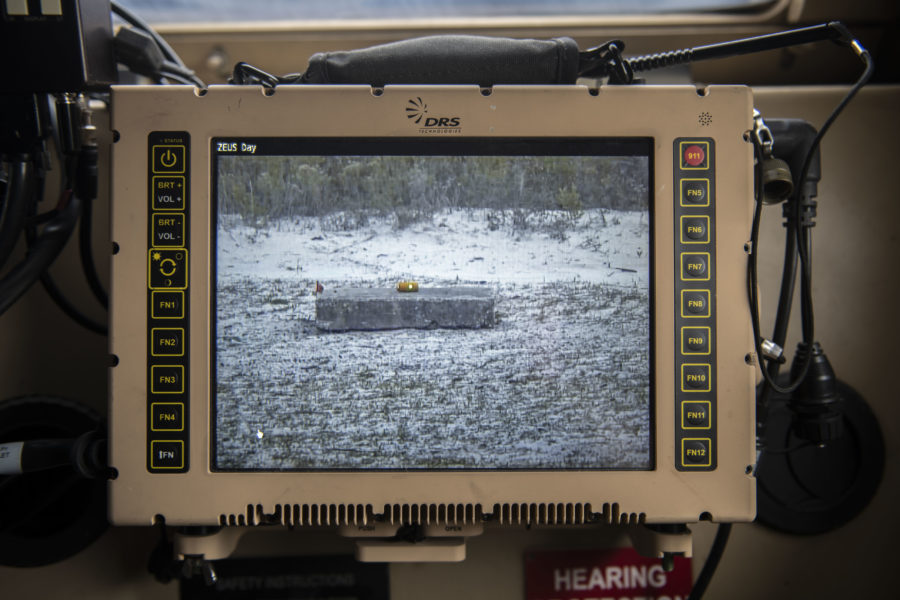 The Air Force will begin fielding reconditioned armored vehicles this fall that are equipped with lasers to detonate unexploded ordnance on airfields following a $40 million development program. If the 13 planned bomb disposal vehicles are a success, the Air Force could order another 21 of them, the service’s Life Cycle Management Center said.

The Recovery of Airbase Denied By Ordnance vehicle, or RADBO, is based on a “Cougar” Mine Resistant Ambush Protected vehicle (MRAP) with four crew stations. The 18-ton vehicle has a robotic arm, with which it can investigate runway craters for unexploded ordnance, and a three-kilowatt Zeus III laser that can detonate “heavily cased” unexploded bombs from as far as 300 meters away. Lighter-cased munitions could be destroyed from even farther away “depending on atmospheric conditions,” an LCMC spokesperson said. The laser heats the casing to “initiate” the explosive fill.

The vehicle is not intended to defuse ordnance, the spokesperson explained.

“Disposal by detonation is often the safest and preferred procedure” for explosive ordnance disposal (EOD) Airmen, he said. After an airfield attack, time will be of the essence in getting it back up and running, so ensuring the field is safe for repairs as quickly as possible is the top priority, he added. The RADBO would be used when the “the area can withstand a high-order detonation.” Research is being done by the Air Force Civil Engineering Center on techniques that could “increase the probability of a low-order detonation over a high-order,” but that effort is still in its early stages, he said.

The RADBO is considered an air superiority asset because “maintainers can’t take care of the aircraft and the aircraft can’t get off the runway” with unexploded bombs on the field, RADBO program manager Tony Miranda said.

EOD technicians will use the vehicles to blow up unexploded bombs “from a standoff range, so we can get back to the business of flying airplanes,” Miranda said. The program is run under the Agile Combat Support Directorate’s support equipment and vehicles division.

The RADBO will be able to quickly assess the airfield after an attack, find unexploded ordnance, and “neutralize” it, according to Al Bello, Mobility and Vehicles Branch chief.

“Once that’s done, heavy equipment can come in and safely repair the damage, to get the airfield back up and running to generate sorties,” he said. The first stage is to create a Minimum Airfield Operations Surface (MAOS), so aircraft can start flying again. After that’s done—and while aircraft begin using the field—the rest of the base would be cleared and repaired “in a prioritized order to get airmen back in the fight,” the spokesman explained.

The RADBO is a new asset that doesn’t replace any existing system; it is “the first of its kind in the Air Force,” the LCMC spokesperson said. Current procedures require an EOD technician in a bomb-resistant suit to place a charge on unexploded ordnance or to attempt to defuse it, a procedure that is “time- and manpower-consuming” as well as highly dangerous, he said.

“Depending on the amount of unexploded ordnance encountered, this can take days or even weeks,” he noted. The RADBO is meant to “prosecute explosive threats in rapid succession, from a safe distance, and from a blast- and fragmentation-protected platform.”

The Air Force is evaluating the laser against an assortment of ordnance, but Miranda asserted it is “quick and absolutely effective.”

The robotic arm—or “interrogator” arm—can move bombs or investigate craters where unexploded ordnance may not be visible from a distance. Although two people can operate the vehicle, it has four stations: for a driver/commander, an arm operator, a laser operator, and an additional technician. The fourth person would potentially control Rapid Mass Mechanical Clearance systems “built to physically plow smaller” unexploded ordnance from the field “without having to engage each one individually.”

The RADBO cannot be operated remotely, but USAF may develop such a capability in the future, the spokesperson said.

The Air Force has been exploring how to rapidly disperse small groups of combat aircraft, supported by Airmen with multiple specialties, using a minimum of transport aircraft, to a wide variety of locations in a war; an effort called agile combat employment. But the RADBO is not meant to be an ACE platform, the spokesperson said.

The “primary mission” for the vehicle is to defend “established airfields,” he said. However, the Air Force EOD community has developed “light and mobile equipment sets to support ACE with small, 2-3 person EOD elements” to be part of an expeditionary force. Joint EOD science and technology programs are also “developing more portable directed energy systems that could also facilitate the ACE concept of operations.”

The vehicle was developed under a $40 million contract to Parsons Government Services in 2020. The contract calls for two prototypes/training vehicles and 13 operational vehicles. The Cougar platforms, which were “divested by sister services,” are already in the inventory of the Air Force, which reconditioned them, and Parsons will install the laser on them. The Cougar was chosen for the RADBO because its armor “mitigates the risk of injury.” A fully-manned MRAP might be the EOD Rapid Explosive Hazard Mitigation (REHM) command-and-control vehicle of the future, the spokesperson said.

The locations where the RADBO will be deployed are still being determined.