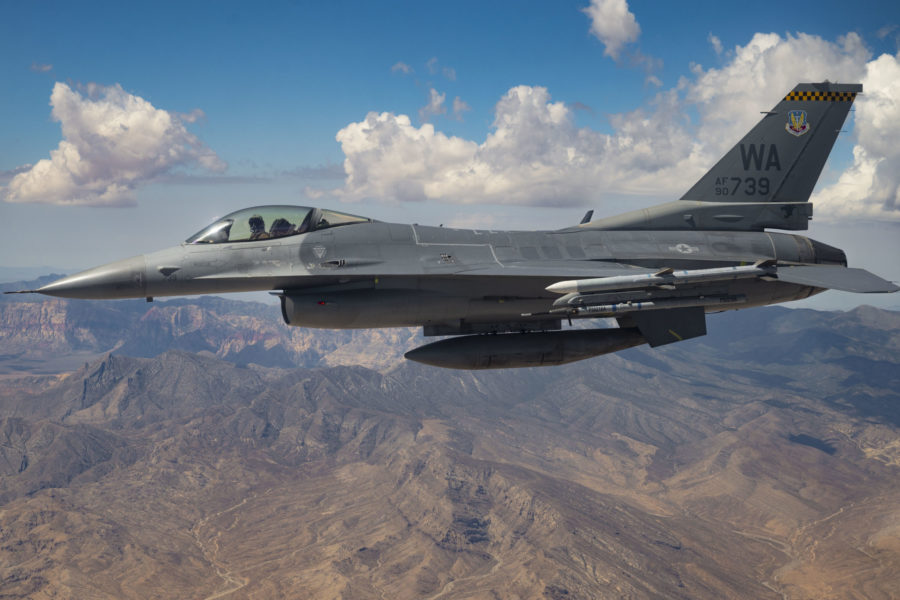 Aircraft simulators must evolve to meet the adversary threat, leaders from the 53rd Wing told Air Force Magazine. Once mainly used for initial qualification training, the Air Force is moving toward a paradigm of simulator training known as the “common synthetic environment” that will create non-proprietary, interchangeable training devices and environments for aircrews to train, conduct mission rehearsals, and even test new weapons and other capabilities in a virtual environment.

The development is in the initial stages, with a building constructed to house the Virtual Test and Training Center (VTTC) at the Air Force Warfare Center at Nellis Air Force Base, Nev., and approximately $20 million dollars slated per year through fiscal 2028 for software and new simulators.

The VTTC is expected to be fully operational by 2027, but partnerships with Air Force Material Command and Naval Air Systems Command could advance the timeline, a 53rd Wing public affairs spokesperson said.

Originally slated to begin in fiscal 2024, the Air Force is counting on fiscal 2023 funding to connect the newest platforms to the Joint Simulation Environment, or JSE, a government-owned, non-proprietary modeling and simulation environment.

“What we’re seeing now is a drastic shift in the paradigm of the importance of the synthetic environment, equal to if not in some areas eclipsing the importance of lifelike missions when it comes to mission rehearsal, and some training aspects and test aspects,” he added in a video interview with Air Force Magazine.

The Nellis campus is building out a capability for fourth-generation-plus fighter aircraft from the F-15EX forward to bombers such as the B-21 and intelligence, surveillance, and reconnaissance aircraft such as the Air Force’s newly selected E-7 Wedgetail.

“The synthetic environment has been a huge afterthought,” Clementi said. “When you just talk generically about a common synthetic training environment, we are talking about one environment that is built with the ability to host multiple different devices.”

The VTTC campus at Nellis, under the command of 31st Combat Training Squadron leader Lt. Col. J. Chris Duncan, hosts a variety of simulators that allow pilots and crew to “fly” together in a non-distributed environment, meaning each simulator is located no more than a few thousand feet from each other. The VTTC is also exploring technologies for blending synthetic scenarios with live flying at the Nevada Test and Training Range.

The “vision” is for all of the Air Force’s latest-generation aircraft to have a device that connects to the VTTC campus, running the same software, so the aircraft can train, rehearse missions, and test together, Clementi said.

The urgency of the shift to the synthetic environment has three roots: adversary observation, current range limits, and the need to integrate multiple platforms.

Adversary observation means everything from weapons testing to new tactics, techniques, and procedures (TTPs) can now be seen, particularly by Chinese and Russian satellites passing overhead.

“When you talk about adversary exploitation, I think the unclassified number out there for collection capability is in the minutes that we have a window available to execute without being observed from some sort of collection entity,” said Clementi.

Furthermore, the commander said the Air Force no longer has the technological capability to replicate the sophistication of the adversary threat.

“The [U.S.] aircraft are so sophisticated that they that they know that what is being replicated is not the actual thing,” Clementi said, describing how the F-35 can detect when artificial targets are trying to replicate Russian SA-15 and SA-20 surface-to-air missiles.

The same is true for air targets.

“When you talk a Chinese J-20, we can do our best now with what the 64th Aggressors are standing up, using fifth-gen fighters, using F-35s, to kind of replicate, but it’s still not the same thing,” he said.

Current ranges are also too limited for modern air warfare.

“The standoff that’s required exceeds the capability of the ranges, of the airspace that we have,” Clementi said, describing rehearsals with multiple aircraft and standoff distances in hundreds of miles. “And then, being able to put all of those assets together in one piece of sky is almost impossible.”

Finally, proprietary simulators, each created by the manufacturer of the platform itself, make it expensive and time-consuming to link together multiple platforms and test new threat paradigms.

“Every platform, every device had a different environment,” Clementi explained, giving the example of Lockheed Martin’s F-35 and its simulator.

“So, if you just take one example about an air-to-air threat model, it is built by Lockheed for Lockheed, for that one device,” he said. “Over time, we saw the need to start linking devices together so that they could fly in a synthetic environment.”

Those devices had been connected by the Distributed Mission Operations Center (DMOC), formerly a proprietary system operated by Lockheed Martin. The DMOC hosts the Air Force’s hub for remote combat training exercises, testing, and experimentation. But Clementi said modeling, security, and latency limitations exist for simulators operating at Nellis and Eglin.

“In the last five years, we’ve realized that the requirement has now eclipsed the ability of executing,” Clementi said. “When you pair all of those together, you’re almost left with no choice but to start executing some of this high-end, advanced test, training, and tactics development in the synthetic environment.”

The Air Force Warfare Center has already built some facilities with a desire to incorporate partner and allied nations. Strategic messaging has also begun to get the word out and generate widespread understanding and buy-in.

Clementi said Air Combat Command is even considering re-designating the 29th Training Systems Squadron as a test and evaluation squadron to acknowledge its new role.

This story was updated at 11:51 a.m. Aug. 25 to clarify the role of the Distributed Mission Operations Center (DMOC).