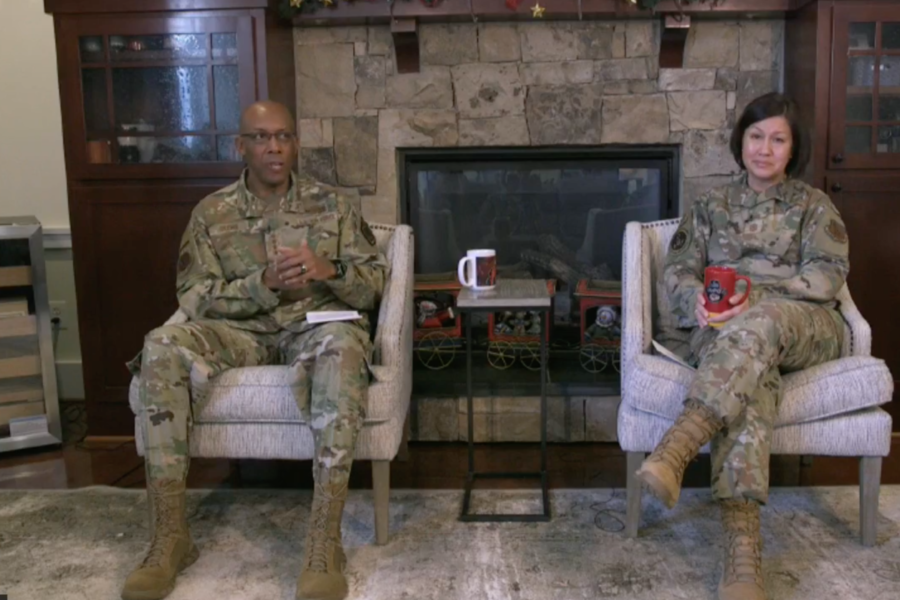 The Air Force is set to announce a new team in the coming weeks to study barriers to resilience and mental health, Chief Master Sgt. of the Air Force JoAnne S. Bass said Jan. 6.

Speaking during a “Coffee Talk” event streamed on Facebook, Bass said the new group, called the Fortify the Force Initiative Team, or FIT, will fall under the Air Force’s Barrier Analysis Working Group, or BAWG. FIT will be officially unveiled early this year, “probably within the next few weeks,” Bass added.

The BAWG has previously established seven subgroups to study specific barriers facing minorities in the service and to propose efforts to address those barriers. This new group will focus more broadly on the issue of resilience, Bass said, and will have advocates in herself and Chief Master Sgt. of the Space Force Roger A. Towberman.

“That’s going to be a team of Airmen and Guardians, for Airmen and Guardians, to help identify lines of effort that we can do to get after resiliency, mental wellness, mental health—all of those things,” Bass said. “And the goodness of those BAWGs and the goodness of FIT that we’ll have is myself [and] Chief Toberman will champion that and be able to provide a direct [contact] to our senior leaders so that we can actually kind of cut down the bureaucracy—to be able to get some solutions that you all see that we need to do when it comes to resiliency.”

“The key part here, and this is one of the areas that the CMSAF and I are working on, is we want to actually help provide our leaders with the tools to engage before a member has to go to see mental health,” Brown said. “At the same time, we want to make sure that we have mental health capability available to all our Airmen, and [we are] really looking and paying attention to those high-stress career fields.”

The Air Force’s issues with mental health have become increasingly prominent in the past few years. In July 2019, then-Chief of Staff Gen. David L. Goldfein ordered a one-day stand-down to address the rate of suicide in the ranks. The number of suicides among Active-duty and Reserve Air Force and Air National Guard members jumped from 80 in 2018 to 109 in 2019, then stayed there in 2020, according to Pentagon data.

And recently, Air Force Secretary Frank Kendall indicated that he believes the issue of mental health is tied to other issues such as racial disparities and interpersonal violence, which the department has studied in the past year or so.

“I think every one of these is in some way an institutional failure,” Kendall said during a Facebook town hall in November. “It’s a leadership job to make sure people are educated about the issues they face. It’s a leadership job to make sure that people understand that when they do have a problem, that they can get help and that it’s OK to do that.”

The establishment of the new BAWG subgroup isn’t the only news that’s set to arrive in early 2022, Brown and Bass said during their talk.

Most immediately, Brown said, will be a memo “in the coming days” addressing the ways Airmen express themselves online.

“We often talk about dignity and respect,” Brown said. “We’re doing so much more on the internet, through cyber means, through social media. The things that we would say in person are the same things we’ve got to pay attention to … online. And I had a friend in college who said, ‘Never throw a brick and hide your hand,’ and I’ve always believed that—in the fact that … if you can’t say it to my face, don’t put it online. And it’s something that we’ve got to pay attention to as we go forward.”

“It is going to be a framework that keeps us grounded on: How do we develop the Airmen that we need in the future with a whole bunch of objectives?” Bass said. “We put ourselves on a two-year time period on that, but every one of us has an opportunity to be part of that development on how we’re developing the force of the future.”

And finally, Brown said that by the end of January, he hoped to issue modifications to the four action orders he released in December 2020 to support his “Accelerate Change or Lose” strategic approach. Brown offered only a few details on how the action orders would change, saying one order focused on bureaucracy needing to be adjusted to “actually flatten communication [and] … to increase collaboration.”

The Veterans Crisis Hotline is available 24 hours a day, seven days a week, for veterans, service members, and their family members and friends who need help. Call 800-273-8255 and press 1, text 838255, or visit www.veteranscrisisline.net.