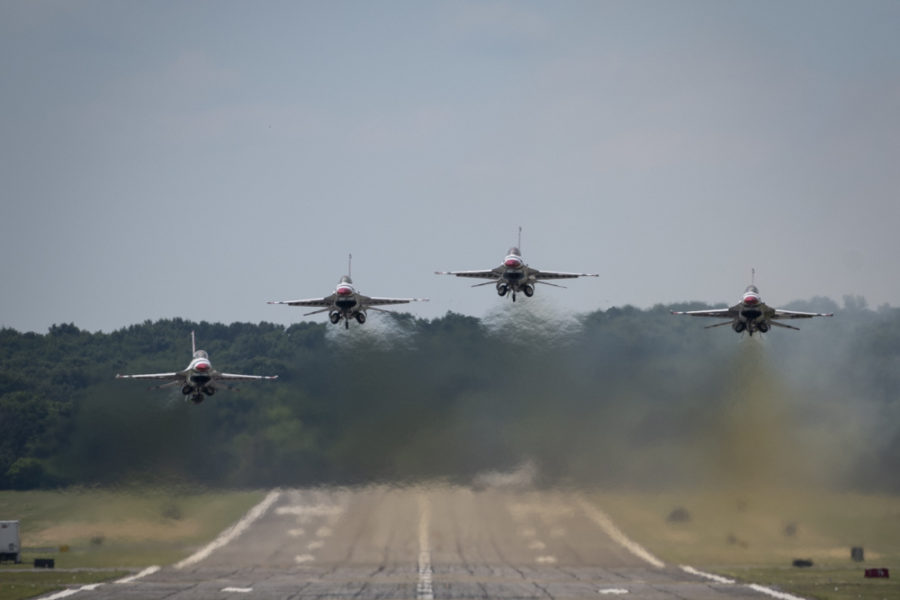 The Air Force Thunderbirds’ 2021 airshow season will include the first overhauled performance in about 38 years. It also marks the beginning of a culture change for a team that in recent years has seen some of its lowest points.

Col. John Caldwell, Thunderbirds commander and No. 1 pilot, said during a June 15 Air Force Association Air and Space Warfighters in Action event, that his team is one of the highest visibility squadrons in the Air Force, performing about 240 days a year before millions of people.

The team’s performance is designed to demonstrate the strength of the Air Force and its aircraft as well as skills of combat employment. Maneuvers highlight the element of surprise and the power of the F-16, and they show the crowd that “these are the good guys. You know, that feeling is derived from: We want people to appreciate what your men and women are doing out in the field, out in combat every single day,” Caldwell said.

The mission is important for the service, and the team has to be at its best to spread that message to the crowds.

“When they see the Thunderbirds perform, we’re able to take combat capability and reduce it down into something that’s consumable by your average civilian to where they can truly appreciate the technology that’s represented in these aircraft, and the skill of the pilots, and the skill of the ground crew, and the maintainers through the ground show, and that generates confidence and support,” he said.

When Caldwell took command in 2018, the Thunderbirds were coming out of a couple of tumultuous years that included a fatal crash, along with multiple other serious mishaps and the firing of a commander. With a new commander and new team, Caldwell led the team through a 2019 season looking to “stabilize the system.” The team wasn’t going to push the envelope and instead focused on flying safely and getting through the season by executing the basics.

“There wasn’t a whole lot of appetite at the time to really dig into the history of the team, to dig into some of the structural things that we got into later, to changing the demo,” he said. “We just wanted to get through the season. We wanted to perform well with what we [knew] worked in the past.”

By the end of 2019, Caldwell said there were parts of the squadron that needed work and improvement, so he called in 15 former Thunderbirds for their brutal and honest input on the team.

“Everything was on the table, which requires you to assume a little bit of humility there when you’re inviting 15 folks who previously have done your job to come here and critique you on how you’re doing,” Caldwell said. “But we didn’t have a forum like that in the past—we didn’t have the ability, in a productive way, where these folks could provide critiques.”

The former commanders came to the team’s home at Nellis Air Force Base, Nev., to watch the “combat acceptance show” when the head of Air Combat Command watches the team’s performance and approves them to start the show season.

The 15 commanders watched Caldwell fly, sat in the pre-flight briefing and debrief, and ultimately gave some strong feedback.

“It was pretty eye-opening, some of the critiques we received and some of the information that we got from that group,” he said. “It was enough to where we realized there was some serious work that we needed to execute, to get this team back to where we wanted it to be in precision formation flying and precision air show demonstration.”

Following this, the Thunderbirds “committed ourselves to that idea that we were going to work on trying to recapture some of … these versions of the team we had in the past” and push to get better.

And then the COVID-19 pandemic hit.

The national lockdowns and spreading impact of the pandemic canceled the Thunderbirds’ show season just as they were gearing up to start. As the weeks passed, the Thunderbirds eventually reached out to the Navy’s Blue Angels, and the two teams developed the “America Strong” flyovers as a way to salute first responders and medical workers across the country during the pandemic.

The two teams flew over cities across the country and worked more closely together than they had before. This collaboration gave the Thunderbirds more insight to the Blue Angels’ operations, and that became a catalyst for the Air Force team to look at how they are flying and for ways to change.

The team spent the last half of 2020 flying “basic air shows,” and when the season ended, they decided to take a deep look at their performance and overall operations to find ways to reinvent and improve.

The result was 59 separate initiatives for the team to address, ranging from individual maneuvers in the sky, to the equipment they use, to cameras and tracking devices to “police” their flying and find ways to improve.

Caldwell said the team’s performance over the years had become a “hodgepodge” of individual tweaks, none of which came together to give it an overall theme.

“We wanted to turn this from a series of athletic maneuvers like the Harlem Globetrotters to more of a performance like the Cirque du Soleil, where it has themes. It has coherency. It has themes that make sense and that we can tie music and narration into,” he said.

The team wanted to focus on the “customer experience.” They reached out to the board of former commanders, as well as entertainment professionals with experience at places such as Disney and Universal Studios, to provide feedback on music and narration.

This year’s show includes eight types of new maneuvers, a changed sequence, new music and narration, changes to the ground show, and the shutdown. The team rewrote its operations manual and installed things like GoPros in the cockpits, GPS trackers to show the exact lines pilots flew, and a new digital video recorder system. These changes “eliminated all the subjectiveness from it. It is cold, hard data that we can look at. And it’s very unemotional: You either did it right or did it wrong, and we have the data here to prove it. And that’s what really made the team, I think, more effective and better.”

Within the F-16s, the pilots got new lap belts because the stock belt on the aircraft wasn’t sufficient for the amount of inverted flying the team does, and its pilots were getting injured.

The F-16s themselves received the newest tech suite, the Operational Flight Program M7.2+ upgrade, which provided new capabilities but also a challenge. The suite includes the Automatic Ground Collision Avoidance System, which takes over controls if it senses the F-16 is about to crash. But, the system doesn’t work well with aerobatic displays.

When Caldwell flew with the system for the first time, it tried to recover the jet during his first maneuver, so it had to be changed.

Because of the mishaps in recent years, the team was down by three aircraft. The Thunderbirds usually have a fleet of 13 and travel with eight, but was only able to take seven jets. To remedy that, the team was able to get F-16s from the nearby U.S. Air Force Weapons School and one from the South Carolina Air National Guard. For the first time, in-house maintainers converted these aircraft for the team, including the famous red-white-and-blue paint. By doing this in-house, the team was able to shorten the timeline of receiving an operational jet “on the order of months,” Caldwell said.

The team now is almost back to full strength, with one jet still in a hangar undergoing conversion, though it will be ready “in the next couple of months,” he said.

This year’s season includes at least 28 shows, with more to be added to the schedule.