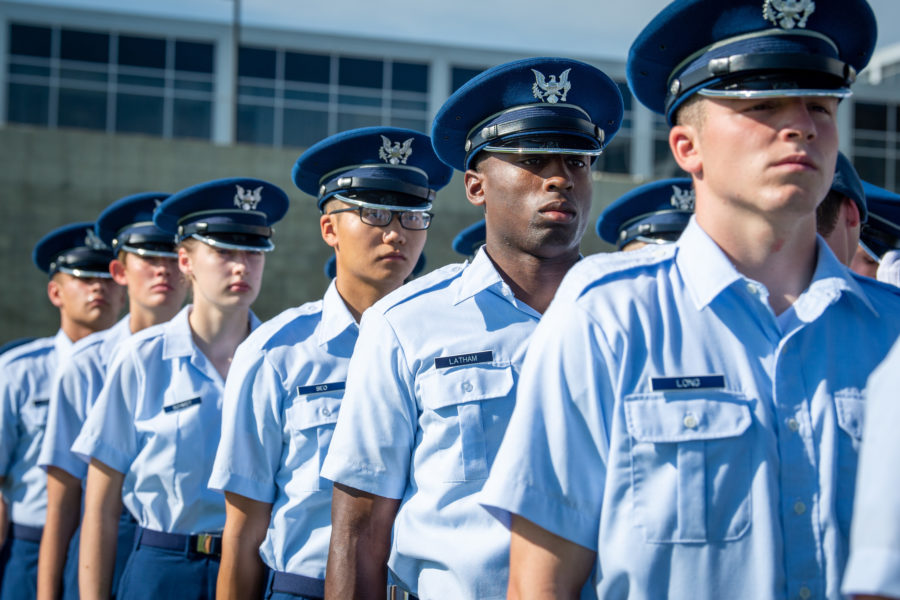 The Department of the Air Force offered up new “aspirational” goals for diversity in its officer applicant pool in August. Now Secretary Frank Kendall has given the department’s commissioning sources until Sept. 30 to develop initiatives to try to meet those goals.

“It is imperative that the composition of our military services better reflect our nation’s highly talented, diverse, and eligible population,” Kendall wrote in a memo dated Aug. 9, adding that the new percentages “will not be used in any manner that undermines our merit-based processes.”

The applicant pool demographic goals, updated for the first time 2014, also include figures that incorporate gender, race, and ethnicity—undersecretary Gina Ortiz Jones has pushed for more consideration of “intersectionality.”

For example, the new goals project 13 percent of the officer applicant pool to be Black—8.5 percent men, 4.5 percent women.

“Our applicant pool goals are intentional, because our investments and outreach to top talent must be intentional,” Jones said in a statement.

Across the board, the new demographic goals represent a notable shift in ambition for the Air Force and Space Force. The previous goals, established in 2014 and broken down across racial categories, were:

The new department-wide goals are set at:

According to data provided to Air Force Magazine, two of the main sources of officer commissions, the U.S. Air Force Academy and Air Force ROTC, mostly met the 2014 goals in their enrollment numbers from 2015 to 2021, the most recent year for which data is available.

However, the percentages were substantially short of the new goals for the most part, though less so for smaller racial groups such as American Indian or Alaska Native; and Native Hawaiian or Pacific Islander.

In particular, USAFA’s enrollment numbers didn’t meet the new diversity goals for Black, Hispanic or Latino, or female officers in any of the six years covered, while Air Force ROTC’s numbers fell short every year for Black, Asian, and female officers.

Meanwhile, the current Air Force and Space Force officer corps is even more predominantly White and male. While the new officer applicant goals may not directly result in more diversity in the Active-duty officer corps, the most recent data show the breakdown is currently:

The breakdown of goals across race/ethnicity and gender is available here.

Kendall’s directive to develop diversity and inclusion outreach initiatives is aimed at the department’s main commissioning sources—the U.S. Air Force Academy, Air Force ROTC, Officer Training School, and the Space Force’s direct commissioning program. After developing initiatives, those sources will have to report annually on them.

DAF’s push for more diversity in its officer corps comes as the department responds to a series of independent reviews in recent years that found disparities in recruitment, retention, and promotions among racial and ethnic minorities, as well as women, in the Air Force and Space Force. In particular, the operations field is the least diverse specialty code, and within that career field, the pilot specialty is the least diverse of them all.

At the same time, the department is also dealing with a difficult recruiting environment that has caused leadership to expand its efforts to entice potential Airmen. In particular, the Air Force Academy saw a steep decline in applications this past year of around 28 percent, which officials have blamed on a lack of in-person recruiting caused by the COVID-19 pandemic.

This story was updated Sept. 1 to directly compare the new officer applicant pool goals to the 2014 goals and data from two commissioning sources.