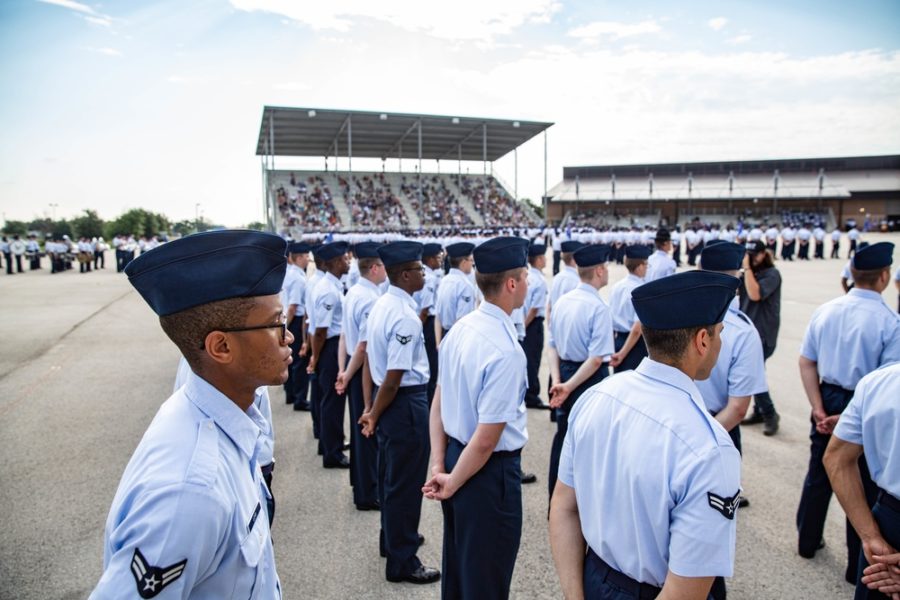 Typically, men and women are issued two long-sleeved and two short-sleeved blue shirts at BMT. Men also receive three pairs of trousers, and women get two pairs of slacks. Since November, though, amid a fabric shortage, some graduates have received only one long-sleeved shirt, one short-sleeved shirt, and one pair of either trousers or slacks, an Air Force spokesperson confirmed.

BMT graduates will be granted a cash allowance in their paychecks so that they can eventually buy a full uniform set from the Army and Air Force Exchange Service.

But it’s not just BMT graduates who could be affected in the coming months by the uniform shortage. The Department of the Air Force said in a statement that the current fabric shortage “will also affect the supply of service dress items” for the entire department.

The Defense Logistics Agency said in a statement that Burlington Industries, the sole U.S. supplier of approved worsted and poly-wool dress fabric used in all military services’ dress uniforms, is experiencing shortages caused by “labor challenges and increased material cost.”

As a result, the DLA is expecting “a greater impact on the production and availability of dress uniforms starting in the third quarter of fiscal year 2022”—around April 2022.

“DLA Troop Support’s Clothing and Textiles supply chain is in close communication with Burlington to match fabric production with stock levels to best maintain the flow of fabric and mitigate uniform backorders where possible,” the agency said in a statement.

The Clothing and Textiles supply chain agency is also “in the process of resoliciting Burlington’s contracts,” the statement said.

The Air Force isn’t the first service to experience uniform shortages of late. During the early days of the COVID-19 pandemic, the Coast Guard faced a shortage of operational dress uniforms resulting from outbreaks of the virus at manufacturing hubs in Puerto Rico. Supply shortages for both the USCG’s ‘Bravo’ jacket and dress pants lingered into mid-2021.

Massive supply chain issues have hit across the globe, spurred by a variety of factors including the pandemic and affecting everything from computer chips to Christmas lights.

As the calendar flips to 2022, though, uniform changes are already front of mind for some in the Department of the Air Force, as the Space Force looks to start wear-testing its new dress uniform, a prototype of which was unveiled in September.