Skip to content
The Air Force has asked industry for information on a potential replacement to the MQ-9 Reaper, like the one shown here on the flight line at Creech Air Force Base, Nev., Dec. 17, 2019. Air Force photo by Senior Airman Haley Stevens.
Expand Photo 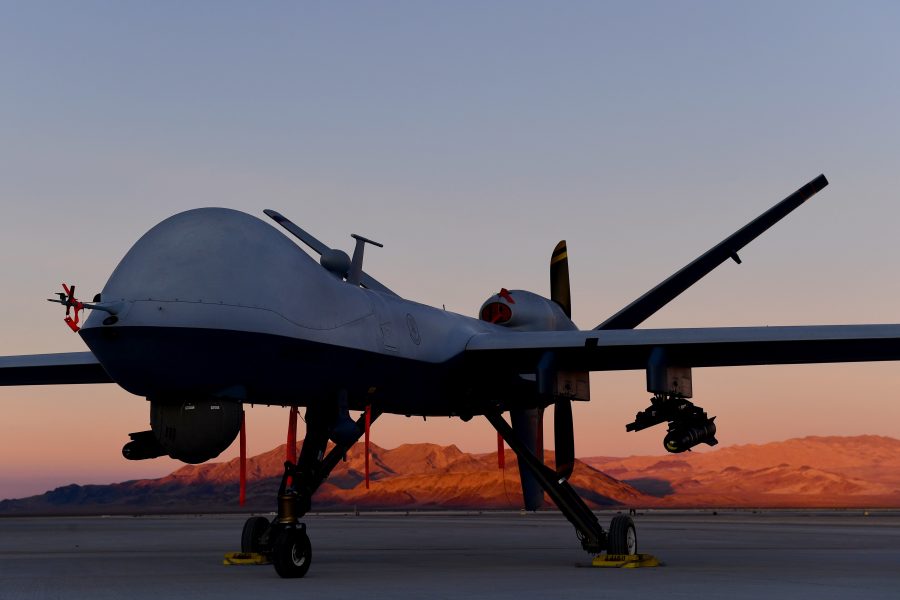 The Air Force is looking for a stealthy, autonomous, and possibly expendable replacement for the MQ-9 Reaper hunter-killer remotely piloted aircraft, with initial operational capability circa late 2031, according to a request for information published June 3.

The RFI, published by Air Force Material Command’s Life Cycle Management Center, suggests the on-again/off-again “MQ-X” is finally going ahead. It notes that planning for the MQ-9’s “end of service life” is already underway, and cites “a need to identify a solution … is imperative.” The AFLCMC wants responses back from interested companies by mid-July.

Air Force leaders have been talking about an MQ-9 replacement for at least a decade, looking ahead to the time when the service would likely no longer be able to operate in a permissive, anti-insurgency environment, requiring a medium altitude intelligence, surveillance, and reconnaissance capability that could survive against heavy adversary air defenses. The MQ-9’s only survivability features are its relatively slow and quiet operation as it flies at medium altitude. The aircraft is easily detectable on radar.

According to the solicitation, the Air Force wants an aircraft that is able to survive in a future threat environment—meaning stealthy—and able to employ “to maximum extent possible” the advanced technologies “that support the principles of the 2018 National Defense Strategy.” These, it said, include autonomy, artificial intelligence, machine learning, digital engineering, open mission systems, and attritable technology “among others.” Initial deliveries would start in the third quarter of fiscal 2030.

The Air Force said it’s doing this market research to help it build an acquisition strategy, which hasn’t been created yet. However, it expects to hold “multiple competitions,” to include ones for the airframe itself, automated sensors and data exploitation, and ground control “stations/systems/suites,” all employing open architecture/open mission systems formats.

The MQ-9 mission set “provides a unique capability of combined ISR and Strike attributes in a single platform fulfilling the highest demand of all Air Force assets through vast capacity,” the RFI noted, suggesting a potentially large production run.

It’s not clear if the new aircraft would supplement, replace, or evolve from aircraft like the XQ-58 “Valkyrie,” attritable aircraft built by Kratos Defense. The Air Force Research Laboratory is running the Low Cost Attritable Aircraft Technology (LCAAT) program.

In pursuit of both requirements, USAF said its priorities are delivering relevant capability “efficiently, [in a] timely [fashion] and at a reduced life cycle cost.”

If there’s sufficient interest and capability from small businesses, USAF may make the program a Small Business Set-Aside. That will be determined by whether it can find two or more small businesses able to do at least 50 percent of the work.

General Atomics, maker of both the Reaper and the MQ-1 Predator from which it evolved, offered a stealthier version of the Reaper—a jet-powered version called the Predator C “Avenger”—to the Air Force in the late 2000s, and the service bought one to try out in Afghanistan. But service officials later said that the sole aircraft—reportedly designated the YQ-11—didn’t offer a substantial increase in capability over the Reaper and is now used for prototyping and experimentation work. The Air Force shut down its previous “MQ-X” effort—at least in the unclassified world—in 2012. At its own expense, General Atomics tested a larger-winged version of the Avenger in the mid-2010s.

The new program has three “focus areas,” and the Air Force doesn’t require respondents to respond in all three areas.

First, it’s interested in air vehicles either already in development, or that already exist and are “scalable” to a military solution.

Second, the service is looking for “innovative development and business practices,” to include modular, open-system architecture principles. Respondents can “leverage technologies from other programs as deemed necessary.” The Air Force said “interested parties are encouraged to consider/assume the Air Force Research Laboratory (AFRL) Skyborg program as the primary UAS autonomous baseline solution.”

Toward this end, it wants to maximize competition while “widening the commercial knowledge base,” seeking a “best of breed” solution from “multiple entities.” It will also consider “commercialized ISR services” to the Defense Department.