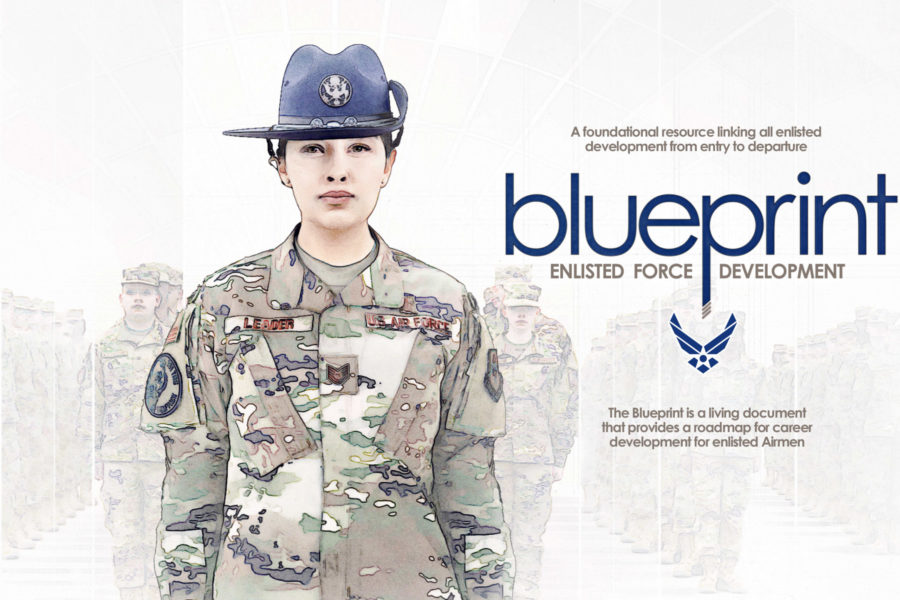 Basic information on the Air Force’s history and structure, details on core values and skills, links to information on professional development and other resources, all gathered into one place—that’s the idea behind “The Blueprint,” released by the Air Force on April 21 to help guide its enlisted force development.

A 32-page “living” document that will be updated regularly with new information and links, “The Blueprint” is intended to be a resource and reference for enlisted Airmen throughout their careers, presenting essential information on everything from Air Force Specialty Codes to different programs Airmen can tap into when leaving the service.

“When I grew up, we had more of a pyramid, if you will. And if you do all of these things in your career, ultimately, here’s how you become a senior noncommissioned officer or whatever,” Bass told Air Force Magazine in a January interview. “And I just don’t see things in that light anymore. We see them as a blueprint, and there’s many paths, many ways within an Airman’s career.”

To that end, three pages of “The Blueprint” detail different development opportunities for junior enlisted Airmen, noncommissioned officers, and senior NCOs. These include the Community College of the Air Force, Airman Leadership School, Special Duty, sister service enlisted professional military education, and even just a permanent change of station. At each point, the document also highlights the transition opportunities and resources available for those leaving the service.

“The Blueprint” also gathers links to the Air Force’s various resources for managing personal and professional development, from myFSS and myEval to programs for military families and spouses.

In addition to resources, the Blueprint also gathers the fundamental information Airmen will need in their careers, from the core competencies and Airman Leadership Qualities to explanations of how the broader structure of the Defense Department and Air Staff work.

“What I envision in my mind is a kind of a cradle-to-grave blueprint on an Airman’s career, from the time they start their career all the way through the end and, kind of, even off into after they separate and/or retire. … It’s just a roadmap for them to be involved in their own deliberate development of a career and also shares with them what they can expect,” Bass told Air Force Magazine.

“The Blueprint” is one of several foundational documents for the Air Force that are set to either be released or updated in the coming months. As outlined in the Enlisted Force Development Action Plan, the service also plans to update its “Blue Book,” which defines and breaks down the Air Force core values, and the “Brown Book,” which lays out the Enlisted Force Structure and establishes the standards, roles, and responsibilities for enlisted Airmen.

In the summer of 2022, the service will also release its first ever “Purple Book,” detailing “how do we develop the joint leaders that we need, that are able to talk joint, train joint, and to some degree, understand and integrate more and have the synergies that we need with our brothers and sisters from the other services,” Bass said.