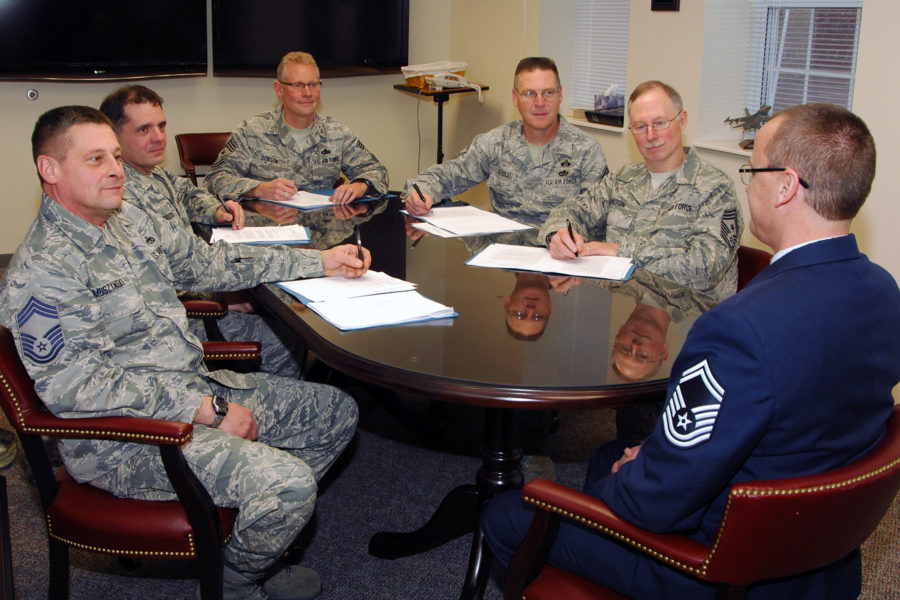 The Department of the Air Force recently released its selection board schedule for 2022, establishing separate schedules for the Air Force and Space Force and moving up certain boards to earlier in the year.

The Air Force Personnel Center also announced the formation of a new developmental category within the Line of the Air Force for the selection boards.

“The October field grade officer board will be Space Force’s second consolidated officer board as a separate service,” said Col. Scott Arcuri, U.S. Air Force Selection Board Secretariat chief, in a release.

The Space Force is shifting to selection boards for all noncommissioned officers. In 2021, it replaced tests with boards for certain enlisted Guardians in E-6, E-7, and E-8 grades, though it only included those in the space systems operations field, according to Air Force Times. This upcoming year will mark the first time all candidates from E-5 through E-9 will be included, a Space Force spokesperson confirmed to Air Force Magazine.

On the Air Force side, the chaplain, colonel, and some lieutenant colonel boards will meet several months earlier than they did in 2021, “moving the colonels’ promotion boards earlier in the year to better align with the colonel assignment process,” Arcuri said.

Specifically, the chaplain boards will meet in late March and early April, some three months earlier than a year ago. The same accelerated timeline will also apply for all Line of the Air Force colonel boards.

Candidates for colonel in the medical, dental, nurse, and biomedical sciences corps will meet with boards in June, also three months ahead of last year.

This will happen, Arcuri said, to “address shortages in some LAF-C [Line of the Air Force-Combat Support] career fields.”

In March, the Air Force’s newest board will meet to consider candidates for lieutenant colonel in the cross functional operations developmental category. The new category is for “Foreign Area Officers (FAOs) who now have their own Air Force Specialty Code,” Arcuri said in the release. Candidates for colonel in the new category will compete in the same late March-early April timeframe as other LAF colonel candidates.