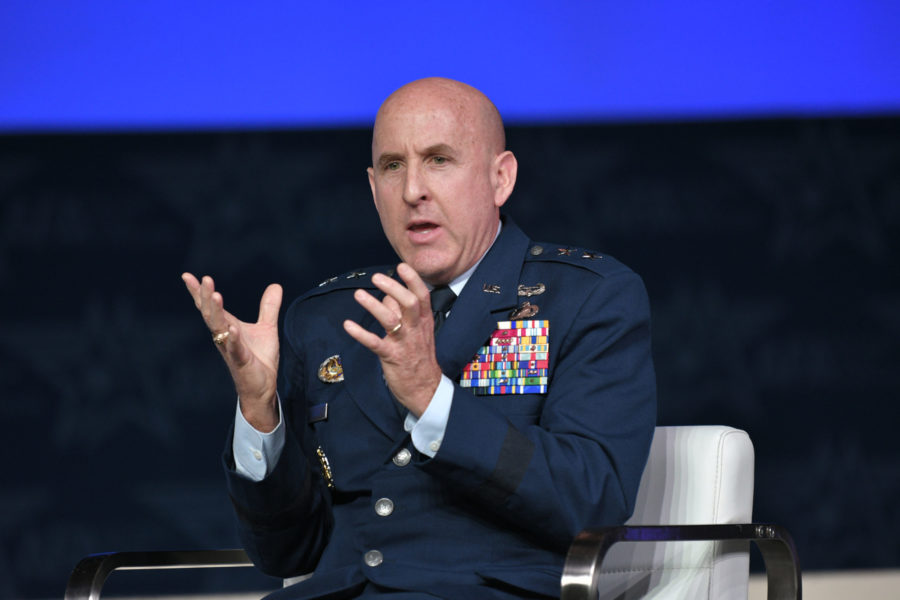 A year ago, Air Force leaders were celebrating an unusually successful year in recruiting. For the first time in more than half a decade, the Air Force Recruiting Service was on pace to hit all of its goals—Active Duty, Reserve, Guard, and Space Force.

Twelve months later, and the picture could hardly look more different. AFRS gritted out the ending to fiscal 2022, barely reaching its goal for the Active-duty Air Force and missing goals for the Reserve and Guard by some 1,500 to 2,000 recruits each.

And while commander Maj. Gen. Edward W. Thomas Jr. said during AFA’s Air, Space & Cyber Conference that 2022 was a “perfect storm” of recruiting challenges and the toughest environment the Air Force has faced since 1999, he also acknowledged that 2023 won’t be easy, either, as his team is set to start the year with less of a cushion than it is used to.

“I would say that we’re doing a dead-stick landing as we come into the end of fiscal year ‘22,” Thomas said. “So dead-stick landing as we hit the 30th of September, and we’re going to need to turn around on the first of October and do an afterburner takeoff. We’re going to be starting fiscal year ‘23 behind about 5,000 recruits on the Active-duty side alone. We usually start with what we call a bank or starting pool of about 25 to 27 percent. That bank’s down to about 10 percent.”

That “bank” consists of recruits who are simply waiting to ship out.

In seeking to explain how the recruiting environment took such a dramatic turn for the worse, Thomas pointed to both long-term trends and short-term issues that challenged the Air Force in 2022.

On the long-term side, continued declines in both eligibility and propensity to serve among America’s youth, as well as declining familiarity with the military, “has been a math problem coming at us for a while,” Thomas said.

There’s also a growing trend of discontent with the military among more politically conservative communities who feel the Pentagon has prioritized so-called “woke” priorities of diversity and inclusion over readiness and lethality.

The discontent is real, Thomas said, citing surveys showing military parents have become less likely to recommend service to their children. But the concerns are not accurate, he insisted.

“I would say there is a significant misunderstanding of what’s going on inside of the military today. While there are some things that have changed, the basic principles, life, concept, values of the military is what it has been for decades,” Thomas said. “So how do we counter that? We go back to values—who we are, what we believe in, the value of the individual, the value of service, how we treat people, dignity and respect.

While those long-term challenges will persist, Thomas expressed guarded optimism that some factors will be more temporary.

AFRS has returned to schools and public events, but its workforce also needs to adjust, Thomas said. Seventy percent of recruiters started after the pandemic began, meaning they just don’t have much experience with in-person recruiting.

Another issue has been the labor market, as unemployment stays low and competition for workers remains fierce.

“The battle for talent has been intense. And it hasn’t just been within DOD—it’s been Amazon; it has been Google; it’s been Starbucks. It’s been American enterprises looking for good employees, good recruits,” Thomas said.

Such a dynamic is particularly bad for the Guard and Reserve, Thomas said.

“It affects them in that non-prior service, those that have never served in the military are a little less likely to come to the Guard and Reserve because they’ve got a lot of job opportunities knocking at their door,” Thomas said.

“Now at the same time, the Reserve depends on being able to gain 70 percent of their force being already trained, experienced military members that are leaving the Active service. Well, those numbers leaving the Active service, they also have a tremendous amount of job opportunities knocking on their door, so they’re less likely to convert and stay blue, if you will.”

“For those that are looking at a part-time opportunity, if the vaccination is going to be an issue for them, it’s going to likely play larger in their calculus than somebody considering a full-time career option in the Active forces,” Thomas said.

While AFRS does not have data that directly shows the impact of the vaccine mandate, Thomas said, it has looked at states with lower vaccination rates and seen a corresponding dip in recruiting numbers.

Up until recently, it was far from certain that AFRS would meet its Active-duty goal in 2022, Thomas said. And 2023 is already shaping up to be difficult as well.

In looking to combat that, Thomas has a few tools he can use.

One is initial enlistment bonuses. The Air Force boosted its IEBs twice in 2022, expanding them to different career fields.

The service is also looking to expand the pool of eligible recruits. Pentagon surveys have shown that just 23 percent of the target population is currently eligible due to issues such as medical conditions, drug use, out-of-regulation tattoos, and law violations.

While reiterating that he had no intention of compromising on warfighting standards, Thomas outlined several ways that eligibility can be expanded.

“A year or two ago, frankly, we could afford to lose people around the margins because of finger tattoos, because of certain medical conditions that we weren’t willing to take risk on. We are in an environment today that we have to be exceptionally smart in how we assess the risk and how we set our accession criteria,” Thomas said.

The Air Force and Space Force’s tattoo policies have changed recently, giving Thomas and other recruiting leaders the authority to approve waivers for smaller hand tattoos. Thomas claimed he has personally approved hundreds of tattoos after reviewing them via pictures on his smartphone, and all told, roughly 1,000 have been OK’d.

For medical conditions, the decision to approve waivers is more data-driven.