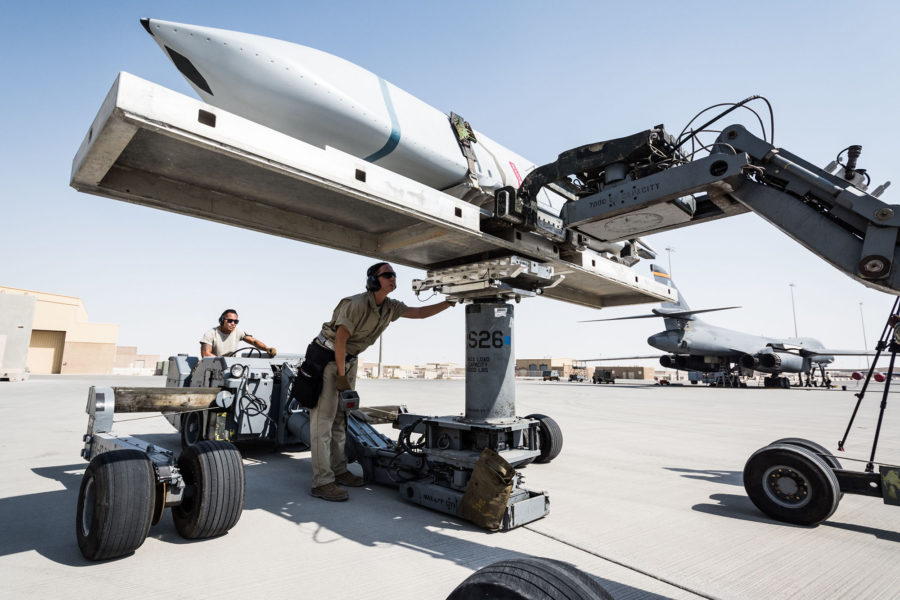 As Air Force Ramps Up JASSM, Work Begins on its Replacement

“Preliminary” discussions and “early development work” about how to pursue the next long-range conventional stealth missile are underway, even as the Air Force ramps up production of the AGM-158 Joint Air-to-Surface Standoff Missile, or JASSM, said Brig. Gen. Heath A. Collins, head of the service’s armament directorate.

“We’re in initial conversations on what happens after JASSM,” Collins told reporters Aug. 4, calling the discussions “very preliminary” and giving no timetable as to when the Air Force would want a JASSM successor. It will be looked at “in the years to come,” he said. Lockheed Martin, which makes JASSM, recently built a new production facility in Troy, Ala., to increase capacity. It could open for work as soon as October. Collins said the new facility will “increase our production rate.”

In the meantime, the Air Force is “still in the midst of getting as many JASSMs as we can into our inventory, to meet our objective,” Collins said during a media roundtable during the online Air Force Life Cycle Industry Days.

The Air Force only has a “small ramp-up” planned for the Long-Range Anti-Ship Missile (LRASM) variant of JASSM, Collins said. He declined to say why the service is only buying a small handful of LRASMs, saying only that requirements are determined by the Air Staff. Not as many Long-Range Anti-Ship Missiles will be needed as Joint Air-to-Surface Standoff Missiles because “of the target set we’re going after.”

The JASSM-ER (extended range) is the preferred version, and the Air Force is “transitioning” to the B2 version of the missile while doing “initial … tech insertion” to create a “D” version of the missile, Collins reported, saying the directorate will “continue to evolve” the weapon. The D model provides “more flexibility.”

A Lockheed Martin spokesperson said the Air Force executed a modification to its 2018 JASSM contract Aug. 3, “giving the program the go-ahead for several missile enhancements and capability upgrades that will be cut-in in upcoming production lots.” These will be “formally recognized” with the designation AGM-158B-2, she said. Future variants are being planned, but LMCO left it to the Air Force to discuss their designations. Neither the Air Force nor Lockheed Martin could immediately comment on what new capabilities the updates provide.

Collins said the JASSM also is the preferred munition for Air Force Research Laboratory’s “palletized munition” program, in which an airlift aircraft could launch salvos of missiles, but he could not elaborate on it. “We are supporting [it] from a weapons expertise perspective,” he said.

Collins could not give any new details about the AIM-260 Joint Advanced Tactical Missile (JATM), revealed at the same conference two years ago, when then-program executive officer Maj. Gen. Anthony W. Genatempo, said it would be ready for tests from the F-22 in 2022. Collins said the Air Force is “pushing forward and executing” the program, but he is restricted from further comment due to its sensitivity. The missile is set to replace the AIM-120 Advanced Medium-Range Air-to-Air Missile sometime this decade and is purported to have a range to compete with China’s new long-range air-to-air missiles such as the PL-15.

Genatempo forecast production lots of JATMs in the hundreds of units and said AMRAAM production will start tailing off as the JATM ramps up. The Air Force’s 2022 budget request included a reduction in AMRAAM production from previous years.

The Air Force is finalizing its acquisition strategy on the Stand-in Attack Weapon (SiAW) and will “move out on that later this year,” Collins said. Although the program started out as a variant of the Northrop Grumman AGM-88G Advanced Anti-Radiation Guided Missile, Collins said the plan will be to open the program up to “a competitive contract.” The AGM-88G is the Navy’s successor to the High-speed Anti-Radiation Missile (HARM).

Although SiAW will be a stand-in weapon, Collins explained that the “extended range” means it can go farther than the initial Advanced Anti-Radiation Guided Missile, but that he could not discuss ranges. “ER on AARGM means something different than ER on JASSM,” he offered.

Collins said the Air Force is aware of various papers published in recent years suggesting the Air Force could get more punch out of its direct-attack munitions by putting range-extending motors on them, noting the service is moving in that direction.

“We have a program [called]… GPAW, the Global Precision Attack Weapon, which is in its early phases, looking at concepts of what the future direct attack weapon looks like,” he said. “And in that study space, there are certainly a number of options [that include] … putting a motor on existing weapons.” The armaments directorate is also looking at the Army/Navy/Marine Corps Joint Air-to-Ground Missile-Fighter, which is a project to replace the Hellfire and Maverick missiles.