Skip to content
Ravi Chaudhary, nominee to be assistant secretary of the Air Force for energy, installations and environment, speaks during his confirmation hearing before the Senate Armed Services Committee on Feb. 17, 2022. Screenshot
Expand Photo 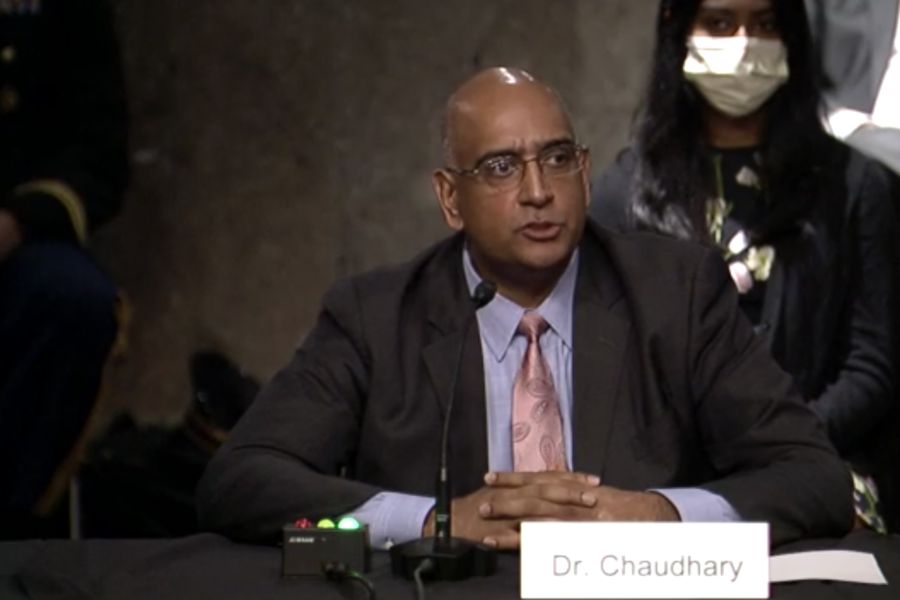 The former Air Force C-17 pilot nominated to oversee the department’s installations came under fire during his confirmation hearing Feb. 17, as multiple senators pressed him over an editorial in which he advocated for the use of artificial intelligence to track extremism in the military.

Ravi Chaudhary, nominated by the Biden administration to serve as assistant secretary of the Air Force for installations, environment, and energy, tried to walk back that argument during the hearing, saying he regretted the article and pledging not to use AI in such a manner if confirmed.

Chaudhary, who also served as a member of the Senior Executive Service with the Federal Aviation Administration, penned the article in question for Foreign Policy News in July 2021, working with Ty Smith, a former Navy SEAL and CEO of CommSafe AI, a company that offers to use AI to “[analyze] workplace communications 24/7, [identify] toxic communication, and [flag] appropriate personnel in your organization before issues escalate.”

Smith and Chaudhary, who was working as an adviser for CommSafe AI at the time, wrote that “the time has come to shift the fulcrum in the battle against violent extremism from reactive to proactive, and take the fight to the extremists by doing what we always do—match superior strategies with advanced technology.”

Fighting extremism in the ranks has been a priority for top Pentagon officials in the Biden administration. In February 2021, Defense Secretary Lloyd J. Austin III ordered a DOD-wide stand down to address the issue, and in December, the department adopted a new set of rules prohibiting service members from actively participating in extremist behavior.

But this push has been met with resistance by many Republican lawmakers, who say the issue isn’t as widespread as some fear and that efforts to address it could run afoul of the First Amendment.

And in Chaudhary’s confirmation hearing, five Republican senators brought up his editorial, pushing him to promise not to use artificial intelligence to track service members’ communications and behavior.

“The intent of the article was to engage in a public discussion on addressing extremism, as well as other areas affecting readiness,” Chaudhary replied. “The article fell short of that, and I regret that.”

“The vast majority of the men and women who serve, serve with honor, integrity, and excellence,” he said. “I also believe that the constitutional rights of our military members who serve should be protected. Period. If confirmed, I’ll follow the lead of [Air Force Secretary Frank Kendall] in addressing extremism.”

Pressed further by Sen. Mike Rounds (R-S.D.) to say that he understood “this committee would never look upon the investigation or the use of AI in the oversight of our men and women in uniform … to be an acceptable thing,” Chaudhary said that was “absolutely correct.”

While many of the questions directed to Chaudhary were focused on the editorial, he was also asked by Sen. Tim Kaine (D-Va.) how he planned to handle the issue of privatized housing for military families, in the wake of Balfour Beatty Communities, one of the largest providers of privatized military housing in the U.S., pleading guilty to defrauding the Air Force, Army, and Navy.

“Our military members and their families deserve to have well-maintained, clean, and excellent housing. Not only that, [but] a system in which their grievances can be addressed, as well as challenges that they’re meeting at the same time,” Chaudhary said. “If confirmed, you have my commitment that I will move out on this issue extremely quickly to ensure that we have the right oversight, management, contracts. Across the board, I’m going to take a top-down look at every aspect of our military privatized housing, because we just absolutely have to get this right.”