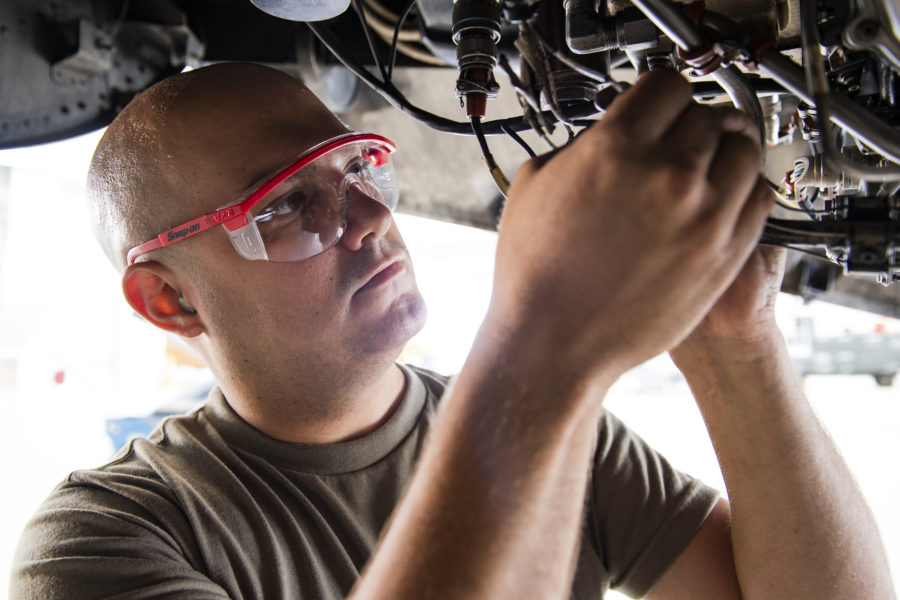 A new uniform set is coming to the Air Force, giving Airmen in aircraft maintenance, industrial, and other labor intensive units the option to wear coveralls, provided their unit commander authorizes it.

The new set will officially be designated the maintenance duty uniform (MDU) and will be included in the updated Air Force Instruction 36-2903—which governs dress and appearance for USAF and Space Force troops. The new uniform is expected to be released in August, according to a June 14 Air Force release.

The sage coveralls will be worn with the coyote brown T-shirt, Operational Camouflage Pattern (OCP) patrol or tactical cap, coyote brown or green socks, and coyote brown boots. It will have a basic configuration of a nametape, service tapes, and rank along with the higher headquarters patch on the left sleeve and a subdued U.S. flag and organizational patch on the right sleeve.

“The MDU idea was presented to the 101st uniform board in November 2020 as a way to help increase readiness and timeliness from the work center to the flight line,” Chief Master Sergeant of the Air Force JoAnne S. Bass said in a statement. “We are hoping this change will instill a sense of culture and inclusivity for our maintainers who work to keep the mission going 24/7.”

The Air Force also announced June 14 that it will immediately authorize the wear of certain tactical OCP caps while it works to complete the acquisition process for the new uniform item. The caps must be made entirely of OCP material or OCP material with a coyote brown mesh back.

The new caps differ from the OCP patrol cap in that they are lighter and fit more closely to the head. Women will be able to pull their bun or ponytail through the back of the hats, but Airmen will still have to have the Velcro or sew-on spice brown name tape centered on the back of the caps. The only thing authorized for wear on the front of the cap are officer ranks.

The new uniform adjustments are the second group of such changes instituted by the Air Force in the past few months. In March, the service announced it was authorizing shorts for maintainers, as well as Duty Identifier Patches, certain sock and eyeglass frame colors, and messenger and lunch bags. The department has also recently adjusted its rules regarding the hairstyles allowed for women to better address differences in hair texture and density.