Skip to content
A 914th Air Refueling Wing KC-135 boom is extended while a 157th ARW KC-46 gets closer for refueling over the Atlantic Ocean, April 28, 2020. The aircrew was conducting an offload of fuel to a KC-46 and continuation training. Air Force photo by Peter Borys.
Expand Photo 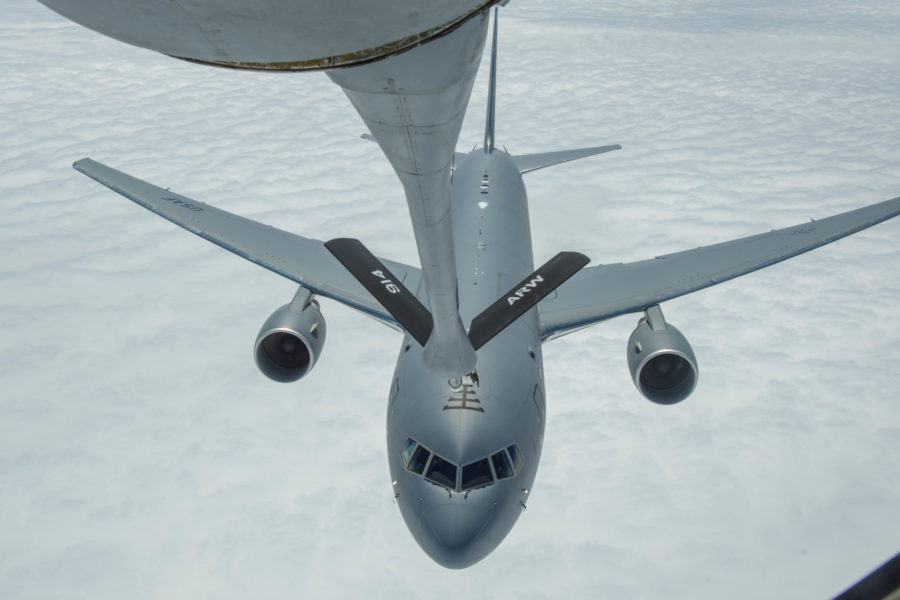 The Air Force has pounded another nail into the coffin of a potential bridge tanker competition with the launch of the Advanced Aerial Refueling Family of Systems (AAR FoS) program. In a request for information by the Air Force Life Cycle Management Center, the service informed the aviation industry that it’s seeking significant improvements to existing tankers while looking to define a far more capable future system. Among the new missions for tankers will be electronic warfare and refueling uncrewed aircraft.

In a June 22 announcement, the AFLCMC called the AAR FoS “an evolutionary approach to add new capability to the current tanker fleet (KC46A/KC-135R/T), while developing the overall requirements for a new tanker aircraft.” This dual-track approach will “most effectively implement solutions that improve tanker fleet operations.”

While some of the “new and mature technologies” sought from industry will be used to upgrade the KC-46 and KCX-135, others “in early stages of development and maturation” will continue to be developed for the still-undefined KC-Z effort, which has been described by transport leaders as a potentially smaller and stealthy aircraft that can escort fighters and bombers into heavily-defended enemy airspace.

“Current and future tankers will be required to effectively command, control, and communicate globally, navigate accurately in degraded environments, and perform at a high operations tempo in contested environments,” the Air Force said.

Among the capabilities tankers will need are:

The latter, known as ACPs, are uncrewed aircraft that will escort future manned combat aircraft, performing missions such as electronic attack and suppression of enemy air defenses, as well as intelligence, surveillance, and reconnaissance, and as flying magazines of extra weapons. The manned aircraft designates the target for the unmanned missileer to shoot at.

The Air Force has several times ginned up a program to equip the B-52 with a theaterwide electronic warfare capability called the B-52 Stand Off Jammer, but the program was axed each time due to budget considerations. Service officials have long said tankers would be well suited to this role because of their proximity to the action.

As these new capabilities are inserted into existing tankers, and as new technologies are developed, the combination will “shape the requirements for future tanker aircraft,” the service asserted.

The minimum requirements for improved tanker capabilities may involve, but are not limited to, “survivability (kinetic and non-kinetic defensive systems); Real-time Situational Awareness; Connectivity/Data; Interoperability” and “autonomous refueling operations as both tanker or receiver to manned and unmanned platforms, in both boom and drogue configurations.”

In pitching new technologies, the Air Force wants respondents to state the technology readiness level of the capabilities being proposed. A TRL states whether a new technology is still at the concept/experimental stage (TRLs 1-2) or practically ready for production (TRL 6-7), or already proven operationally (TRL 10). The service also wants cost estimates and proposed timelines for inserting these technologies, whether they’ve been applied in other programs, and any form/fit/function issues that might arise.

The Air Force wants to hear back from companies interested in offering new capabilities by July 8.

Since the fiscal 2023 budget request was presented to Congress, Air Force Secretary Frank Kendall has downplayed the possibility of a “bridge tanker” competition for the so-called KC-Y, saying that the requirements developed so far would probably be most cost-effectively achieved by an upgraded version of the KC-46A, built by Boeing. Air Force officials have also said privately that if it can avoid doing so, the service would like to avoid adding a new platform, which would require the logistics support of a depot, a spare parts pipeline, and military construction to accommodate a different airplane.

The House last week declined to adopt an amendment to its version of the National Defense Authorization Act requiring the Air Force to compete the next stage of tanker recapitalization, but Alabama representatives promised to revisit the issue next year.

Lockheed Martin has been promoting the LMXT, an Americanized version of the Airbus KC-30A Multi-Role Tanker Transport design that lost to the KC-46, as a contender for the KC-Y requirement. It has also promised to build the aircraft in Alabama if it were selected to build the jet, prompting a wave of condemnations of the KC-46 by Alabama representatives in recent armed services committee hearings.

The KC-46 has a deficiency with regard to its remote viewing system, which allows the boom operator, seated behind the cockpit, to see refueling aircraft in low light and in 3-D. The Air Force and Boeing have reached a cost-sharing agreement on upgrading the RVS to meet new USAF requirements, but the improved system will not be operational for several years.

The Air Force has been certifying the KC-46 to refuel various aircraft in USAF, Navy, Marine Corps, and foreign inventories and has now cleared about 90 percent of all users to take fuel from the aircraft.