Skip to content
Tech. Sgt. Jason Felts, 19th Maintenance Squadron sheet metal production lead, drills a hole in a new 3D printed hydraulic pump bracket at Little Rock Air Force Base, Arkansas, June 4, 2020. The re-creation of the part acted as an opportunity to completely revamp the structure and strength of the part to decrease the amount of repairs that are needed over time. Air Force photo by Airman 1st Class Jayden Ford.
Expand Photo 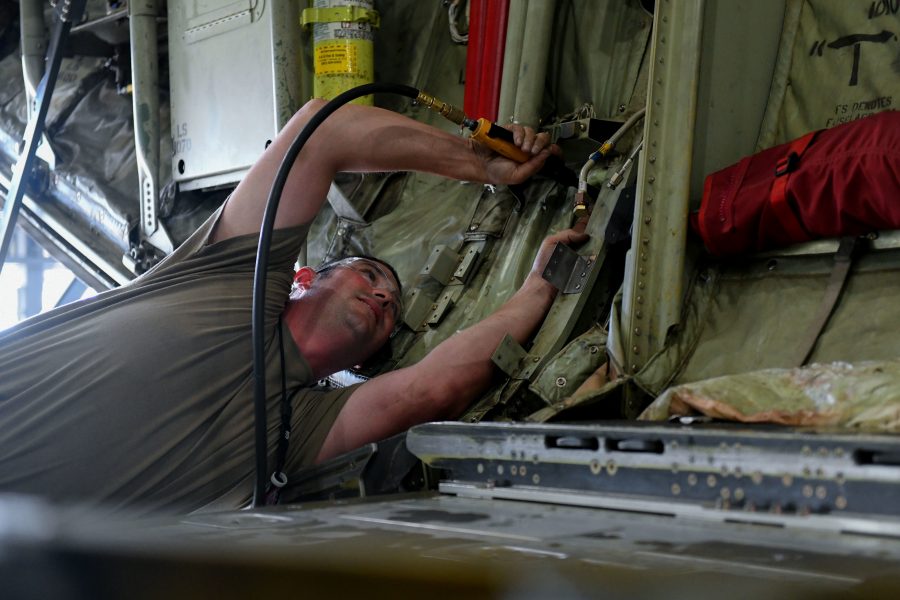 Air Force Goes for the Gold with Advanced Manufacturing Olympics

The Air Force Rapid Sustainment Office and its partners want more than 60 teams to channel the speed and precision of the world’s top athletes as they chase a new standard in airworthy, 3D-printed plane parts.

The “Advanced Manufacturing Olympics,” which are already underway and will end with a online showcase in October, will test the limits of innovative new manufacturing techniques that can lead to faster maintenance turnaround, cheaper upkeep, and more flexible flight operations.

For example, instead of waiting for a company to replace a broken aircraft part with one fresh from the production line, Airmen could simply use a 3D printer to create their own and install it within days. The tricky part is building those components if no blueprint for them exists, ensuring they are safe to fly, and shrinking the lengthy approval process.

“The old saying is, ‘They’re written in blood,’” Air Force Life Cycle Management Center boss Lt. Gen. Robert D. McMurry Jr. said of the established processes. “Because when we didn’t follow those rules, people died. … What we’ve got to figure out is how to get to near-certainty that [parts are] going to work for us the first time, and every time.”

Sixty-four teams from industry, government, and academia are vying for a $1 million pot of prize money spread across five challenges.

According to RSO Chief Technology Officer Lily Arcusa, teams in one event will try to replicate as many parts as possible from a box of components using reverse engineering and modeling. Another set of teams will quickly fabricate flight-ready F-16 fighter jet parts and get them certified for flight. A third challenge looks to prove that teams can produce new building materials that work as well as traditional metals and polymers. The fourth focuses on supply chain challenges, and the fifth aims to accurately build a 3D-printed part from existing design data.

A panel of judges from the military and private sector will vet the results of each test. First-place winners for each challenge will nab $100,000, those in second place will earn $50,000, and the third-place teams will get $40,000.

The challenges will build on the work the Air Force has already done to get 3D printers into Airmen’s hands and explore homegrown maintenance. In August 2019, Travis Air Force Base, Calif., said it was the service’s first field unit to get certified with an industrial 3D printer to create nonstructural aircraft parts.

Earlier this month, the Air Force said it had successfully tested a reverse-engineered, 3D-printed metal part on a B-52 bomber engine for the first time. Moving from initial contract to manufacturing took less than a month.

“Ideas that move from design to flight in less than a couple months is exactly where we want to be as an Air Force,” Arcusa said.

If their ideas succeed, the Air Force could respond faster to combat equipment needs at home and overseas. It would also help backfill parts for aging planes that were made by now-defunct companies.

“It is so important, we absolutely have to invest in it. We have to put significant resources of the department against it. We need to explore how to use it,” McMurry said. “It’s absolutely energized our senior leadership to move forward.”