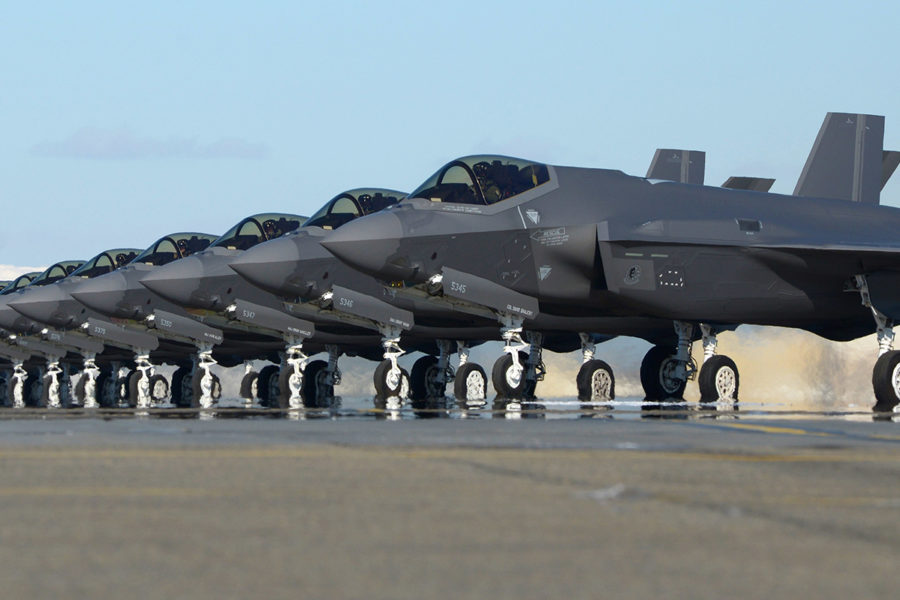 The Air Force grounded its F-35A fighters as it checked for potentially faulty parts in the type’s Martin-Baker ejection seats. The move followed by a day the service’s grounding of nearly half its T-38 supersonic trainers and about a sixth of its T-6A primary trainers for the same issue.

Air Combat Command announced that it was standing down its F-35As, as did U.S. Air Forces in Europe and Air Education and Training Command. Pacific Air Forces was expected to follow suit. The Navy is following a similar inspection protocol on its jets with Martin-Baker seats, including its F-35Bs/Cs, F/A-18s, EA-18s, T-45s, and F-5Ns.

“With a few exceptions, all ACC F-35 aircraft are in a temporary stand-down while more data is analyzed,” an ACC spokeswoman said July 29. “The stand-down of aircraft will continue through the weekend, and a determination to safely resume normal operations is expected to be made early next week, pending analysis of the inspection data.”

ACC said it has known about the potential problem since April, when a routine inspection found a defective cartridge at Hill Air Force Base, Utah.

“An Immediate Time Compliance Technical Directive was issued” to inspect other aircraft, the spokeswoman said, which ordered that all the seats be checked within 90 days. When it was determined that a production line quality failure was to blame, the F-35 Joint Program Office “rescinded the immediate action” TCTD and changed it to a “routine” TCTD, still to be completed within the 90-day period, she said.

The general stand-down was ordered July 29 “to expedite the inspection process,” the spokeswoman said. The command could not say how long it expected the inspections to take, as a count of how many had already been inspected was not immediately available. The Air Force has about 475 F-35s.

A USAF spokesperson said “this is properly called a stand-down” rather than a grounding because the aircraft can resume flying after an inspection shows that they’re safe to operate.

During the Hill inspection in April, a single cartridge-actuated device, or CAD, on an F-35 seat was found to have an insufficient amount of explosive powder, a Martin-Baker spokesman said.

“It was incomplete; it was not finished,” he noted.

Since then, factory records and lots have been checked, and USAF F-35As have subsequently been inspected “out of an abundance of caution.”

The process requires taking a jet out of service for about a day, as the seat must be fully removed from the aircraft to get at the parts, which can then be accessed “in a few seconds,” the spokesman said. Each seat has two CADs, which help propel the seat out of the aircraft if the pilot commands an ejection.

There are ways to determine from a visual inspection whether the CAD is defective, the Martin-Baker spokesman said. If maintainers are still in doubt, they can perform an X-ray to establish that the proper amount of powder is in the cartridge.

Aircraft found not to have faulty cartridges can return to flying immediately. If a cartridge is suspect, a replacement is installed.

“They’ve done about 70 percent of the fleet already,” the Martin-Baker spokesman said of USAF’s F-35s. “Only a very small number” of problematic cartridges have been identified, and “they have plenty to replace them.”

The issue is “F-35-unique,” he said, but “because it has come from the same factory in the same period,” AETC and the Navy are checking their records and their aircraft “to make sure” other aircraft aren’t affected.

The Naval Surface Warfare Center Indian Head Division provides propellant-actuated devices for all the services, and Martin-Baker is “working with Indian Head” to mitigate aircraft downtime, the company spokesman said.

There has been congressional attention to ejection seats in recent months, and consequently, the services are “taking no chances. They are going for zero risk,” he said. Some 85 countries and 95 air forces fly aircraft with Martin-Baker seats, and “everybody is looking” at their airplanes to ensure there are no issues, he added.

The Navy has been X-raying F-35 CADs since July 24 to verify they are good and shipping them to fleet maintenance centers to swap out for any defective parts found, Naval Air Systems Command said.

Air Force officials said training of pilots will be affected by the various groundings, but because of the availability of simulators, the impact is expected to be small, “especially if this is a short-lived thing, which I expect it to be,” according to one. He also said the downtime can be exploited by maintainers to catch up on other inspections and maintenance actions.