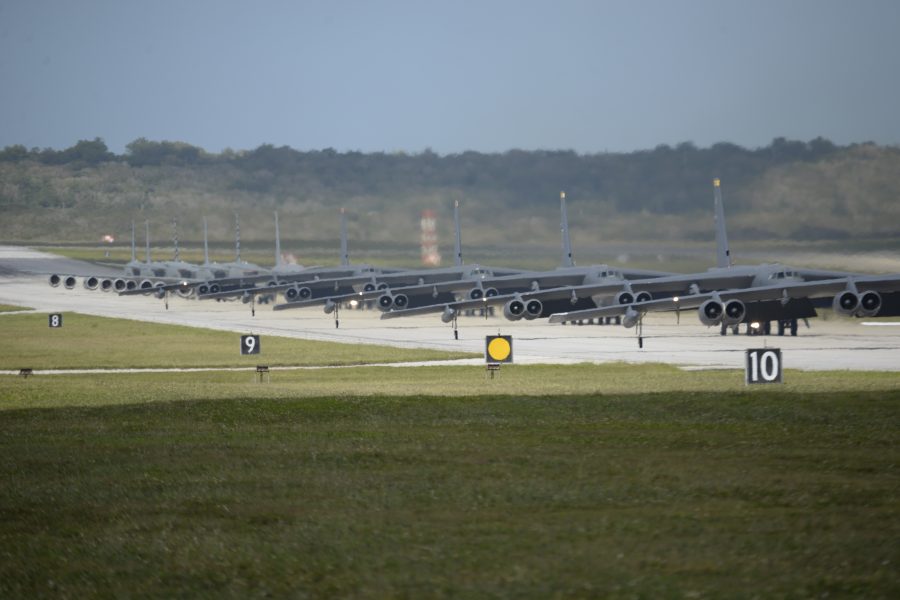 The Air Force announced April 17 it will no longer base strategic bombers outside of the continental United States, marking an end to the service’s 16-year continuous bomber presence at Andersen Air Force Base, Guam.

But before the last bomber left the island, USAF reminded the world of its combat power with an impressive “elephant walk” that included five B-52 strategic bombers, six KC-135 tankers, an MH-60S Knighthawk helicopter, an RQ-4 Global Hawk, and a U.S. Navy MQ-4C Triton.

“U.S. strategic bombers will continue to operate in the Indo-Pacific, to include Guam, at the timing and tempo of our choosing,” said Air Force Global Strike Command in a statement. “We will maximize all opportunities to train alongside our allies and partners, to build interoperability, and bolster our collective ability to be operationally unpredictable.”

The transition to a “dynamic force employment” model allows the bombers to operate from a “broader array of overseas locations” with greater resilience, while keeping the aircraft permanently based in the U.S., AFGSC said.

“Yes, we are absolutely adjusting our presence in theater when it comes to bombers,” Goldfein said April 1.

In March 2019, B-1Bs returned to Dyess Air Force Base, Texas, after a deployment to Al Udeid Air Base, Qatar. While a “task force” of B-52s deployed to the region shortly after, that mission was a short rotation in response to Iranian threats, not a regular deployment.

The “dynamic force employment” concept allows for the Air Force and broader military to be “strategically predictable, and operationally unpredictable” in sending the high-value assets to the Pacific, Goldfein said. The Air Force regularly sends similar “bomber task force” rotations to Europe.

Ray, in September, said the service is looking to improve the readiness of the B-1B by practicing task force movements locally in advance of the Lancer deployment to the Pacific this year.

The Air Force has maintained the continuous bomber presence at the Guam base since 2004, with B-52s and B-1s rotating to provide a strategic deterrent and exercise across the Pacific area of operations. The B-52s from the 69th Bomb Squadron deployed to Andersen last fall for the CBP rotation, and the 20th Bomb Squadron from Barksdale AFB, La., had been expected to replace them.

Editor’s Note: This story was updated on April 18 at 3:12 p.m. EDT to correct the date of the announcement.