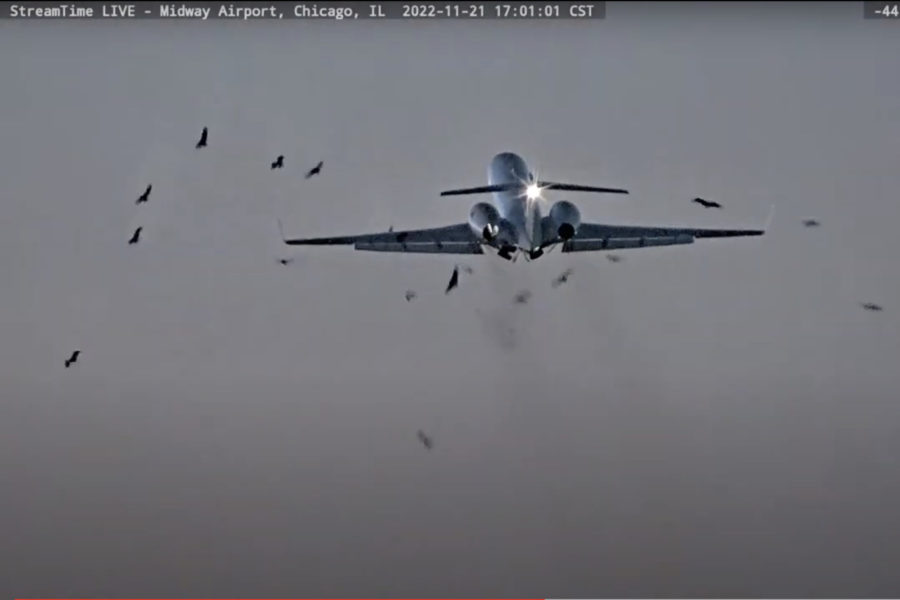 A video from a streaming website showed the plane taxiing to the runway and lifting off. As the C-37 began its ascent and raised its landing gear, the plane struck a flock of birds. Hokanson is one of the highest-ranking military leaders and a member of the Joint Chiefs of Staff.

StreamTime Live operates a camera near Midway International Airport, providing a video feed of airport operations, and captured the incident.

In a statement, the 89th Airlift Wing at Joint Base Andrews, Md., said one of its C-37s was involved in the incident.

The aircraft “struck several birds” as it was taking off from Chicago Midway International Airport, a spokesperson said. In the video, sparks are visible shooting out of an engine.

The C-37 is a modified Gulfstream business jet that transports high-ranking military leaders and civilians. The aircraft involved in the incident, tail code 70400, bears the Air Force’s iconic light blue and white livery used by some executive transport aircraft. Joint Base Andrews’s C-37s are assigned to the 99th Airlift Squadron, part of the 89th Airlift Wing.

Flight tracking data from the website ADS-B Exchange showed that the aircraft arrived in Chicago from Joint Base Andrews earlier in the day Nov. 21. As it attempted to take off that evening, the bird strike occurred, and the aircraft returned to the airport.

The National Guard Bureau said Hokanson was in the Chicago area to meet with business executives, attend an ROTC event at Chicago State University, and conduct media engagements. The details of Hokanson’s visit were first reported by WGN TV.

The passengers and crew were not in any serious danger, according to the 89th Airlift Wing’s statement.

“Out of an abundance of caution, the crew safely returned to the airport,” the statement said. “All members on board are safe, and the incident is under investigation.”