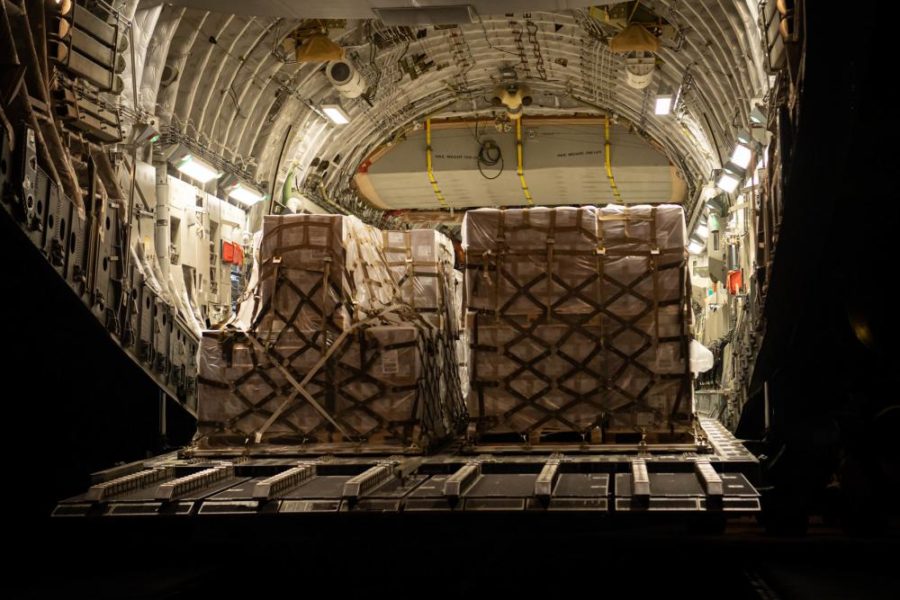 An Air Force C-17 flew from Ramstein Air Base, Germany, to Indianapolis on May 22, delivering 132 pallets of specialty infant formula to help address the shortages currently affecting parents across the U.S.

All told, the aircraft, assigned to Joint Base Pearl Harbor-Hickam, Hawaii, delivered 78,000 pounds of formula, enough for more than 750,000 eight-ounce bottles.

It’s the first step of U.S. Transportation Command’s Operation Fly Formula, an effort to source infant formula from abroad as U.S. production has cratered in recent months, leading to empty store shelves and outrage among parents.

President Joe Biden announced the operation May 18, with the White House initially saying that the Defense Department would use contracted commercial aircraft to deliver the formula from Switzerland to Indiana.

But as TRANSCOM planners worked on the issue, it became clear that to contract a flight would take at least several days, according to a May 23 press release.

During that time, Robert Brisson, TRANSCOM’s joint staff deputy director of operations, brought up C-17s that were “on Bravo Alert at Ramstein,” according to the release.

Defense Secretary Lloyd J. Austin III approved the use of military aircraft, and the Department of Health and Human Services contracted for trucks to transport the formula from Switzerland to Germany, a TRANSCOM spokesperson told Air Force Magazine.

Airmen from the 721st Aerial Port Squadron helped to unload the formula and then place it on the C-17, which flew to Indianapolis International Airport. There it was greeted by Agriculture Secretary Tom Vilsack as well as FedEx trucks to further transport the formula.

While the Air Force provided the aircraft for the first shipment of formula, the Defense Department has already contracted out the second flight of Operation Fly Formula to a commercial partner, the White House announced May 22. And moving forward, the TRANSCOM spokesperson told Air Force Magazine, the plan is to continue to have commercial partners provide the flights for the operation. U.S. Air Force Airmen assigned to the 721st Aerial Port Squadron load a pallet of infant formula onto a C-17 Globemaster lll aircraft assigned to Joint Base Pearl Harbor-Hickam, Hawaii, at Ramstein Air Base, Germany, May 22, 2022. The President of the United States launched Operation Fly Formula to speed up the import of infant formula from Europe to the United States due to critical shortages there. U.S. Air Force photo by Airman 1st Class Jared Lovett A C-17 Globemaster III assigned to Joint Base Pearl Harbor-Hickam, Hawaii carries pallets of infant formula at Ramstein Air Base, Germany, May 22, 2022. Hundreds of boxes of infant formula arrived from Switzerland and were unloaded, palletized and loaded on a C-17 for transport during Operation Fly Formula, an operation to quickly import infant formula to the United States that meets U.S. health and safety standards. U.S. Air Force photo by Staff Sgt. Jacob Wongwai Agriculture Secretary Tom Vilsack met the first shipment of baby formula that was transported from Europe by the military in Operation Fly Formula to in Indianapolis, Indiana on May 22, 2022. USDA photo
Air
Expand Comments