Skip to content
An F-35A Lightning II pilot with the 421st Fighter Squadron returning to Hill Air Force Base, Utah, from a deployment is met by family on July 31, 2019. Air Force photo by R. Nial Bradshaw.
Expand Photo 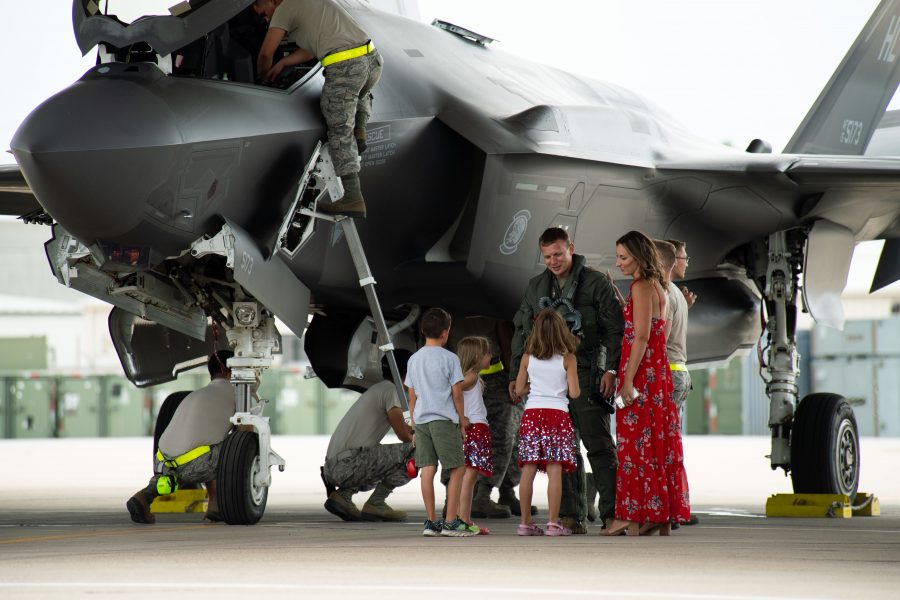 The Department of the Air Force recently released an assessment of public education quality in school districts serving USAF installations, and of how supportive states are of Airmen, space professionals, and their families when it comes to transferring professional licenses.

The department will use the findings, based on data available as of 2019, to inform future basing decisions, and hopes the results will motivate communities to lessen the challenges military families face in the areas of education and military spouse unemployment, according to a background document about the effort.

“In turn, these efforts will strengthen member retention, improve quality of life, and ease transitions for our Airmen and space professionals,” the document stated.

The Air Force’s assessment suggests it is rare for a state to achieve both top-tier public education and licensure portability.

For example, at Greeley Air National Guard Station, Colo., licensure portability excelled, though public education quality was in the lower-third percentile. On the flipside, Air Force families at Vandenberg Air Force Base, Calif., can access top-tier public education, but live in one of the two areas of the nation (along with Washington, D.C.) with the biggest obstacles to moving licenses.

Notably, a number of USAF installations that are expected to transition to the Space Force—Colorado’s Buckley Air Force Base, Cheyenne Mountain Air Force Station, Peterson Air Force Base, Schriever Air Force Base; and Florida’s Patrick Air Force Base—placed in the lower-third percentile when it came to public education quality.

“Many of those bases that are in the red … are also quite rural areas that are going to lack a lot of the, what we’ll call local infrastructure to begin with, right? So you’re going to have potentially less funding for your local school systems, but you’re also going to have fewer employers and, you know, economic incentives for employers to hire local military spouses,” Jennifer Akin, the co-director of applied research at the nonprofit organization Blue Star Families, said during an Aug. 10 interview with Air Force Magazine. “And many rural areas [are] somewhat disadvantaged by this particular framework anyway.”

However, she noted, rural areas also often translate into cheap land that’s easy to convert into a military installation.

“And that’s historically how we’ve kind of set up a lot of bases, but also … they have a lot of space around them, which you need for some of these operations,” she said.

Maxwell Air Force Base, Ala.—home of Air University and Air Command and Staff College—and the U.S. Air Force Academy both placed in the lower-third percentile for public education quality.

On the academic side, the Department of the Air Force looked at criteria in three broad categories: academic performance, school climate, and service offering, and sourced data from the Education Department and the Stanford Education Data Archive.

The resulting evaluations for each installation give its public education resources a color-coded score that essentially places it in a lower third (red), medium third (yellow), or upper third (green) percentile. And while there isn’t a numerical score given for each installation, charts under the “Public Education” header allow people to see how theirs compared with other DAF installations.

On the licensure portability side, DAF honed in on the following professional fields, and wrapped other occupations into a “Plus all other professions” category:

For all categories save for law, it considered criteria involving compacts, military-specific rules, and other obstacles to license accommodation. For the legal profession, it only honed in on the latter two.

Unlike the education-related scores, licensure-portability color scores don’t correspond to percentiles, Air Force spokesperson Sarah Fiocco explained in an email to Air Force Magazine. Instead, the colors indicate how supportive each state’s rules regarding license transfer are, with red being the least, yellow being moderately, and green being the most supportive of such efforts, she explained.

And regardless of how well each installation fared on either side of the analysis, the report identified areas of potential improvement.

Association of Defense Communities President Joe Driskill praised the frameworks used in the assessment. ADC was one of the nonprofits the service consulted during the framework-development process.

“Creating the quality of life that supports and sustains our service members and families is at the heart of every defense community,” he said in a statement provided to Air Force Magazine. “This new framework provides an important tool for our communities to assess education opportunities for military children and the ability of military spouses to maintain their careers, especially in comparison to other communities across the country.”

Akin—whose organization USAF also consulted during the process—said that while the frameworks aren’t 100 percent comprehensive, they’re solid tools leaders can use to affect positive change.

“This framework doesn’t account for a lot of the kind of cultural community issues that may be at play, that are barriers, but it does address … specific actions that local and state leaders can take to help demonstrate to the Air Force, their willingness to work with the military to set the conditions there locally for military families to thrive,” she said in an Aug. 10 interview with Air Force Magazine.

On the portability side, Akin said those cultural issues include the daily demands of Airmen’s and space professional’s career fields, as well as the availability and affordability of childcare. And on the education side, she said, these “squishy issues,” which she said lack “a tangible way” of being quantified, include schools’ ability to consistently make new kids feel welcomed.

If an installation commander finds their location fell short on the assessment, Akin said they’re not powerless to help chart a better course for the future.

First, she advises commanders to get an in-depth understanding of both licensure and education-quality issues, since they impact “the quality of life for their entire installation,” but can be new territory for individuals who aren’t dealing with them firsthand.

“Then, they need to work quite closely with their school liaison officer to make sure that their families are feeling supported, they’re not seeing many issues, that they understand the military interstate compact, and that they’re willing to engage in conversations with how to address specific issues and improve them,” Akin said. “I think on my wish list of things, I’d also love to see them conducting town halls locally with parents and spouses to better understand specific issues local to the community.”

If Congressional legislators find that installations they represent are experiencing obstacles to licensing, Akin said they should “encourage their state legislatures” to join forces with the Defense Department’s State Liaison Office to turn the situation around.

“I think there’s a lot of good data and a lot [of] great work around, like, what these interstate compacts can look like, and they can really hone in on, you know, what is feasible what is not? Are there occupations that require some additional credentialing? What are those? Why are they state-specific?” Akin said.

According to Akin, some license-transfer rules make sense—like barring an engineer who’s new to California from automatically moving their license over, since their previous state might not have required them to know how to create earthquake-proof buildings.