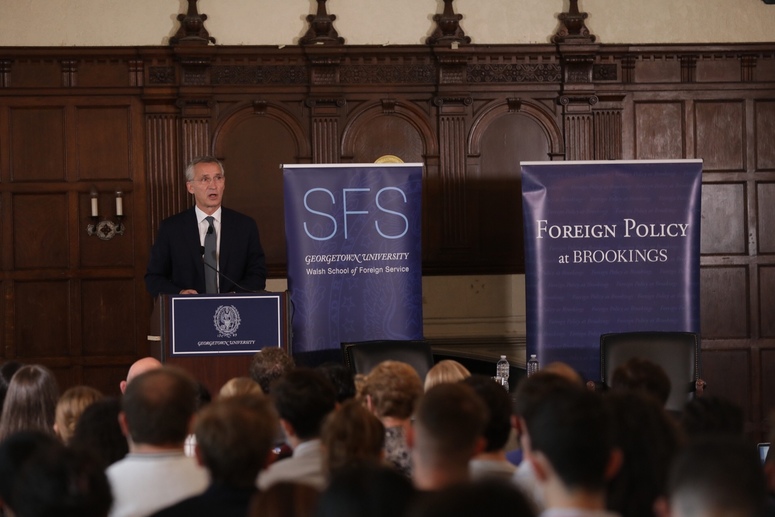 After Afghanistan, Stoltenberg Says NATO Mission Turns to Deterrence and Defense ‘at Home’

NATO Secretary General Jens Stoltenberg met with President Joe Biden and Defense Secretary Lloyd J. Austin III on Oct. 4 and said the following day that after two decades in Afghanistan, NATO will redirect its resources to defense of its 30 member countries. That will include new alliances with Pacific partners and efforts to defend against the “blurred line” between peace and war created by cyber threats.

Stoltenberg’s meeting with Austin was his 11th virtual or in-person meeting with the Defense Secretary since February, when consultations focused heavily on the American and NATO exit from Afghanistan.

In public comments at an event Oct. 5 co-hosted by the Brookings Institution and Georgetown University, the Secretary General defined the importance of transatlantic unity to confront an aggressive Russia and coercive China.

“The need for transatlantic unity is greater today than at any time since the end of the Cold War,” Stoltenberg said.

“We are at a pivotal moment for our shared security where we face a more dangerous and more competitive world,” he said, characterizing Russia as “more aggressive abroad” and China as using its economic and military might to “coerce other countries and exert control over global supply chains, critical infrastructure, and other assets.”

Stoltenberg said the alliance has been evolving since 2014, when Russia invaded and annexed the Crimean peninsula from Ukraine. NATO has strengthened Baltic and Black Sea partners and placed more combat-ready troops on its eastern flank. He said that as the alliance develops its NATO 2030 strategic concept, China will figure heavily into the security of the North Atlantic alliance.

“We are shifting our efforts and resources from large combat operations outside the NATO territory to further strengthen our deterrence and defense at home and prepare for a world of greater state-to-state rivalry,” he said.

In welcoming remarks at the Pentagon, Austin thanked Stoltenberg for NATO’s assistance with the Afghanistan evacuation effort that concluded Aug. 31 in Kabul, and he underscored the importance of NATO’s deterrent effect.

“NATO remains the essential forum for consultation, decision, and action on transatlantic security and defense issues,” Austin said. “We need continued investment in NATO’s deterrence and defense as well as a revised strategic concept that will guide the alliance’s approach to the evolving strategic environment.”

Stoltenberg indicated at Brookings that would mean strengthening the capabilities of aspiring NATO members such as Georgia and Ukraine, which suffer from protracted conflicts spurred by Russia.

“There is a lot in between nothing and full membership,” Stoltenberg said.

“This is something I discussed, actually, yesterday with President Biden,” he added—“that we need to step up and do more for those aspirant countries because as long as they’re not members, we should provide more support, more training, more capacity building, help to implement reforms to fight corruption, and build their security and defense institutions.”

Afghanistan After the NATO Withdrawal

In a question-and-answer period hosted by Brookings and Georgetown, Stoltenberg said the Afghanistan effort was worthwhile and that the alliance still needed to evacuate refugees and protect against the country again becoming a terrorist safe haven.

“The mission was not in vain,” he said, highlighting that no terrorist attack has been staged from Afghanistan in the past 20 years. “Those who have paid the ultimate price, those who have lost loved ones, family members, they should know that actually, they made an important contribution. They made the difference in the fight against terrorism.”

Stoltenberg also said it was not surprising that the Taliban took Afghanistan—the surprise was how quickly the group was able to seize power—and he said NATO must stay vigilant in tracking the developments in the country.

“The main task now is to do whatever we can to preserve as much as possible of the achievements we made on terrorism,” he said. “That means to hold the Taliban government accountable for their promises on terrorism, … but also to be ready to strike over the horizon, long distance, and to stay vigilant as NATO allies, to follow and monitor closely any attempt to reconstitute international terrorist groups in Afghanistan aiming at us.”

Stoltenberg said he did not like to “use the word hopeful about the Taliban” and said NATO capabilities to strike have appeared to pressure the new government to cooperate with the allies and restrain from outright conflict.

“China’s close to us in cyberspace. We see them in Africa. We see them in the Arctic. We see them investing heavily in our own infrastructure,” he said. “NATO allies realized that 5G network matters for our security, for the resilience of societies.”

Stoltenberg said NATO is strengthening its cyber defenses, increasing the resiliency of critical infrastructure and supply chains to reduce vulnerabilities.

He also said the trend of more cyber attacks, which often emanate from adversaries such as Russia and China, is blurring the line between peace and war.

“In hybrid, in cyber, and so on, there is a much more blurred line between peace and war, aggressive actions or peaceful interaction,” he said—a truth that makes cyberspace a warfighting domain.

NATO is also working with Pacific allies to defend the “rules-based international order,” the term often used to describe freedom of navigation in areas such as the South China Sea and East China Sea, where China has exerted territorial claims and demonstrated hostile behavior toward commercial vessels of smaller, neighboring countries.

Stoltenberg was asked if he supported the recent military technology sharing agreement between the Australia, United States, and the United Kingdom, known as AUKUS, the first effort of which is the sharing of nuclear submarine technology, a move that miffed France, a NATO ally, which will lose a lucrative diesel submarine contract with Australia.

“I understand that France is disappointed,” he said. “At the same time, NATO allies agree on the bigger picture that we need to stand together, also working with our Asia-Pacific partners, which includes Australia, Japan, New Zealand, South Korea—and the AUKUS deal is not directed against Europe or NATO.”

While AUKUS will strengthen Australia’s capacity to help the U.S. deter Chinese aggression by significantly enhancing the reach of its submarine fleet, Stoltenberg predicted that the NATO 2030 strategic concept also will focus a lot more on China. He said he is looking ahead to the defense ministerial meeting later in October.

“The rise of China matters for our security. It has an impact on our security, and that applies for all allies,” he said. “I expect that the upcoming new strategic concept for NATO will actually reflect a much more comprehensive and unified position on how to relate to China.”