Skip to content
Air Force Research Laboratory's Space Vehicles Directorate held a ribbon cutting ceremony April 11, 2022, to open its Skywave Technology Laboratory located at Kirtland Air Force Base, N.M. The facility will support the understanding of radio wave, also called skywave, disturbances as AFRL studies their propagation in the atmosphere. One of the lab’s two testing platforms is seen on the left. Air Force photo by Maria Mendoza.
Expand Photo 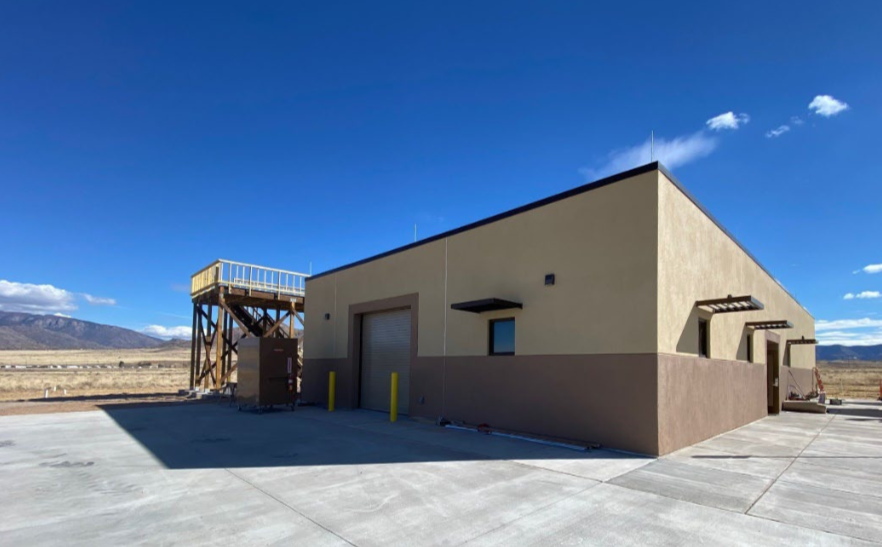 Members of the directorate’s field deployment team bounce radio waves and other electromagnetic radiation off the upper atmosphere to predict conditions in the near-Earth space environment and how the conditions might affect spacecraft.

Becoming more aware of the conditions could help further the Space Force’s priority of space domain awareness, said the leader of the directorate, Col. Eric Felt, in a statement announcing the new lab. Monitoring the environment could help to differentiate natural effects on a satellite from unfriendly ones.

Electronic warfare, or EW, may pose a greater risk to satellites than kinetic ground-launched weapons, such as in Russia’s 2021 anti-satellite test. In a virtual talk by the Center for Strategic and International Studies on April 20, CSIS fellow and deputy director of its Aerospace Security Project Kaitlyn Johnson predicted as much.

Johnson pointed out how “critical this weapons technology has become in current and future warfare. So I think we will continue to see that expanded and developed, not just attacking GPS but also … communications satellites—and attacking the ground stations, not just the satellites themselves.”

In its 2022 report “Global Counterspace Capabilities,” the Secure World Foundation said Russia “places a high priority on integrating electronic warfare (EW) into military operations and has been investing heavily in modernizing” it.

“Russia has a multitude of systems that can jam GPS receivers within a local area, potentially interfering with the guidance systems of unmanned aerial vehicles (UAVs), guided missiles, and precision guided munitions,” according to the report. However, Russia hasn’t yet been known to interfere with GPS satellites directly through EW.

China, too, “places a heavy emphasis on electronic warfare” and “likely has significant EW counterspace capabilities against [the Global Navigation Satellite System] and satellite communications,” according to the report.

In the interest of providing “better, faster, and smarter space technology,” the Rapid Architecture Prototyping and Integration Development lab benefits both the Space Force’s Space Warfighting Analysis Center and its Space Systems Command. The lab will “offer a collaboration venue for government, industry, and academia experts to gather for the advancement of space technology development,” according to a statement by AFRL announcing the new lab.

Also located at Kirtland, the $7.3 million RAPID lab measures 14,000 square feet. About 12 people will work in the lab day to day, but it can accommodate 40 to 50 more in “collaborative simulation workspaces” for given projects.

“Through modeling and simulation, we’ll be able to rapidly test out programs without the time-consuming and more expensive process of building a satellite,” said Col. Jon Luminati, who leads the Integrated Experiments and Evaluation Division of the Space Vehicles Directorate.

The Space Warfighting Analysis Center, or SWAC, is working through force designs for the future resilient architecture. David Voss, director of SWAC’s Spectrum Warfare Center of Excellence, described the work in an interview as figuring out, “how do we make things interconnected and interoperable across the breadth of the role space could potentially play” across DOD.

Space Systems Command, meanwhile, is tasked with developing a constellation of missile-tracking satellites in medium Earth orbit, or MEO. These would, in part, add a “layer” of resiliency in case of disruptions to the legacy satellites in higher geosynchronous orbits or to the Space Development Agency’s planned lower constellation in low Earth orbit.

“Over the past two decades, we have explored the tremendous and ever-increasing military utility of small satellites,” said Felt, “and through the modeling and simulation and collaboration that will occur in RAPID we will take small satellites technology to another level.”