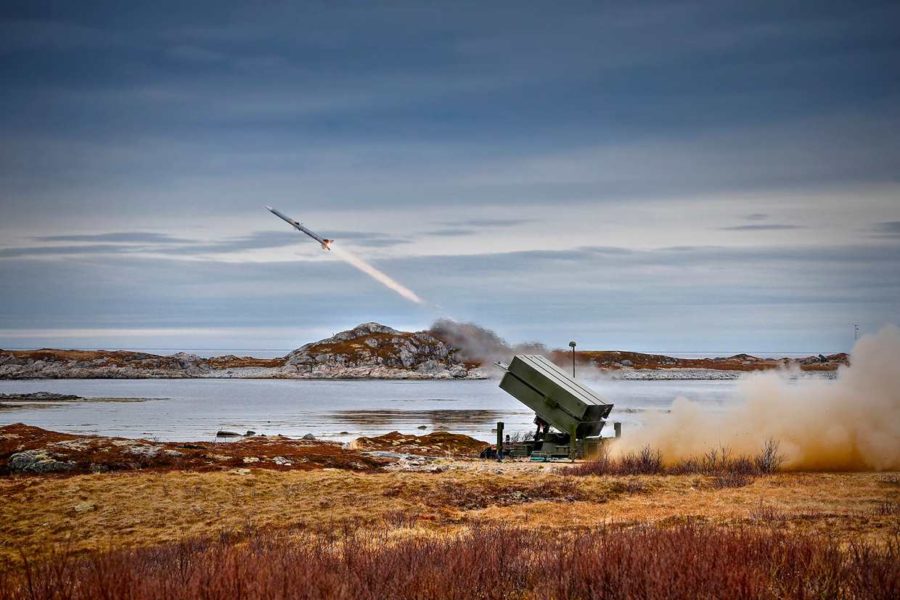 The “layered” test showed how the existing NASAMS system could defend air bases against cruise missiles at varying distances. Raytheon Missile & Defense announced the results of the test Sept. 7, when company officials took questions on a call with reporters.

The AFRL wanted to evaluate “low-cost, high technology readiness level capabilities that could provide near-term air base air defense capability,” said Jim Simonds, the lab’s program manager for the experiment, in a statement. The test came together in only 10 months. Simonds concluded that the “layered defense solution could provide immediate defensive capability.”

The test incorporated the AIM-9X Sidewinder as its shortest-range option; the Advanced Medium Range Air-to-Air Missile (AMRAAM) for the mid range; and the AMRAAM-Extended as the longest-range option.

The contract to completed the test predated the war in Ukraine and was unrelated, the official said. The U.S. had included eight NASAMS systems in its assistance to the country as of Sept. 8, according to a fact sheet.

Raytheon and its partner in building the NASAMS, the Norwegian company Kongsberg Defense & Aerospace, performed the test at Norway’s Andoya Air Station, north of the Arctic Circle.

Twelve countries already use NASAMS, and “time and time again, regardless of whether we’re in Europe, the Middle East, or somewhere out there in [the U.S. Indo-Pacific Command area of responsibility], this solution marries itself up very nicely for the threats the those particular customers are facing,” DeAntona said.

Without disclosing the type or types of radars that detected the cruise missiles in the test, John Norman, Raytheon’s vice president of requirements and capabilities for air power, told reporters it proved that forces could “operate globally with a variety of sensors.” The system’s open architecture “allows us to bring in not just the current, existing sensors, but all future sensors and future [command and control].”

Receiving targeting information from Army radars, the two contractors and AFRL “first passed targeting information” to the Air Force’s already fielded Battle Space Command and Control Center—described as a “capability”—then “relayed key data” to a Kongsberg Fire Distribution Center (FDC) “for threat evaluation and weapon assignment,” according to Raytheon’s news release about the test. “The operator in the FDC used that information to close the kill chain by selecting and firing the most effective missile from the NASAMS multi-missile canister launcher.”

Norman described the significance of the test as providing “an operationally relevant example of how you use an open architecture system that exists today … to provide that medium-range defense against the cruise missile.”

Considering the problem from the Air Force’s perspective, it’s “got to be able to protect these airfields,” Norman said. “We can’t pick up and move them. We can disperse forces, and we can play that shell game to a point, but we truly have to have the ability to protect our bases because the supply chain will go through there.”

He framed the test as a modest success.