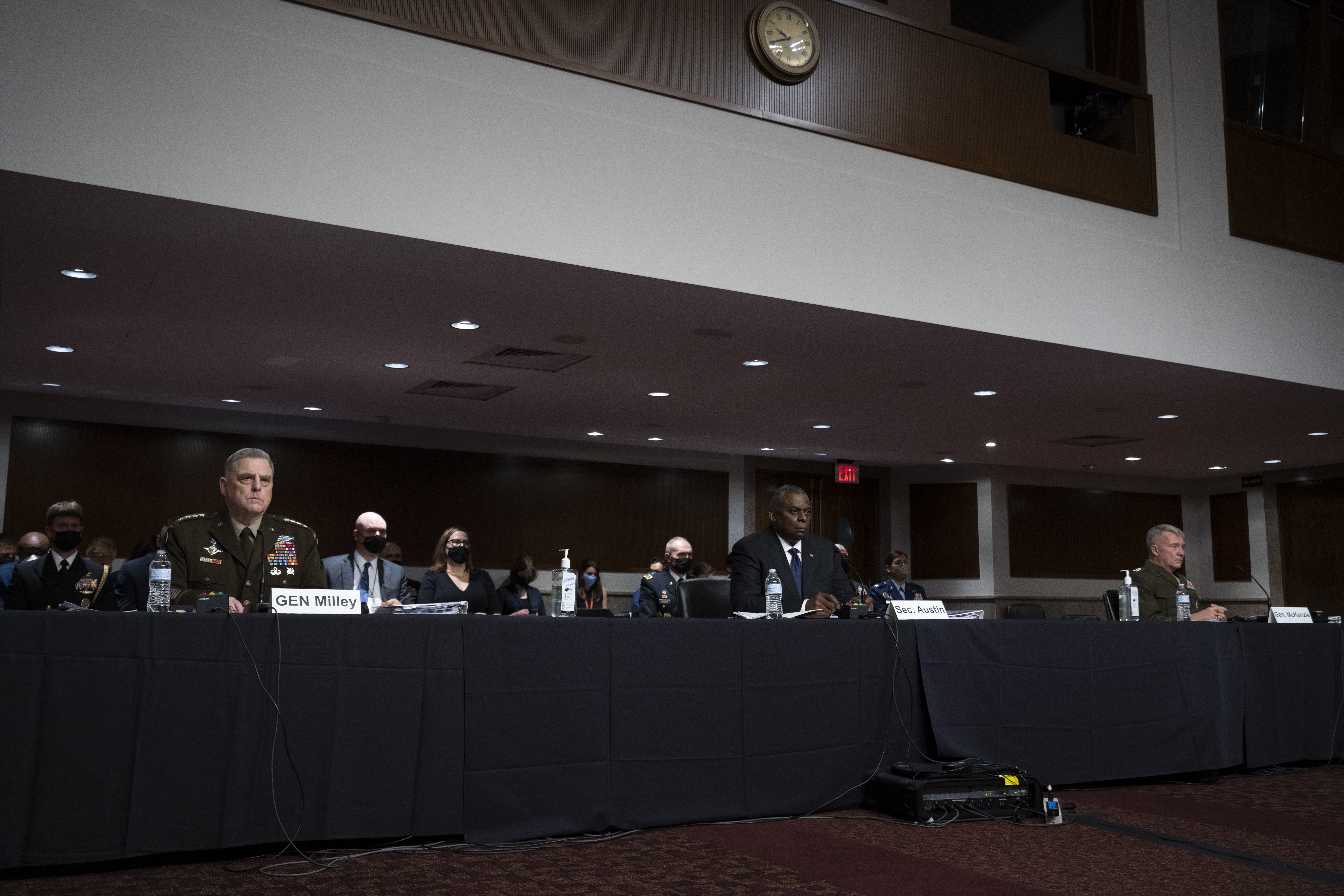 Constantly shifting strategies, an Afghan military built in the “mirror image” of U.S. forces, and poor intelligence are all lessons that American military leaders can take from 20 years of the Afghanistan War, top Pentagon officials said Sept. 28.

Defense Secretary Lloyd J. Austin III, Chairman of the Joint Chiefs of Staff Army Gen. Mark A. Milley, and U.S. Central Command boss Gen. Kenneth F. McKenzie Jr. appeared together before the Senate Armed Services Committee for the first time since the end of the Afghanistan War and faced more than five hours of questioning on the conflict, from years of stalemate, to a withdrawal that turned deadly, to where things stand moving forward.

“One of them, for example, is the mirror-imaging of the building of the Afghan National Army based on American doctrine, tactics, techniques, and procedures,” Milley said. “And that made a military that … may have been overly dependent upon us, our presence, contractors, and higher tech systems in order to fight a counterinsurgency war.”

Over two decades, the U.S. spent some $83 billion to train and outfit the Afghan armed forces. In particular, the Afghan Air Force was considered to be the military’s main advantage over the Taliban. But as U.S. troops and contractors withdrew, that air force quickly lost readiness. Plans to conduct remote advising from over the horizon were ambitious at best—especially in a society with extremely limited access to technology.

“You’re talking to people who are coming out of rule by the Taliban, who imposed Sharia law, a Stone Age approach to these things,” McKenzie said. “You cannot impose technological literacy quickly. So that’s why it took a long time, and we were still not finished with the Afghan Air Force. There’s a lot of contract maintenance done for a lot of air forces around the world. The Afghan Air Force is not unique in that regard. Although in this case, it was particularly telling because they were so dependent on it.”

Not all of the mistakes lay with the Afghan military, though. Sen. Gary Peters (D-Mich.) pressed Austin on American military leaders who repeatedly shifted strategy year after year, unable to break a stalemate, noting that one observer called the result “20 one-year wars,” not one 20-year war.

Austin, for his part, said leaders “have to ask ourselves some tough questions,” among them: “Did we have the right strategy? Did we have too many strategies?”

“If you’re reshaping that strategy, every year, one year at a time, then that has consequences,” Austin said.

Toward the end of the war, as the Taliban made rapid advances across the country, estimates of how long the Afghan government would survive repeatedly shrank. Milley, however, has repeatedly said those estimates from the Intelligence Community never predicted the stunning final collapse of the Afghan armed forces and government in the span of less than two weeks.

On Sept. 28, senators pressed Milley as to how the intelligence erred so badly, which he tied back to another military lesson: A lack of understanding of the Afghan Army’s morale and willingness to keep fighting without the U.S.

“We pulled our [military] advisers off three years ago,” Milley said. “And when you pull the advisers out of the units, you no longer can assess things like leadership. And we can count all the planes, trucks, and automobiles, and cars, and machine guns, and everything else, but you can’t measure the human heart with a machine. You’ve got to be there.”

The importance of military advisers was key in other conflicts, Milley added, such as in El Salvador and Colombia, when the U.S. offered technical support to governments fighting insurgencies but let their armies take on “the burden of all the fighting.” By contrast, the Afghanistan War became “Americanized,” Milley said.

Beyond the lessons cited by Austin, Milley, and McKenzie, Sen. Tammy Duckworth (D-Ill.) said she would introduce legislation to create an independent commission to study the full scope of the Afghanistan War, starting from its background and looking ahead to the future, an approach Austin endorsed.

But while the U.S. presence on the ground is over, both Milley and McKenzie warned that the military’s task of preventing terror threats is far from finished. Under questioning from Sen. Joni Ernst (R-Iowa), Milley said the task of defeating terror threats from Afghanistan has only gotten harder now.

The principal reason for that is the current state of intelligence, surveillance, and reconnaissance capabilities in the region. At the moment, the closest base from which the U.S. can conduct ISR operations is Al Udeid Air Base in Qatar, hundreds of miles away.

The Pentagon has been working to secure basing rights in a neighboring country to Afghanistan for months now, and Austin confirmed Sept. 28 that the U.S. had spoken to a seemingly unlikely partner for such an agreement—Russia.

Asked about a recent Wall Street Journal report that Milley had spoken with his Russian counterpart about using Russia’s Central Asia bases to monitor Afghanistan, Austin said he had done so after Russian President Vladimir Putin offered the idea to President Joe Biden.

While those discussions continue, ISR operations are “very hard” but not impossible, McKenzie added.