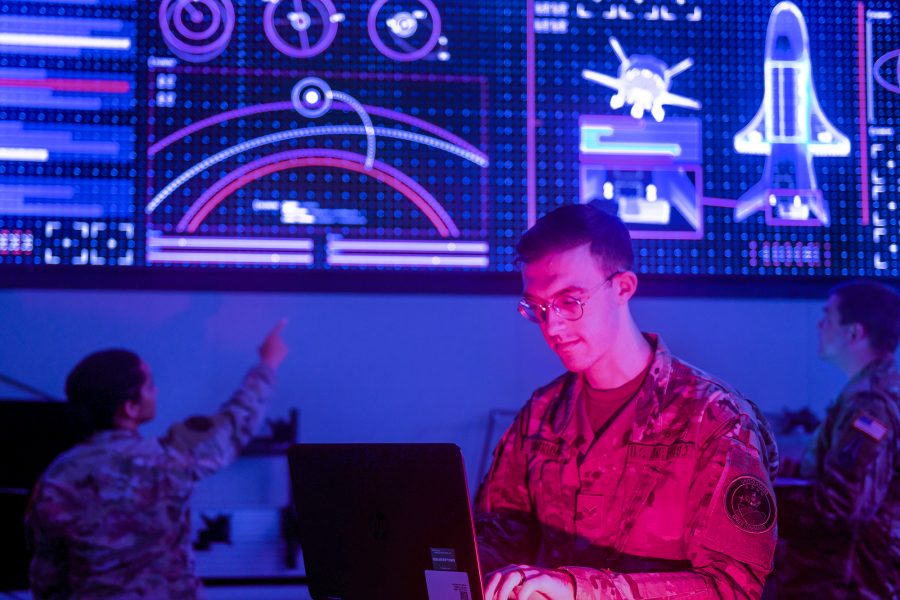 Rules governing how the U.S. military can buy software and networking tools are standing in the way of rapidly developing adaptable networks that can win future wars, according to a new paper from the Mitchell Institute for Aerospace Studies.

“Speed is Life: Accelerating the Air Force’s Ability to Adapt and Win” posits that “bureaucratic systems” actually prevent the Air Force and other military services from rapidly developing, experimenting with, and fielding new software and networks, author Heather Penney said on a streaming webcast to discuss the paper.

“How we use” new aircraft and weapons “in new and creative ways … will make the difference” in future conflicts, Penney said. Datalinks and networks are “becoming the foundation of how we fight,” she added. To prevail in a future conflict, “We’re going to need to adapt our architecture faster” than an enemy can attack, disrupt, or exploit it. That means the services must be able to quickly buy software or “mission integration tools” that can automatically build patches needed to get disparate systems talking to each other, she said.

Such mission integration tools will be key to the Air Force’s joint all-domain command and control, Advanced Battle Management Systems, and similar systems in the Army and Navy, Penney said. But, “believe it or not, we found that the primary barriers to being able to field these software tools” have to do with how funds are appropriated in certain accounts; the “color of money.”

Bending the rules on how the money is spent “scares people, because you can go to jail if you get it wrong,” she said. “This is serious stuff,” she added, but “the funding categories are fundamentally ill-suited for the pace of software development.” The limitations on who can spend the funds “prevents us from fielding software tools.”

There’s also no dedicated system program office for datalinks, she said. These and the waveforms that connect systems are typically managed as part of the data package for individual major weapon systems, Penney explained. That makes them subject to the broader weapon system’s timelines for upgrade and modification, which is too slow for today’s battlefield.

“Too often, mission integration falls below the cutline,” she said. Finally, “our networks are constructed at the [Combatant Commander] level, where they take months to engineer.” Because different datalinks can be incompatible with each other—the Air Force’s F-22 Intra-Flight Datalink (IFDL) and the F-35’s Multifunction Advanced Datalink (MADL) still can’t talk to each other, Penney noted—“it takes trained experts to build these over-arching battle networks to optimize connectivity.” But because the terminals are fixed, “we can’t change the way we fight,” she said.

If the services are going to become more adaptable to fast-moving changes on the battlefield, “we must address these bureaucratic barriers to fielding these mission integration software tools that can provide our forces with an adaptive advantage. Accelerating the pace of war means not only being “faster than the old Blue,” but being faster than “the Red.”

Penney said development times for network linkages are also too long, and again, are hampered by the fact that they are typically associated with individual systems.

Asked who should be making the case for change, Penney said the Office of the Secretary of Defense should be educating Congress “on some of the constraints and limitations these kinds of colors of money impose on not just the Air Force, but all the services. Networking is a service-“agnostic” issue, she said.

The OSD and Congress need to come to some agreements, though, because the issue isn’t limited to networking tools but “every kind of changing and adaptive software that we’ll have, which includes autonomy, [artificial intelligence], anything that has machine learning sprinkled into it, … and how we do test and verification.”

Timothy Grayson, director of the Defense Advanced Research Projects Agency’s Strategic Technology Office, also on the streaming session, said he thinks Congress “has actually been incredibly strong advocates for a lot of this.”

He noted that Congress has been supportive of an effort called STITCHES—System-of-systems Technology Integration Tool Chain for Heterogeneous Electronic Systems—tried out in last September’s ABMS experiment—and understands that “the only way you discover these issues is if you try it. So this is programmatic experimentation in parallel to warfighting experimentation.”

Grayson said Congress has been pushing precisely this kind of acquisition reform in recent years, but “the bigger problem,” he said, is the appropriations process.

“Because that’s where there’s a tendency to say, ‘I want things that are very accountable. We need accountability.’ By definition, this effort to be very adaptive, and trying to leave a lot of discretionary freedom on the money side, is counter to the concept of accountability.”

What the Pentagon should do, he said, is get ahead of the inevitable question and “think about how we can generate that accountability. How we create a … way to measure how well we’re spending that money while we have discretion. And I think that’s an … interesting open-ended problem.”

Penny said that such accountability “is one of the major concerns” of Congress.

“That’s their constitutional responsibility. We need to develop that kind of oversight as well as providing the kind of flexibility the services will need” to prevail in future conflicts, she added.

The Mitchell paper recommended that:

The Defense Department plans to propose new workforce “solutions” to Congress in 2023, Deputy Secretary of Defense Kathleen H. Hicks said in a virtual address to a Defense Advanced Research Projects Agency conference. Needs differ across the department, Hicks said. “Some organizations have a good sense of the tech talent…

F-22s at Edwards Air Force Base, Calif., ran third-party software during a test flight, a first for the Air Force’s fifth-generation fighters and a key milestone in the service’s quest to acquire and rapidly deploy cutting-edge technologies. The announcement from Air Combat Command also noted that the test flight demonstrated…