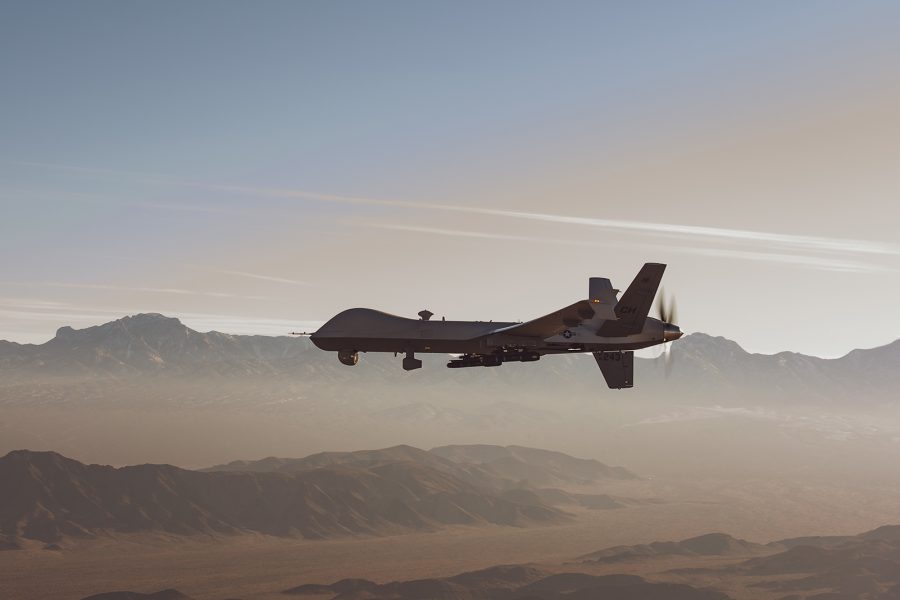 A General Atomics official said the company is surprised by the Air Force’s plan to stop buying new MQ-9 Reapers in fiscal 2020, after expecting to gradually wind down the production line.

Chris Pehrson, General Atomics’ vice president of strategic development, told Air Force Magazine he anticipated the service would phase out purchases of its iconic hunter-killer drone over the next three to five years as the Air Force approaches the planned end of the 363-aircraft program. Instead, USAF revealed in its fiscal 2021 budget request that it wants to buy its last 24 Reapers this year, cutting the total buy to 337 MQ-9s. Those final Block 5 aircraft will be delivered in 2023 and 2024.

“In response to direction in the 2018 National Defense Strategy, which directs the services to accept near-term risk in exchange for long-term capability enhancements, the Air Force is shifting its investment towards improved readiness and increased lethality for operations against near-peer adversaries,” service spokesman Capt. Jake Bailey said Feb. 26.

In other words, the remotely piloted MQ-9 has helped the Pentagon gather intelligence and kill terrorists in airstrikes across the globe for about two decades, but it wouldn’t hold up against the advanced air-defense missiles and high-tech aircraft that countries like Russia and China own. Reapers have shaped modern warfare as an unmanned mainstay in the wars in Afghanistan, Iraq, and Syria.

“The abrupt shutdown of the production line without a transition plan does jeopardize the [intelligence, surveillance, and reconnaissance] enterprise,” Pehrson said. “You’ll see impact eventually, when combat lines have to be reduced or … the assets aren’t there for training.”

Cutting production off now would complicate General Atomics’s procurement decisions for its final batch of MQ-9As and disrupt its revenue stream, even as it continues to upgrade the existing fleet.

“We’re actually going out about 22 months ahead of delivery and procuring the long-lead item parts, … whether it’s [satellite communication] equipment or engines, … to negotiate the best prices and get the best deals for the government,” Pehrson said. “Having the rug pulled out from under your feet at the last minute kind of disrupts all your supply chain investments that you’re making.”

Closing a production line also means the company has to repurpose its manufacturing space by moving heavy equipment and tools over the course of about 36 months. The decision would cause a bigger workforce rebalancing than normal, but the company says it wouldn’t be too difficult to spread people around to other products.

“If they stop production today, say, that’s going to have an immediate impact on … the composite manufacturing team, but as time moves on, that impact is going to ripple throughout the whole labor force,” he added. “We’ll have unemployment or a layoff situation in certain skill sets if we don’t find a way to fill this decreased demand immediately with some other new product or new capability.”

General Atomics also leases its services to operate aircraft, is participating in experimental small drone efforts, builds similar Gray Eagle drones for the Army, is pursuing unmanned aircraft for commercial cargo delivery and other civilian applications, and is investing its own money into more advanced combat designs.

“Think of them as a next-generation, what the MQ-9 does today, but it can do it in a less-permissive environment,” Pehrson said. “There aren’t any formal requirements yet. This is kind of building something in anticipation of what the requirements will be.”

He declined to say whether the company has built prototypes of those designs but indicated the ideas are newer than GA’s Avenger, which first flew in 2009.

While MQ-9s also fly unarmed border security missions for the Department of Homeland Security and participate in humanitarian assistance efforts like firefighting and disaster relief, those tasks may not be enough to keep the line open. General Atomics is pushing its MQ-9 customers to transition to the newer, more advanced MQ-9B as well, saying it’s less efficient to build multiple MQ-9 variants at once.

Pehrson is optimistic that Congress will step in to change the Air Force’s plan. Lawmakers have added money to buy more MQ-9s in the past, such as when they recently doubled the Air Force’s 2020 request by funding 12 extra aircraft.

“I think this was strictly a budget drill,” Pehrson said. “We’ve always kind of been in the [Overseas Contingency Operations] funding line and never really in the base, and demand for the platform is extremely high with the combatant commanders still.”

Pehrson believes the Reaper fleet will start aging out of service in the next five or six years. That will cause the Air Force to shrink the number of constant Reaper patrols and downsize the training pipeline, he said.

Bailey said the MQ-9 will still support commanders who need them, mainly in the Middle East and Africa.

“The MQ-9 will continue to fly for the foreseeable future—into 2030—while we look to invest in advanced technology to combat future threats and strengthen sensing grid capability,” he said. “MQ-9 operations wings will continue to support missions required of them.”

Bailey declined to answer how the plan could affect the Air Force’s vision of bringing MQ-9s to Tyndall Air Force Base, Fla., in the 2020s.