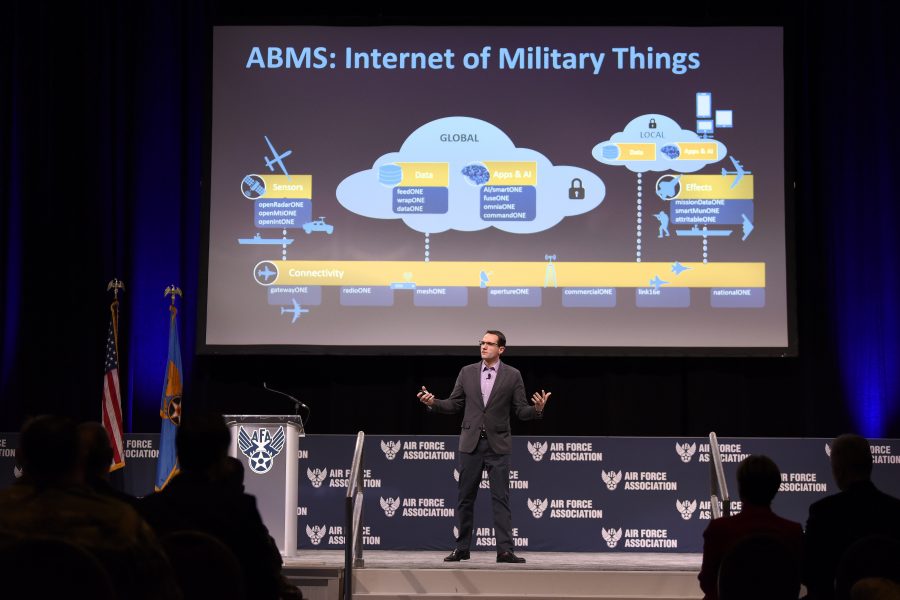 ORLANDO, Fla.—With the success of the first Advanced Battle Management System experiment, more commanders are starting to take notice and hoping to get in on the action.

Speaking to an audience at AFA’s Air Warfare Symposium here, Air Force acquisition chief Will Roper referred to ABMS as the “Internet of Military Things.” The concept, though a break from traditional defense acquisition thinking, is not new to the everyday consumer, who expects his or her devices to automatically connect to each other through a wireless network.

Roper used the example of a smartphone that seamlessly shifts from 5G to 3G when entering areas with a spotty connection, saying that’s what U.S. satellites and fighters need to do. “Everything needs that agility so that we don’t lose connectivity,” Roper said, adding, “The best advice we’ve gotten from Internet gurus is to push this capability out in thin slices that stack toward meaningful capability.”

That’s exactly what the service is trying to do through a series of regularly occurring experiments, the first of which was hosted by U.S. Northern Command in Florida last December. During the experiment, a “gateway” radio box on the ground allowed two fifth-generation fighters, the F-35 and F-22, to pass data back and forth. Roper said the event also used the digital cloud to let special operators in the field access combat information on a tablet.

Though not as sexy as two stealth fighters talking to each other, Roper is excited by the possibilities of moving to cloud-based data storage. Artificial intelligence could boost its utility by learning more about a particular user who’s looking for information, sorting through troves of available data, and pushing out the most relevant data to that person.

Pacific Air Forces boss Gen. Charles Q. Brown told reporters at the conference he’s been in regular conversation with ABMS Chief Architect Preston Dunlap to bring the third experiment to the Indo-Pacific. It’s still unclear if the exercise would piggyback on an existing PACAF exercise, or if it would stand alone, but Brown said he wants to make sure it includes not only U.S. assets, but also capabilities of joint partners.

Brown wants to build on past experiments to figure out “what are the right things you want to connect to actually get us down the appropriate path with the Advanced Battle Management System.”

Like Roper, he’s also interested in using the cloud to store data. But because the Indo-Pacific is so large, Brown wants to figure out how to protect data as it moves from one cloud to another.

“We have the capability to do this. … We collectively have to figure out how best to do it to protect the information … so you can have multi-level security,” he said.