Skip to content
A B-2 Spirit Stealth Bomber from Whiteman Air Force Base, Missouri lands at Keflavik Air Base, Iceland, August 28, 2019. This is the B-2s first time landing in Iceland. While in Iceland Airmen from Whiteman conducted hot-pit refueling, which is a method of refueling an aircraft without shutting down the engines. The use of strategic bombers in Iceland helps exercise Naval Air Station Keflavik as a forward location for the B-2, ensuring that it is engaged, postured and ready with credible force to assure, deter and defend the U.S. and its allies in an increasingly complex security environment. (U.S. Air Force photo by Senior Airman Thomas Barley)
Expand Photo 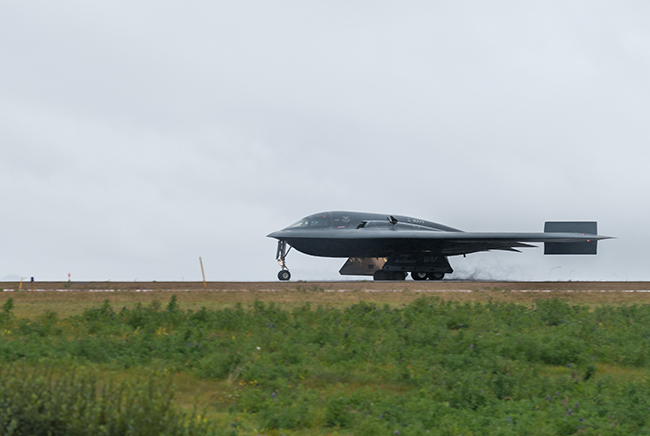 B-2 Visits Iceland for the First Time

A B-2 recently landed in Iceland for the first time, conducting hot-pit refueling at an Icelandic Coast Guard base that has hosted US aircraft for decades to keep a close eye on the Arctic.

The B-2 touched down at Keflavik AB on Aug. 28, where it refueled without the engines shutting down, according to an Aug. 29 US Air Forces in Europe release.

“The purpose of the flight was to conduct theater familiarization for aircrew members and to demonstrate U.S. commitment to allies and partners through the global employment of our military forces,” the release stated.

The B-2 joined USAF F-16s from Spangdahlem AB, Germany, that deployed to the Icelandic base in July.

US forces maintained a permanent presence at the former Naval Air Station Keflavik for nearly 50 years before it was disestablished as a US facility in 2006. Since then, NATO forces have rotated through the location.