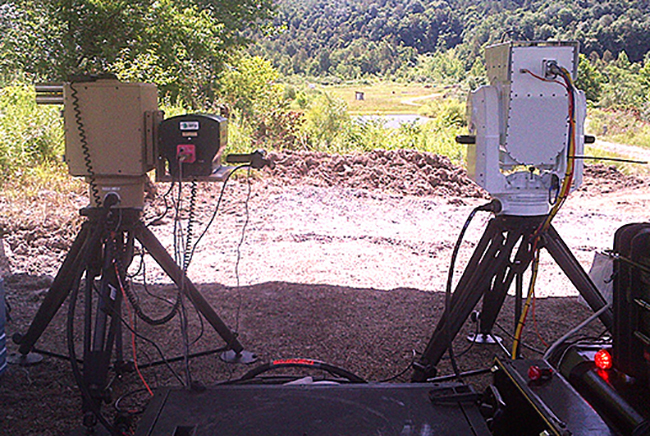 A recent set of experiments with laser and microwave weapons in Oklahoma is shaping how the Air Force moves forward with its plan to protect bases from drones using directed energy.

Five systems participated in the Air Force portion of the Maneuver and Fires Integrated Experiment, an Army-run demonstration at Fort Sill, Okla., that ran from Oct. 15 to Nov. 6.

Though the Air Force has vetted DE systems before, it participated in MFIX to explore command and control ideas for weapons that track and take down small drones. Each system connected to Army C2 and was run by security forces airmen.

The experiment downed about 80 unmanned aerial systems, Jirjis said, pitting single and multiple DE weapons against up to 20 UASes at a time.

Could the Air Force ramp up the test to include 100 drones, or 1,000? USAF isn’t ready to take on swarms of that size, Jirjis said, but the service could still see how its weapons fare against something like Intel’s drone swarm that put on a show over the 2018 Winter Olympics in South Korea.

“If the cost is reasonable, I would gladly go after something like that to try to test or experiment with it, because I think it would provide a lot of insight into how we do … the overall mission or operation,” he told Air Force Magazine in a Nov. 12 interview.

MFIX marked the first time the Air Force tried to challenge multiple sensors to prioritize tasks and choose the right option to handle an encroaching drone. Experiments last fall looked at standalone solutions that included their own battle management and electro-optical and infrared sensing capabilities and could be dropped anywhere. But that’s only one piece of the counter-UAS challenge.

He added that the team passed on what it learned about C2—such as needing speedier data-sharing and interfaces that work for new technologies like DE—and how it should evolve to others in the Air Force studying the same issue. While Jirjis declined to elaborate further, the demonstration could help shape broader efforts like the Advanced Battle Management System and related initiatives.

Seeing how the systems fall short also teaches the Air Force what it needs to pursue in more advanced weapons. If the technology can’t sense an incoming drone before it’s close enough to spy or do damage, or if it moves too slowly to take down the aircraft, the service would want to improve on those problems. A few products are starting to add in machine learning to address tracking and attack issues as well.

Some of the participating weapons systems are already used by others in the military—the Marine Corps bought Boeing’s CLWS. Others like ATA’s Locust are relatively new on the scene, Jirjis said, but that company has experience with integrating technologies for larger contractors and offers a similar interface.

“We had about 16 [interested] companies overall, but they ranged in terms of providing a portion of the solution set—providing a sensor or providing software or offering to do integration,” Jirjis said. “There are very limited solutions that provided that integrated package. There were a couple of them that did provide an integrated package, but [it] was different than the current mission set.”

For example, some offered the idea of putting lasers and microwaves on UASes themselves. But the Air Force’s current priority is near-term prototyping for base defense, followed by various forms of offensive and defensive airborne DE, rather than more extensive technology development.

Comparing five systems from a range of vendors “gave us a little bit better hindsight in terms of integration and thoughts to consider as we move towards that program of record on things that we like and don’t like,” Jirjis said.

“Acquisition guys and the test community are in the thick of trying to answer all the different questions that we had and try to analyze the actual results for the systems and the mission that we’re trying to accomplish,” he added.

The Air Force Life Cycle Management Center is evaluating industry’s proposals for how the service could set up full-fledged counter-UAS programs, as it moves toward buying one laser and one microwave weapon.

To help drive that decision, LCMC employees are involved with events like MFIX as well as DE weapon demonstrations overseas. Jirjis said officials are expected to pick the two systems in spring 2020.

He added that some systems shown during MFIX could also head overseas for more vetting, but that AFRL is still considering whether they are capable or ruggedized enough for that step.

Directed energy is one form of counter-UAS measures the Air Force has invested in over the past few years, ranging from ballistic rounds to nets and more. Air Force Magazine reported earlier this year that several USAF installations that house strategic assets like nuclear weapons are now armed with systems to protect against loitering unmanned aircraft.

Jirjis said Air Force Materiel Command is considering the progress DE weapons are making as it figures out what the right mix of kinetic and non-kinetic countermeasures might be and how to buy them. Officials must consider how easy a system is to use, how it works with other systems across the military, and more.

“They all performed admirably but we’re trying to figure out what makes sense for how we want to fight,” he said of the systems at MFIX. “Just because one vendor or another has killed a higher percentage of UASes than somebody else doesn’t necessarily mean that they were the best. … There’s a lot of aspects that define what a really good kind of system would be, not just the ability to mitigate those threats.”