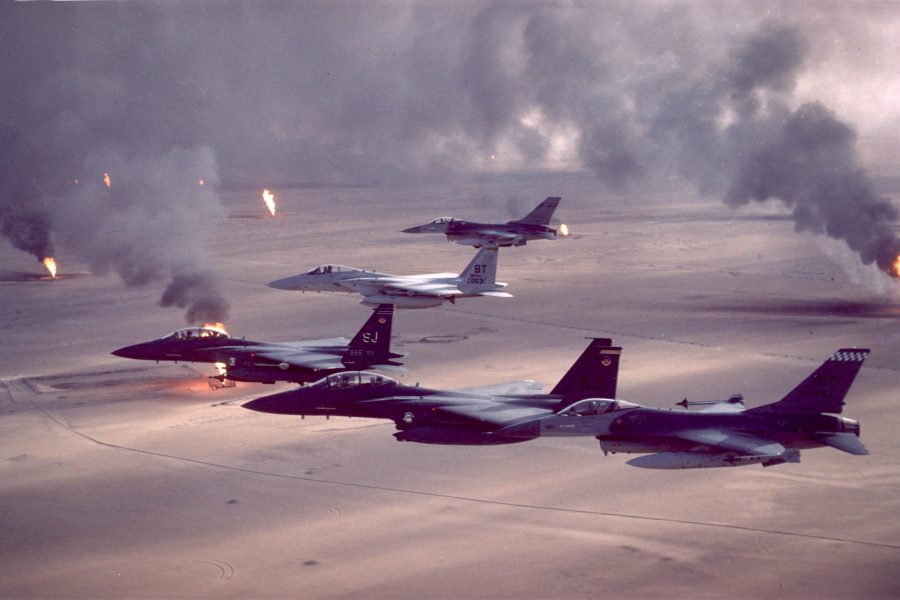 January 17, 2021, marks the 30th anniversary of the beginning of Desert Storm, the military operation to reverse Iraq’s August 1990 invasion of Kuwait. After a 20-week buildup of forces in the Persian Gulf region, a U.N-sanctioned, United States-led coalition of 35 nations unleashed a six-week air campaign followed by four days of ground combat, which drove the last Iraqi invaders from Kuwait on February 28, 1991.

Desert Storm was a military watershed, defining modern large-scale combat and marking the U.S. as the world’s undisputed military superpower. The brief conflict played a role in the dissolution of the former Soviet Union and prompted a “revolution in military affairs” response among world powers.

The first Gulf War saw the introduction of stealth, precision-guided munitions and space support on an operational scale. It also saw the implementation of new concepts of operation, such as “parallel warfare”— in which numerous targets were destroyed simultaneously, rather than in sequence, to blind, confuse and disrupt an enemy—and “effects-based operations,” wherein the desired effect, rather than the type of platform or weapon used, was the driving factor in assigning forces to campaign tasks.

Seven B-52s, launched from Barksdale AFB, La., took off on Jan. 16, carrying then-secret GPS-guided cruise missiles to the Gulf region and releasing them from standoff ranges into Iraq after a 17-hour flight. The missiles were targeted against command and control nodes, Iraqi leadership, powerplants, and a telephone exchange.

Air units deployed in countries inside and outside the Persian Gulf Region, as well as from aircraft carriers in surrounding bodies of water, followed up with an unrelenting rain of munitions on Iraqi fielded forces, both in Kuwait and Iraq itself, destroying in 42 days roughly half of that country’s fielded forces.

The air campaign began with strikes on sensors and command-and-control capabilities, which blinded Iraqi forces and denied them the ability to coordinate a defense. Coalition aircraft attacked airfields to prevent the Iraqi air force from mounting a defense against the allied air armada, and in the latter stages, hit individual armored vehicles with precision weapons—called “tank plinking”–to inflict massive attrition on Iraq’s ground forces.

Twenty-seven U.S. military aircraft went down during the conflict, and Iraq held 21 Americans as prisoners of war. Despite a warning to Iraqi dictator Saddam Hussein by U.S. President George H. W. Bush that prisoners must be treated humanely—as would Iraqi prisoners held by the coalition—American pilots were beaten and tortured, and some forced to make anti-coalition videos. Not all prisoners were repatriated.

In the last days of combat, hundreds of fleeing Iraqi vehicles consolidated onto a single road on their way out of Kuwait, where coalition air units could see and destroy them en masse; what came to be known as the “highway of death.” Former Chairman of the Joint Chiefs of Staff Gen. Colin Powell argued to President Bush that to continue the carnage would be “un-American and un-chivalrous” and damage America’s military credibility and moral authority with the world. Bush ordered a halt to the destruction, allowing surviving Iraqi troops to leave Kuwait.

An official cease-fire was struck March 3, 1991. Though Bush was criticized by some for not pressing on to the Iraqi capital and conquering Iraq, he later pointed out that the United Nations mandates authorizing the operation did not call for that and that the coalition would have likely broken up if the war had been expanded. He also had heeded Powell’s advice that “if you break it, you buy it,” meaning the U.S. would take over the physical and fiscal responsibility for the security and feeding of the Iraqi nation, which Bush said he was not prepared to do.

Could the U.S. achieve the same kind of swift, lopsided results in a similar theater war today? See “Desert Storm’s Unheeded Lessons,” from our December 2020 issue. Air Force Magazine’s Daily Report will look back at Operation Desert Storm with photos over the next six weeks.