Skip to content
Sen. Jack Reed (D-R.I.) speaks on the floor of the Senate after a vote on the 2022 National Defense Authorization Act on Nov. 29, 2021. Screenshot photo.
Expand Photo 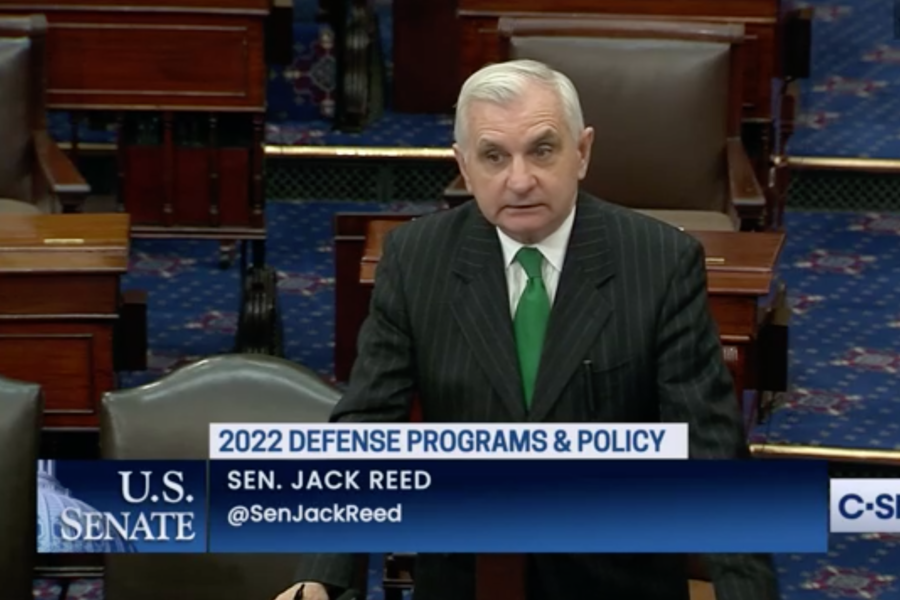 Back from a Thanksgiving week recess, the push to pass the 2022 National Defense Authorization Act hit another snag Nov. 29, as the Senate failed to vote to end debate on its version of the bill.

The 45-51 vote fell well short of the 60 votes needed, ensuring that the effort to invoke cloture failed and seemingly pushing the timeline for passing the annual defense policy legislation back. At the same time, Congress is staring down a Dec. 3 expiration date for its continuing resolution to keep the government funded. Under a CR, the Pentagon and other branches of government continue to operate with funding levels set from the previous year, delaying new programs and potentially costing money.

In remarks on the Senate floor just before the vote, Sen. Jim Inhofe (R-Okla.), ranking member of the Senate Armed Services Committee, accused Senate Majority Leader Sen. Chuck Schumer (D-N.Y.) of trying to “jam [the bill] through the Senate without adequate consideration.”

Inhofe also said that Schumer mishandled the Senate schedule, resulting in a last-minute rush that precluded an “open and robust” debate on amendments.

Inhofe’s comments follow a Nov. 19 sequence of events in which an effort to have separate floor debates and votes on 19 key amendments was derailed when a number of Republican Senators raised objections in protest of their own amendments not being considered. Among those 19 amendments was legislation that would repeal the 2002 Authorization for Use of Military Force (AUMF) against Iraq; prevent the Pentagon from taking adverse personnel actions against service members who refuse the COVID-19 vaccine; and reduce topline spending. It is unclear if or when those amendments will now be considered.

Inhofe’s counterpart on the Senate Armed Services Committee, Sen. Jack Reed (D-R.I.), argued that the process of putting together the NDAA has been “bipartisan” and included plenty of consideration of amendments, pointing to more than 100 amendments adopted in committee and 57 included in a “manager’s packet” as part of the bill considered on the main floor of the Senate.

“This is an unusual departure from what is typically the custom of this body, particularly when we’re beginning with a bill that has so much bipartisan support,” Reed said of the latest vote against cloture.

As multiple Senators noted, Congress has passed an NDAA every year for six decades now. That process can sometimes take until the very end of the year, but even by recent standards, the 2022 bill is behind. Even after the Senate does pass its version of the NDAA, the House and Senate will have to undergo the conference process, which is now likely to have its latest start since the 2013 bill.

Despite this, both Inhofe and Reed said they are confident the NDAA will eventually pass.

“We will have to do the NDAA. It will be done. I think Senator Inhofe is as committed to that as I am,” Reed said. “And we will have to use the procedures that are appropriate to get it done.”

Of the 57 amendments adopted in the manager’s package and awaiting passage, one from Sen. Lisa Murkowski (R-Alaska) calls for the Air Force to present to the Senate and House Armed Services Committees “​​a strategy for the Department of the Air Force for the acquisition of combat rescue aircraft and equipment.”

The Air Force’s combat rescue fleet is currently in the midst of a transition, as the HH-60W Jolly Green II is slated to replace the HH-60G Pave Hawk over time. The HH-60W, however, has faced potential delays due to protests of a roughly $1 billion contract for upgrades, and while the helicopter has completed developmental testing, it is still undergoing operational tests.

Another amendment, offered by Reed and Inhofe, would give the Space Force the authority to vary the number of officers considered for promotion to major general until the end of 2022. The Space Force’s current corps of general officers is light on two-stars—just three are currently in the service, compared to 10 brigadier generals and six lieutenant generals.