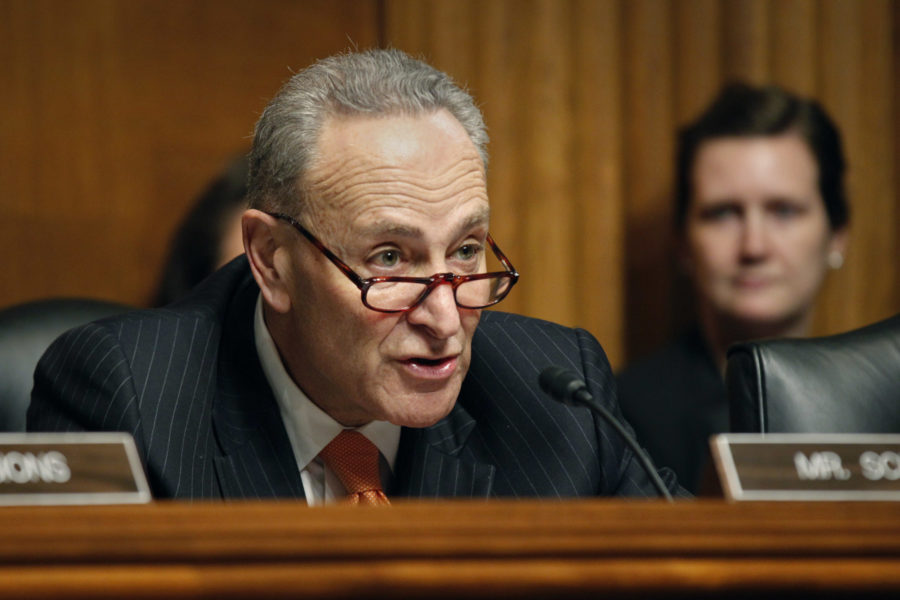 After weeks of waiting, the 2022 National Defense Authorization Act is on the move in the Senate as Majority Leader Sen. Chuck Schumer (D-N.Y.) took action on the bill Nov. 15.

The move comes after pressure from members of both parties in the House and Senate urging Schumer to take up consideration of the annual defense policy bill, which is considered “must-pass” legislation every year.

Schumer’s parliamentary procedure starts a process that could take days or even weeks, depending on how quickly Senate leaders want to press forward and whether any senator will raise objections and draw the process out. The Senate is also scheduled to be in recess Nov. 22-26 over the Thanksgiving holiday. Should the process drag into December, it would mark just the third time in the past 11 years that the NDAA has passed the Senate that late.

Also potentially lengthening the debate around the bill are the hundreds of amendments that have been filed in the past few days—791 in total as of Nov. 15. Virtually every member of the Senate has sponsored or co-sponsored an amendment, and as part of his floor speech, Schumer indicated that two more high-priority pieces of legislation will be added as amendments.

First, Schumer said he will include the U.S. Innovation and Competition Act, a bipartisan measure aimed at combating China and boosting investments in research, technology, and manufacturing, as an amendment to the NDAA. The USICA was passed by the Senate in June but has stalled in the House, and Schumer had previously raised the idea of tying it to the NDAA to speed up negotiations.

Schumer also said he will include an amendment to the NDAA that if approved would repeal the 2002 Iraq War authorization. The Senate Foreign Relations Committee approved such a measure in August, but it was never brought to the full Senate for a vote. Proponents say the Authorization on the Use of Military Force is no longer applicable to the current threats the U.S. faces in Iraq and is overly broad, while critics of a repeal argue that repealing it could have unintended effects and limit the U.S.’s ability to confront terrorist threats.

“The NDAA is the logical place to have that vote on the Senate floor,” Schumer said. “The Iraq War has been over for nearly a decade. An authorization passed in 2002 is no longer necessary in 2021, and in no way will repealing this measure impact our ability to keep Americans safe nor [will it] impact our relationship with Iraq.”

There will be votes on other amendments as well, Schumer promised. But there are not likely to be many. Senate staff are already working through the hundreds of amendments filed, a Senate Armed Services Committee aide confirmed to Air Force Magazine, sorting non-controversial, bipartisan measures into packages that will be adopted en bloc. Other measures will be considered by Senate leadership to determine whether they should be brought to the floor and voted on—in past years, generally between five and 10 amendments have gotten floor votes.

A number of the amendments offered by Senators touch on Pentagon-wide issues.

Sen. Josh Hawley (R-Mo.) introduced a measure to strip language from the NDAA that would require women to register for the draft.

Several amendments are aimed at the DOD’s COVID-19 vaccine mandate, with efforts from Republicans to either delay the mandate, create exemptions for those who have had COVID-19, or prevent anything other than an honorable discharge for those who refuse the vaccine.

Competing amendments from Sen. Tammy Duckworth (D-Ill.) and Sen. Rick Scott (R-Fla.) would establish studies to look into the 20-year Afghanistan War and what went wrong, with Duckworth’s measure establishing an independent commission and Scott’s forming a bicameral joint committee.

Sen. Cory Booker (D-N.J.) also introduced legislation that would require the service academies to provide Cadets and Midshipmen with their “initial issue of clothing and equipment” at no cost.

Sen. Robert Menendez (D-N.J.) along with Sen. Marco Rubio (R-Fla.) introduced the U.S.-Greece Defense and Interparliamentary Partnership Act of 2021 as an amendment, under which Congress would back selling F-35 Joint Strike Fighters to Greece. Greece has pushed to buy the fifth-generation fighter.

Several of the amendments proposed are targeted directly at issues concerning the Air Force.

In particular, Sen. Raphael Warnock (D-Ga.) introduced an amendment that calls for the Air Force Secretary to look into establishing an Advanced Battle Management System center of excellence. In Warnock’s state, Robins Air Force Base has already been promised some of the ABMS mission as the Air Force looks to retire the E-8C Joint STARS.

The two senators from Ohio, Republican Rob Portman and Democrat Sherrod Brown, introduced an amendment that would require a report from the Air Force on the benefits and costs of maintaining at least 12 aircraft each in the Air Force Reserve Command authorized for specialty missions such as weather reconnaissance, aerial spray, and firefighting.

Sen. Lisa Murkowski (R-Alaska) submitted an amendment requiring the Air Force to submit a strategy for “the acquisition of combat rescue aircraft and equipment,” while Sens. Mike Crapo (R-Idaho) and James Risch (R-Idaho) want a report and a plan from the Air Force for how Airmen will train and operate in environments without access to GPS.

Sen. John Thune (R-S.D.) introduced legislation that calls for the Air Force to invest in energy storage and backups for USAF bases with nuclear missions to ensure mission-critical functions can continue in the case of a power shortage caused by “a failure of the electric grid, a cyberattack, or a natural disaster.” Thune’s state of South Dakota is home to Ellsworth Air Force Base, which hosts B-1B bombers.

There are fewer amendments currently filed that touch on the Space Force, but one in particular, from Sen. Jim Inhofe (R-Okla.), could certainly impact the Space Force’s current structure. Inhofe’s amendment would prohibit, starting in October 2024, the use of Air Force personnel to provide operational support for Space Force installations, unless the Secretary of the Air Force certifies that only Air Force personnel are capable of providing the support necessary.

Also as part of the amendment process, Sen. Mark Warner (D-Va.) and Sen. Marco Rubio (R-Fla.) introduced the fiscal 2022 intelligence authorization bill, which passed out of committee but never received a floor vote, as an amendment. As part of that bill, there would be an annual report “evaluating the partnership between the National Reconnaissance Office and the Space Force.”