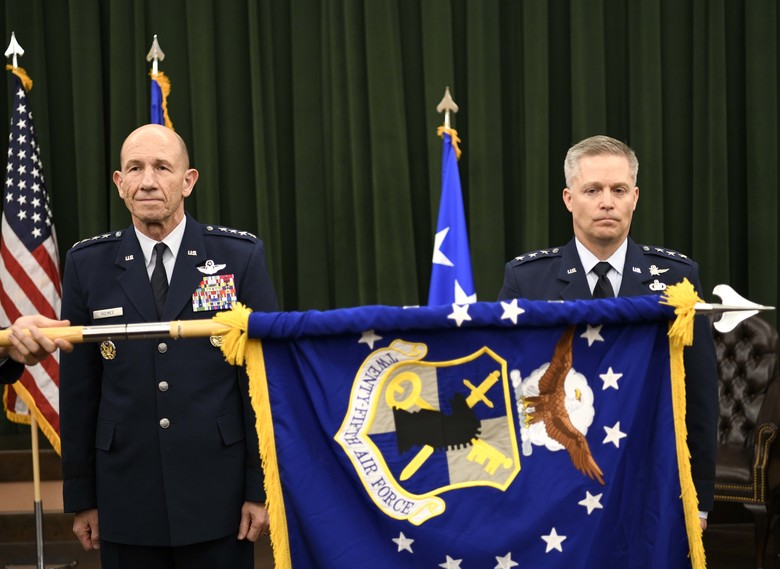 JBSA-LACKLAND, Texas—The Air Force on Oct. 11 formally stood up 16th Air Force, the new “information dominance” organization that will bring cyber, intelligence, and other operations together under one roof here after more than two years in the works.

Among the organization’s main charges are helping US Cyber Command protect the nation’s 2020 elections and launch cyberspace offensives; securing US military and domestic networks; continuing to provide commanders across the world with highly sought-after intelligence, surveillance, and reconnaissance information; and planning for how their combined capabilities could help US forces avoid enemy air defenses.

At a JB San Antonio-Lackland ceremony, CYBERCOM Deputy Commander Vice Adm. Ross Myers noted the Air Force’s work to prepare US European Command for cyber warfare and its actions to stop interference in the 2018 midterm elections. That work set the military “on a path for the 2020 elections,” he said.

Election security is “a mission that, I will contend, will be enduring for the rest of time,” Myers said. “It is not one that will end in 2020.”

Sixteenth Air Force takes the place of 24th and 25th Air Forces, which respectively oversaw cyber and ISR operations, and are now deactivated. In addition to those fields, the new numbered Air Force will include electronic warfare, cryptology, psychological operations, the 557th Weather Wing, and the Air Force Technical Applications Center, which monitors nuclear treaty compliance.

Lt. Gen. Timothy Haugh, who won high praise at the ceremony for his multiple leadership positions in the cyber and intelligence worlds, is 16AF’s top officer. The Senate confirmed his promotion to lieutenant general Sept. 26—his second promotion since April.

By merging the two organizations, the Air Force aims to get a better understanding of what’s happening in the digital realm so it can more easily attack, defend against, and smoke out bad actors as the Pentagon turns to data- and algorithm-driven “wars of cognition.” Bringing them together opens opportunities for collaboration between the RQ-4, U-2, RC-135, Distributed Common Ground System, cyber, and other enterprises that have been stymied in the past, service officials argue.

“Starting today, 16th Air Force will be the thought leaders for operations in the information domain,” Air Force Chief of Staff Gen. David Goldfein said. “It will generate unmatched capabilities for air component commanders and joint task force commanders at a speed and scale like you’ve never seen before.”

Haugh said his priorities to meet that goal include establishing clear insights into a commander’s situation, tightly integrating with other groups across the Air Force, and competing while preparing to escalate into overt warfare. Goldfein told reporters that while the service must be ready to fight when needed, he believes 16AF can help de-escalate situations by leveraging its intel data and offering options other than traditional weaponry.

Leaders also argue 16AF could help deter conflict by openly naming and shaming those who cause problems in cyberspace and on the electromagnetic spectrum—domains where it is easier to be anonymous than land, air, and sea.

“As we partner with the joint cyber force, the power of Air Force ISR to uncover adversary malign activity will create even more opportunities to expose their destructive behavior,” Haugh said. “We will remove their plausible deniability on an international stage.”

In an Oct. 11 briefing with Goldfein, reporters, and other visitors, wing commanders who now fall under 16AF said their combined capabilities can inform the service about what other countries’ integrated air defense systems can do to American assets and offer ways to target them. IADS are a key consideration of future combat as the US mulls how it could wage war against Russia, China, and other nations with advanced air defenses and hostile airspace.

Commanders also pointed to cyber “munitions” that will benefit from a closer relationship with ISR, and an electronic warfare suite in development that would allow the US to get closer to its target. Col. Gavin Marks, commander of the 55th Wing, said his unit, which operates a range of niche ISR aircraft, stood up a team to pursue its own defensive cyber capability. Col. Brian Pukall, commander of the 557th Weather Wing, expects working in tandem with ISR forces will help the wing grow its ability to forecast adversaries’ weather conditions.

The Air Force’s information warfare architecture now mirrors that of the Navy. While Goldfein said he won’t speak for what the Army should do, he noted the Defense Department is starting to think about integrated information ops as a bigger part of the broader combat picture.

“Perhaps our adversaries are watching and listening today and taking note of where we’re headed,” Goldfein said. “I’m OK with that. … If we’re successful, perhaps our enemies will pause and question whether they can achieve their political objectives with the use of their military power.”

Goldfein told reporters in an interview that the Pentagon has moved away from the traditional notion of conflict in phases and toward the idea of competition, both militarily and economically.

“The important question we asked was, ‘Where is [Russian President Vladimir] Putin right now in terms of his phase in cyber, and where are we?’” he said. “One could argue we’re in shaping, and he’s in active combat operations. The discussion of phases … actually is unhelpful.”

But even as the Air Force wants to send a clear message to Russia that its new NAF is ready to compete in cyberspace, Goldfein said the US should look to collaborate with Moscow where it can on issues like space, science and technology, climate change, and the Arctic. Military-to-military relationships can stay strong even when diplomatic ties are strained, and if the Pentagon paints Russia as the enemy all the time, those opportunities may disappear, he said.

“As a joint chief, I do want to have a balanced approach,” Goldfein said. “Let’s be thoughtful about the world as it is and how it’s going to be, and make sure that we continue to provide thoughtful options to the commander in chief. … It’s not actually written anywhere that they have to take it, and I have to be OK with that.”