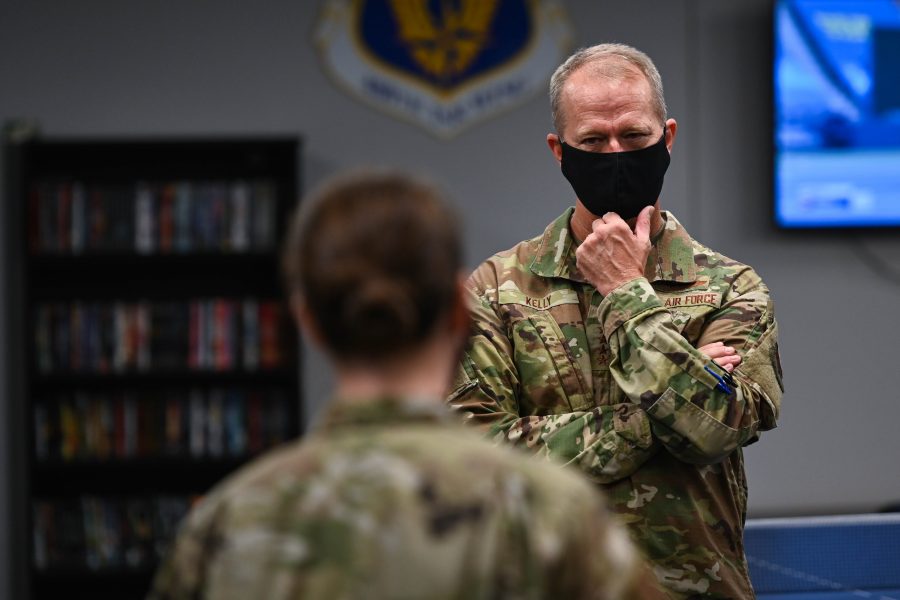 The combat air force must shift its culture from a focus on short-term combat to one of long-term competition, Air Combat Command chief Gen. Mark D. Kelly said Dec. 11. He is tasking 16th Air Force—the organization in charge of information warfare—with leading that transition.

Speaking at an online symposium hosted by the Air Force Association’s Langley Chapter, Kelly said he’s directed 16AF to shift the service’s focus “from primarily kinetic to … non-kinetic, from analog to digital, from conflict-focused to competition-focused, and from physical to cognitive.”

The new numbered Air Force was created last year to combine cyber, intelligence, surveillance, reconnaissance, and electronic warfare operations and related fields under one roof. Those areas are at the heart of future warfare that resides more in the “gray zone” than rising to outright combat.

Kelly indicated the Air Force should spend less effort on physical conflict, though it can’t walk away entirely. The service will “be in competition a lot more minutes, hours, days, months, years, than we are in conflict,” he said. “We can’t fail in the competition realm.”

That means the Air Force must get a better understanding of how an enemy thinks and acts, deter aggression that could further escalate, and repel constant cyberattacks.

“Take all of us, whether we go willingly, or kicking and screaming, into the non-kinetic competition,” Kelly said he’s told 16AF commander Lt. Gen. Timothy D. Haugh.

There have been suggestions—including from key lawmakers like House Armed Services Committee Chairman Rep. Adam Smith (D-Wash.)—that the U.S. military should subtly shift its focus from lethality to deterrence.

“The best way to deter somebody is to show you’re very lethal,” Kelly said, as well as “the intent to unambiguously draw lines about what’s acceptable and unacceptable on the global stage.”

He said the Air Force does a good job of organizing, training and equipping for “the most difficult combat.”

“We need to focus on day-to-day competition,” he said.

Those missions happen on a regular basis, such as MQ-9 Reaper crews that “fly around Syria every day, and they manage to work through the competitive jamming they get from our friends in Russia,” Kelly said. Bomber task force missions to the periphery of Russian airspace are “competition” missions as well, he said.

“I’m going out on a limb and expect there may be some more focus on competition with conflict, not at the expense of conflict,” he added.

Electromagnetic spectrum warfare already permeates everything the Air Force does, and it will increasingly represent the primary field of contention with peer adversaries, Kelly argued. Those assets not contributing to the fight in the spectrum—work like intercepting and jamming communications and frying enemy electronics— will actually be a drag on the force.

He noted that by the mid-2000s, most combat forces were on the Link 16 data-sharing system. “If you showed up without being on the link, you risked being in the way more than you were contributing” because of the risk of not being recognized by friend-or-foe systems and fratricide, he said.

The U.S. is less than a decade away from requiring AESA radars for fourth-generation fighters to “work through some robust electromagnetic spectrum challenges,” Kelly said. Without that, an Airman might “run the risk of being more a detriment to the fight than a contributor.”

The Air Force is being challenged from the very lowest frequencies of the spectrum to the ultra-high, Kelly said, and it will be a constant contest with other advanced militaries.

Actual combat in the EMS can’t be practiced on physical ranges with live-flying aircraft, Kelly noted. While the military does have the technology to do so, the Air Force wouldn’t be able to come up with enough money to so equip its ranges over the next 20 years, he said.

Moreover, the air traffic centers in Los Angeles, Calif., and Anchorage, Alaska—which abut USAF’s biggest training ranges—“are not going to let us jam that airspace to the degree that would be required to replicate the threat,” Kelly said.

Moving training into the synthetic environment will require multilevel security. The Air Force has finished an analysis of its options for “joint synthetic tactical air,” Kelly said, as the military pursues its ideal “Field of Dreams” for advanced training.

He added that he doesn’t want Airmen to see the most complex EMS threat “for the first time when they head into a peer fight. They have to see it before that, and the only place they can see it now is in the synthetic environment.”

The Air Force push toward EMS dominance will also likely mean that individual units and personnel will eventually be able to access the products of an Air Operations Center from anywhere, Kelly said. The Air Force collects far more ISR data than it can possibly use, and Airmen may begin doing much of the intel-crunching and sharing on their own.

“The AOC of the future will be less Walmart, a little more Amazon,” Kelly predicted. “You don’t have to go to a building to get your … all-domain awareness. I think we will start to make the infrastructure smaller and more mobile, and with the multilevel security to get at those different domains.”

That’s not to say people will get command-and-control apps on their phones, he added.

“I don’t think we have much of a choice,” he said. “We don’t have the manpower.”

Thirty years ago, using GPS for targeting was a strong idea, but it wasn’t clear whether that now-ubiquitous technology would become a must-have part of the kill chain. The use of AI will likely follow that path.

“Looking forward, I don’t think there’s very much turning around” from a future where AI is crucial to targeting and attacking, Kelly said.