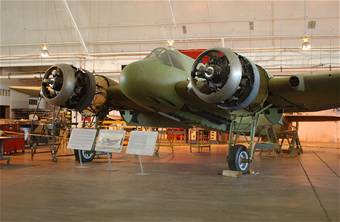 The British night fighter aircraft known as the Bristol Beaufighter has found a home at the National Museum of the US Air Force in Dayton, Ohio. Technicians at the museum restored the aircraft, which first entered service as a day fighter in July 1940 with the Royal Air Force. By September 1940, when Nazi Germany began its blitz attacks on Britain, the night fighter version emerged and eliminated more than half of the Luftwaffe bombers shot down during the blitz. Without a US-made dedicated night fighter, US Army Air Forces night fighter squadrons flew the Beaufighter.