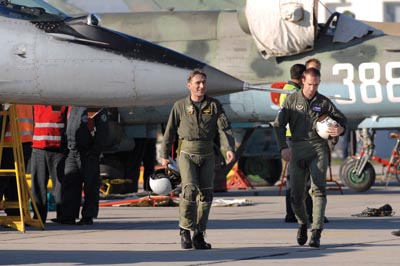 US airmen from the 510th Fighter Squadron at Aviano AB, Italy, joined Bulgarian airmen for a three-week exercise called Rodopi Javelin 2007. It’s the second time the 510th FS has trained with the Bulgarian Air Force, reports Capt. Jennifer Ferrau. The F-16s of the 510th FS flew with Bulgarian MiG-29s, practicing low-level flying, air-to-ground gunnery, and basic fighter maneuvers. Brig. Gen. Rumen Radev, the commander of Graf Ignatevio Air Base, the site for the exercise, said that his airmen “are much improved” since they first flew with the 510th FS. He believes the Bulgarian base has much to offer, including “plenty of airspace, contemporary facilities, low-level training and great training ranges.”