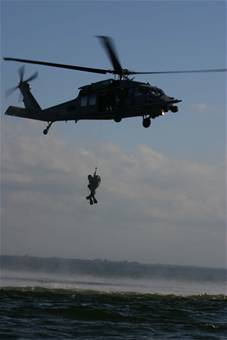 More than 300 airmen from seven USAF bases joined forces last week at Avon Park Air Range and MacDill Air Force Base in Florida to participate in the first ever Air Combat Command rescue exercise, utilizing ACC’s full spectrum of rescue airmen and aircraft. Atlantic Rescue comprised airmen—pilots, pararescuemen, planners, and survival, evasion, resistance and escape specialists—and aircraft, including A-10s, C-130s, HH-60 helicopters, and E-8 Joint STARS, from a variety of bases. Said exercise director Col. Fred Guendel, “Atlantic Rescue gives ACC the tools it needs to prepare CSAR forces to accomplish their mission in any scenario.” He noted, too, that, since the beginnings of operations in Afghanistan and Iraq, Air Force CSAR forces have “performed 290 missions and rescued more than 620 personnel from all services and numerous coalition forces. … It doesn’t matter who or where the person is, no one is left behind.”